The Controversy over The Killer Inside Me 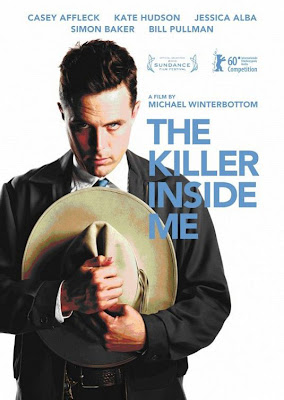 I've been following the filming of director Michael Winterbottom's adaptation of Jim Thompson's The Killer Inside Me for some time now. Most of the recent news has centered around a brewing backlash against the film's graphic misogynistic violence.

Until I see the film itself, obviously, I can't have an opinion of it. The trailer is pretty hard stuff to watch, but I'll simply have to wait to judge the complete work.

I have two preliminary thoughts about this controversy, though.

First, I come at this subject with a deep hatred of misogyny. I've known, and loved, too many people who have been victims of rape, sexual assault, and domestic violence. I won't abide a film that traffics in titillating images of misogyny. The root of half the world's problems, it seems to me, is to be found in the fragile male ego and its simultaneous attraction to and revulsion of the female ego (and the female body). I can't stand to watch scenes of rape and sexual humiliation, and I often avoid films with these elements. If I do end up in a movie with this kind of material, I usually have to stare at the floor in the theater. Depending on how it's done, male-on-female violence either sickens me or enrages me.

Second, I love Jim Thompson. And part of what I like about Thompson, frankly, is that he's really good at probing the minds of woman-hating nutjobs like Killer's Lou Ford. The book I consider his masterpiece, A Hell of a Woman, is about the bifurcation of just such a mind.

Which brings us to the essential underlying question: is the onscreen depiction of an act a de facto celebration of that act? To put it more pointedly, can you show violence onscreen without glamorizing, sexualizing, or celebrating that violence?

It's a good question. Truffaut famously said that there was no such thing as an anti-war movie because war invariably ends up looking exciting onscreen. There's something to this observation, at least about war movies. The essence of drama, Howard Hawks once noted, was the fight to stay alive. In a war movie, no matter how gruesome or gory you make it, it's exciting to see people fight to stay alive. It is, in a word, dramatic.

Sexualized violence is a different story, it seems to me. Here we're talking about sadism, which is not the fight to stay alive so much as the receiving of pleasure from the pain of other people. This can be presented in a way that frightens rather than titillates. Of course, it can, and often has, been presented as titillation as well.

Are we to suggest that images of such violence, even prolonged graphic images of such things, are in and of themselves harmful? I don't know, but I don't think so. Perhaps my chief example here would be the brutal rape scene in Boys Don't Cry. This is one of those scenes that I simply can't stand to watch, but I think it is in the film to elicit our rage against the act and our empathy for Hillary Swank's character. It's also there to shed light on the psyche of the two rapists (whose repressed homosexuality figures into their assault). It's a gut-wrenching scene, but it's supposed to be a gut-wrenching scene.

One could argue that the bloodless wholesale PG-13 slaughter that we see in big budget action and horror films does far more to desensitise us to violence than what we see in the hard R of something like Boys Don't Cry. Whether or not The Killer Inside Me is misogynist trash or a serious exploration of a sick man remains to be seen. Either way, I have no problem with calling it like I see it. I hope the film is a masterpiece, but if it's garbage I'll be willing to call it garbage.

I'm glad that there are forums like Jezebel out there that are providing commentary on such things. Movies matter. Images have power. And patriarchy in all its forms needs to be challenged.

But it's too early to tell about this film. Context matters. The novel is the story of a man who kills people, mostly women. If such a story doesn't disturb then the filmmakers have failed. We should not be able to sit passively and watch a woman be beaten to death without feeling horrifed. I'm ready to go through that expereince if Winterbottom and his cast and crew are taking me somewhere ultimately worth going. If they don't, or if they simply fail, then I'll certainly say as much.

At the end of the day, as with any movie, everything will come down to the movie itself, the juxtaposition of images and sound within the frames of the film.

I also consider "A Hell of a Woman" Thompson's masterpiece.

Thompson's exploration of violence is complex and unarguably disturbing. I also haven't seen the new "The Killer Inside Me," but I think it is going to be difficult to show the brutality of the characters without overly sensationalizing it.

Cullen, do you think that's due to the nature of the visual medium? Does violence--even one-sided sadism of this sort--automatically translate into sensationalism onscreen? I worry about this. Is it actually more effective to have the camera look away?

Of course, I suppose it's worth remembering that Thompson's work has always had these dangers. He wasn't writing for library book clubs, after all. He was writing for the sex and blood pulp markets. Straddling the line between art and trash is his whole damn metier.

If the trailer that I saw is any indication, this flick will be far from sensationalized, and oddly enough, I was thinking shades of Boys Don't Cry as I was watching said trailer. So I think it'll be brutal yet worth it, not unlike Boys Don't Cry.

Considering Winterbottom's track record as a director, I have a bit trepidation regarding the misogynist scenes being portrayed sensationally or overly sexualized as opposed to the acts of violence they actually are.

Good question, Keith. I don't know, of course. I think you come up against the fundamental difference between lit and film, though. A picture is worth a thousand words, and film is 24 pictures a second. That's a lot of info, a whole heap of text and subtext.

On the page, Thompson is brutal, but if he was showing it...who knows? I'm a big believer in less is more. I reckon that's why I prefer old movies. It's not a prudishness--I'm pretty salty myself--I just think implication and insinuation engage the reader/viewer more. Thompson can be a vicious writer, but usually he holds back when it is the more effective way to go.