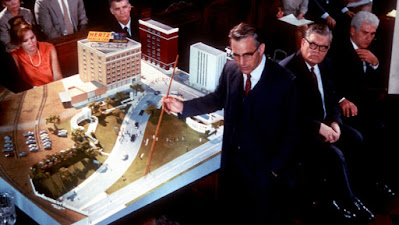 Can a film fail to achieve its stated goals and still be considered good--even great? On the basis of Oliver Stone's JFK, the answer is yes. Stone wanted his movie to implicate the Dallas police, the mafia, the FBI, the CIA, the military-industrial complex, and the White House, up to and including Vice-President Lyndon Johnson, in a massive conspiracy to kill President John F. Kennedy. Stone points a lot of fingers, often in different directions at the same time, without making a coherent argument for his theory. Yet the film itself is a fine piece of filmmaking, a passionate mystery told on a grand scale. It's also something else Stone didn't really intend, a masterpiece of American paranoia.

Stepping away from Stone's film for a moment: based on all the available evidence, the only reasonable conclusion is that Lee Harvey Oswald acted alone. Every serious study of the case seems to lead to this conclusion. I say "seems" because I'm not positioning myself as an expert. In terms of specifics, I base my opinion mainly on Gerald Posner's 1993 study Case Closed: Lee Harvey Oswald and the Assassination of JFK, a book that makes a thoroughly convincing case for Oswald's guilt by following the physical evidence, sticking as much as possible to primary sources, and detailing the short, troubled life of Lee Harvey Oswald himself.

Stone's film, by contrast, is a whirlwind of hearsay, hunches, slanders, speculations, conflations, obfuscations, and outright fantasies. It is a deeply dishonest film from start to finish. As a piece of historical fiction, it is 95% fiction.

It is also (deep breath): sharply directed, wonderfully acted, imaginatively written, and brilliantly edited. As a piece of filmmaking, it is a triumph.

So where does that leave us? If JFK is a mosaic of brilliance and bullshit, what does it add up to? Stone's own claims for the film have receded over time. In recent years, he seems to have settled for calling it a "counter myth" whatever the hell that means.

This brings us to the distinction (always important to point out) between what an artist intends and what they actually create. A film is an object, and it exists in and of itself. Once created, it has a life of its own.

Watching JFK in November 2020 is a particularly surreal experience. If Stone's goal in 1991 was to undermine confidence in the government, the press, and the whole concept of shared facts, then we are truly living out the consequences of a loss of faith in those same things. As I write this, the President of the United States is attempting to pull off a political coup by throwing last week's election of Joe Biden into doubt. It doesn't matter that Trump's starting with his conclusion (essentially "I could not have lost the election") and working backward to find anything that can be used as evidence to support that conclusion. He began ringing this bell four years ago when he lost the popular vote. Unable to win a majority of votes, he's been insisting his entire term that his loss at the polls can only be evidence of fraud. He now has the entire apparatus of the executive branch trying to cobble together something that looks like proof.

With this in mind, Stone's Jim Garrison (played to perfection by a rarely-better Kevin Costner) is a hero for the age of Trump. In real life, Garrison was a thoroughly discredited, attention-seeking crackpot. (One of his first theories, as he explained it to journalist James Phelan in 1967, was that the plot to kill Kennedy was a "homosexual thrill killing," which is what led him to hound people like David Ferrie and Clay Shaw, innocent men whose lives were pretty much ruined by Garrison.) Stone's Garrison, though, is an American archetype: the one good man able to perceive the dim candle of truth flickering behind a black veil of lies. Or, really, I should say veils, plural, because in this movie America--its institutions, its government, its culture, its very history--is just one black veil draped over another. Stone's film postulates a worldview where a man's suspicions are the only truth he needs. That's pretty much the operating conviction of about half of America at this point, a national paranoia in place of a national faith.

In JFK, Stone is never able to wrangle all of his suspicions into a workable theory of the assassination because every conspiracy theory creates too many dead ends or contradictions. So instead he creates a Frankenstein theory that stitches together a bunch of disparate theories. At one point in the epic courtroom scene at the end, Garrison speculates that Oswald was in the book depository on 11-22-63 to "either take part in the assassination or to stop it." This is a massive shrug in place of an answer to the central question of the film. Yet, here again, the brilliance of the film is that it knows it doesn't need to provide answers. The questions are all the proof that's required to accomplish Stone's goal of convincing his audience that the truth is hidden and everybody but him is lying about it. That sense, of a world controlled by dark, unseen forces, is the defining ethos of America in 2020.

At the heart of Stone's film, and the entire JFK conspiracy mill, is a refusal to accept that Kennedy's death was meaningless. In a way, this denial is understandable. After all, Lee Harvey Oswald was a disturbed nobody who bought a cheap gun through the mail and then murdered the most powerful man in the world. The only idea more disturbing than the idea that he changed history is the idea that he did it for no good reason at all. In disillusioning an entire generation and essentially handing the presidency to Lyndon Johnson, he arguably made more of a lasting impact on American culture than JFK himself. That's an ugly reality, one that people have never been content to accept. Stone's film--like all conspiracy theories--is really an attempt to make sense of the senseless. After all, if JFK was killed by the CIA and the military-industrial complex because he was going to pull troops out of Vietnam, then he died a hero's death, a martyr's death. If, on the other hand, he died because Lee Harvey Oswald wanted to be famous then he died a meaningless death, shot in the back of the head by an idiot.

In his final courtroom summation in the film, Costner's Garrison paraphrases Tennyson and implores the jury, "Do not forget your dying king." In lifting up the murder of John F. Kennedy to the status of regicide, Stone places these events into an almost mythic context: a great king betrayed by a powerful web of enemies hidden in plain sight all around him. It doesn't matter that Stone's film is a patchwork of nonsense. JFK has the feel of an expose` that is revealing a dark and complex truth. Instead, Stone captures something else entirely: the distinctly American tendency to stubbornly refuse to accept the truth.