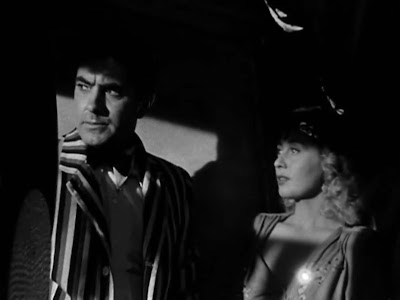 Every so often in film noir, a carnival passes through town. From the sharp-shooting sideshow in Gun Crazy to the jolly deathwatch in Ace in the Hole, the inhabitants of the City of Perpetual Night enjoy a fun diversion every now and then. But while they like a good carnival, they never seem to really embrace the carnies. Even in Loserville, carnies are outcasts.

The best movie about these travelling, fast-talking charlatans is Edmund Goulding’s Nightmare Alley. Based on the novel by William Lindsay Gresham, it tells the story of Stan Carlisle, an ambitious young carnie who wants to set himself up as a mind reader with the help of an experienced performer named Zeena (Joan Blondell). Zeena knows all the ticks of the trade, having enjoyed a big career as a clairvoyant with her partner Pete (Ian Keith) before he began to hit the sauce too hard. Although Pete is clearly in the final rounds of a losing battle with alcoholism, Zeena is reluctant to abandon him. Besides, she intuits, correctly, that Stan has designs on a pretty young performer named Molly (Coleen Gray).

Then one night there is a mix up with bottles, and Pete has his fatal last drink. Stan feels responsible for Pete’s death, but he gets over that pretty quick when Zeena gives him the secrets to the mind reading act. He ditches Zeena, steals Molly away from her strongman boyfriend Bruno (played by everybody’s favorite dumb lug, Mike Mazurki) and sets off to find his fame and fortune.

The success Stan finds is huge and nearly instantaneous. As The Great Stanton, he reads minds in high society dinner clubs. One night this brings him into contact with a shady psychologist named Lilith Ritter (Helen Walker). Stan’s immediately drawn to her, struck instantly by the irony of their overlapping magisteria. He suggests they join forces. Lilith has a lot of rich, emotionally scarred patients, Stan notes. If she were to feed him information about them, he could pretend to minister to their deepest desires. An old woman who misses her long-dead daughter can be told, for instance, that the daughter is contacting her from beyond the grave. A tycoon in love with a woman long since gone, can be told that she still loves him from the grave. It’s a great plan except for a couple of things: 1) Molly is a little too good to go along with such manipulations, and 2) Lilith is a lot smarter, and a lot more ruthless, than Stan suspects.

Nightmare Alley is an impressive critique of two strands of the American character: our obsession with overnight success, and our fixation on trendy spiritualism. With the first, the film paints a picture of a ruthless climb to the top. Stan starts at the bottom of the entertainment food chain and works his way up to the higher echelons of respectability. Of course, we have to see him fall. This is film noir, after all, but it’s interesting how often we like to see this play out. It’s the bifurcation of the American mind when it comes to success. We love to see people get rich quick, but just as often we love to see their hubris bring them down.

As to the second strand, Nightmare Alley observes how ready we seem to be to find new ways of contacting the Great Beyond. America is the land of new religion, of course, and beneath the calm Protestant face of officialdom, we have always harbored a bubbling sense of spiritual curiosity. From Mormonism to Scientology, America has always been fertile ground for new religious thinkers and/or charlatans, and Nightmare Alley demonstrates how easily parlor tricks and intuition can be passed off as the newest revelation from on high.

The film was adapted from Gresham’s novel by the great Jules Furthman (The Big Sleep) and directed by Edmund Goulding. It’s a deliberately paced film, almost sluggish at points, and employs a slow fadeout at the end of most scenes. This works to its advantage by the end, when Goulding wants the film to develop a mesmerizing spell on the viewer. For the most part, it has developed such a spell, and the final scenes have a hypnotic power. A lot of credit needs to go to veteran cinematographer Lee Garmes’ extraordinary lighting and to the impeccable art direction by J. Russell Spencer and Lyle Wheeler. This is one of the best looking film noirs you’ll find.

It’s also one of the best acted. As Stan, Tyrone Power manages the neat trick of being uncompromisingly flawed while still maintaining his appeal. Stan’s an attractive character because while he is ruthless, he’s not vindictive. Power is surrounded by an impeccable cast. Joan Blondell is earthy and believable as Zeena, while Coleen Gray is as perky and likable as always as Molly. Gray had a way of selling this kind of role without shortchanging the character’s intelligence (and, in the interest of thorough reporting, I should note that she looks drop-dead gorgeous here). Ian Keith carves out his own space in the movie as the drunken Pete. His performance, about as harrowing an image of alcoholism as you’ll see in a film noir, makes the act of drinking alcohol look grotesque. And the cast is rounded out with an extraordinary performance by underrated femme fatale Helen Walker as the manipulative shrink, Lilith. Walker had a tragic life offscreen, but in this, her best role, she’s an icy beauty exuding intelligence.

Nightmare Alley is a damn good piece of work. It’s a little slow, and the setup for the ending promises a little more than the actual ending delivers (Stan’s final degradation is so implied it’s hard to tell exactly what it consists of), but these are small concerns. This is an odd, darkly beautiful film.

The new issue of Crimefactory has an excellent article by Jimmy Callaway on the novel Nightmare Alley and its tormented author.

The story has also been turned into a stage musical of all things. It's playing right now at the Geffen Playhouse.

Coleen Gray is quite likely the foxiest born-again Christian ever to come out of Hollywood.

A musical?!!! So there is hope for my musical IDI! about Uganda's madcap dictator.