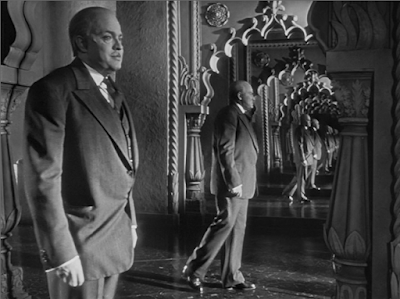 Poor Rick Rojas. A couple of weeks ago he was just a reporter for the New York Times. Then he made the mistake of going on Twitter to trash CITIZEN KANE. By itself, taking a shot at the Orson Welles classic isn't really such a big deal, of course. Ever since it was enshrined as "The Greatest Movie of All Time" by cinephiles back in the 60s and 70s, it's been fair game for iconoclasts and contrarians. But Rojas went on to say that he had a policy of not watching any movie made before 1975. Reaction, as it often is on Twitter, was swift, fierce, and completely out of proportion. Even TCM dunked on this guy. And keep in mind, Rojas isn't even a film critic. He's just a dude who tweeted out something goofy.

What do I think about the goofy thing he tweeted? Well, I have a few thoughts.

4. But I'm assuming 1975 was an arbitrary date. Again, we're talking about a random tweet by a guy who probably didn't anticipate the shitstorm of movie geek outrage he was unleashing with his hot take. So why does it matter? Well, it doesn't actually matter, of course. But...

5. This IS part of a larger discussion about movies. No one knows what the future of movies looks like. Even pre-Covid the movie business was experiencing massive shifts and facing major challenges. But the history of film is there for all of us. Human beings have been making movies all over the world for well over a hundred years. There is so much to experience. Which isn't to say that it's for everyone. Again, no one is obligated to like anything. But watching an old movie can be a fascinating experience precisely because they're made in a style that isn't the current vogue. They contain different ways of telling stories, featuring different acting styles, and are photographed in ways that simply don't exist anymore, even when modern day filmmakers do their best to imitate the old studio look. Nothing looks like CASABLANCA. It's a foreign object. (And this is to say nothing of silent movies, which play like artifacts from another planet.)

I think of classic movies like classical music. Not everyone likes Beethoven. And, hey, you don't have to. No one's obligated to like anything. But, man, Beethoven was pretty amazing.

And so, by the way, was Orson Welles.

P.S. It's worth adding that when we have these kinds of discussions in the West we tend to have a Hollywood-centric view of things. Thus, the failures and sins of classic American films in terms of representation (both in the general omission of people of color both in front of and behind the camera much of the time, and in the commission of racist, sexist, homophobic stereotypes) tend to overshadow an important point: "classic cinema" is world cinema. So when we talk about movies made before 1975, we're also talking about the work of African and Asian filmmakers, we're talking about the work of women around the world, and we're talking about the history of queer cinema, a legacy that extends back to the silent era. The world of pre-75 cinema is a world that is rich and large and virtually inexhaustible. Go get you some.