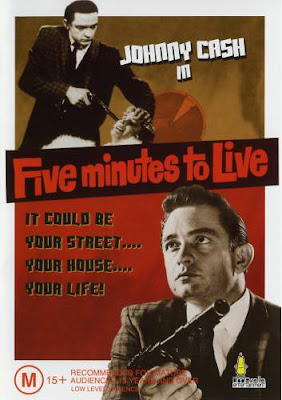 I’m a lifelong Johnny Cash fanatic. Like Cash, I was born and raised in a devoutly Christian home in rural Arkansas, and early on I made a connection to his music despite the forty-three year gap in our ages. The Man in Black always seemed to be singing songs for me, and I’m proud to say that I was a Cash obsessive before his “rediscovery” made him fashionable again in the early nineties. Cash was always cool to me.

So when I found out that his first starring role in movies was as a psycho in a film noir called Five Minutes To Live, I was giddy. What could be better than badass Johnny Cash stomping down the dark streets of some southern fried noir? My enthusiasm, however, didn’t survive contact with the movie itself.

The film is a cheap little production, told in flashback, about a nutjob named Johnny Cabot (Cash) who’s recruited for a bank robbery by a hood named Fred Dorella (Vic Tayback, before he became Mel the diner owner on Alice). Dorella’s plan is to kidnap the wife of a bank employee and then force the husband to cash a forged check for $70,000. Dorella chooses a banker named Ken Wilson (Donald Woods). Dorella follows Wilson to work and sends Cabot to take Mrs. Wilson (Cay Forrester) hostage. Once Dorella makes contact with Wilson, he calls Cabot and lets Wilson speak to his wife to confirm the threat. If Dorella doesn’t call Cabot back within five minutes to tell him that Wilson has cashed the check, Cabot will kill Mrs. Wilson.

As a rough outline for a plot, this isn’t bad. Unfortunately, just about every aspect of its execution is flawed. Tayback is serviceable as Dorella (though, through no fault of his own, I kept seeing Mel Sharples when he appeared onscreen), but the rest of the cast is pretty bad. Donald Woods can’t muster much enthusiasm for his role as the banker and plays it like a poor man’s Dick Powell. Mrs. Wilson is played by Cay Forrester, a familiar face in noir (she was the salesman’s flirtatious wife in DOA). Interestingly, Forrester wrote the script for the film, but she doesn’t seem to have given her part much thought. You’d think that Forrester would make her character a little proactive, but Mrs. Wilson is clueless in the first half of the film and hysterical in the second half. There’s a brief moment where she seems to snap into action—putting on a negligee and attempting to seduce Cabot—but it passes over in a minute or two and she goes back to screaming.

But all of this is beside the point, really, since the main attraction here is Cash. I can imagine a vehicle in which his essential persona—the unhinged country boy with Jesus on one shoulder and Satan on the other—could be made to work. Think of him in a adaption of a Flannery O’Connor story, and maybe you’ll see what I mean. I still say that Cash could have been an effective character actor. Unfortunately, this movie provides little evidence for my claim.

Occasionally, you’ll come across defenses of his performance in the film, but I’m sorry to say that these apologetics are essentially misguided. While it’s true that Cash himself makes for a fascinating point of interest—looking razor thin and twitchy, he was already well into his drug-fueled hellion days—it cannot be said that he gives a good performance. His delivery alternates between too much and too little, and you can catch him committing the cardinal sin of acting—waiting for other actors to finish their lines so he can deliver his. He never seems fully in a scene with another performer. Waiting to say his lines, he never seems to be thinking, or feeling, much of anything. Acting, the old saying goes, is mostly about reacting. Cash never reacts to anything in the movie. Watching him here, I was struck by the contrast between his performances and the film performances I’d seen of Elvis. Of course, Elvis was always considered a bad actor—and he wasn’t too good, it’s true—but the camera loved him. Much like Bruce Lee, Elvis was more of a presence in a movie than an actor. He was, in short, a movie star.

Cash wasn’t a movie star, and he wasn’t much of an actor, either. Having said that, his fans will want to see this movie. As a drama, it’s flat and uninvolving, but as documentary footage of the man at the embryonic stage of his legend, it’s fascinating. I suspect part of the reason Elvis, for all his limitations, was a better actor than Cash was because, as a bigger star, Elvis received more acting instruction. Here, Cash looks like he just wandered onto a movie set and picked up a gun. It’s a telling choice of roles, of course. While Elvis was playing wholesome good boys who danced and romanced in Hawaii, Cash was gunning down cops and slapping around housewives. This movie isn’t very good, but you can see the origins of the badass myth already well in place.
at 6:36 PM

I thought Cash was pretty darned good in that tv movie, 'Murder in Coweta County.' Although I have to admit I haven't seen it since it first aired however many decades ago.

God, I saw that years and years ago. That was a good flick as I recall. Cash was a cop, right? And Andy Griffith was a killer? May have to hunt that one down. Thanks, Corey!

Yes, that was the one. Andy Griffith was amazing in it, I never had thought of him doing a bad guy before then, but he was scary and convincing.

Wasn't a hit man in The Punisher film based on Cash?