The Second (or is it the Third?) Coming of Jim Thompson 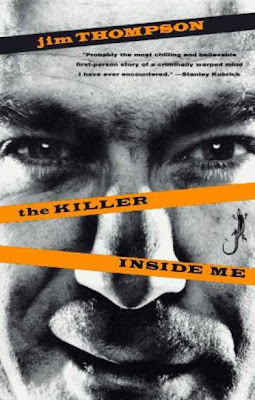 For those of us who think that roman noir doesn't get much better than Jim Thompson, there is great news out there in Hollywood that Casey Affleck is going to be starring in an adaption of Jim Thompson's The Killer Inside Me. This great news for three reasons:

1. Jim Thompson was the greatest postwar crime novelist. No one was better at capturing the sick underbelly of American society during the Eisenhower years (and beyond). The Killer Inside Me is widely considered to be his best book, the archetypal serial killer story. Now, I have to admit that I've never been that big a fan of this particular book. I have other favorites. A Hell Of A Woman is, I think, his most complete novel--a brutal character study of a misogynist who gets what's coming to him. Savage Night, the story of the undoing of a hitman, is Thompson's most surreal trip (the last twenty pages are insane). After Dark, My Sweet is an oddly effecting Thompson romance of all things, a rare example of him writing about flawed but essentially good people. The Getaway is perhaps a little too consciously arty, but there are worse things you can say about a book. The Killer Inside Me is a fine novel, but JT told essentially the same story in Pop. 1280, a book I find more compelling. Still, I must say, the idea of an adaptation of Thompson's most highly praised novel is exciting. I'm totally open to a film that takes the story and interprets it into something great. Which has been done before...

So, there are at least three great Thompson movies out there (I have not seen Maggie Greenwald's The Kill-Off, nor Serie Noir, Alain Corneau's French adaptation of A Hell of a Woman; I have seen both versions of The Getaway, about which the less said is better). Thompson's work has proven to be extremely adaptable.

3. It looks like he's got a good crew of adapters this time around, too. Casey Affleck is a potentially brilliant choice to play Lou Ford, the small town deputy sheriff who moonlights as a serial killer. Last year, Affleck turned in a strong performance in his brother's tight, smart neonoir Gone Baby Gone. Even more impressive was his performance in Andrew Dominik's vastly underrated revisionist western The Assassination Of Jesse James By The Coward Robert Ford (a film I recommended a couple of months ago). In his portrayal of Robert Ford you get a sense of the duality Affleck could bring to Thompson's most notorious two-faced killer. He'll be joined by Elias Koteas and Jessica Alba. The screenplay, encouragingly, is by Andrew Dominik and directed by Michael Winterbottom.


Filming begins in January. Keep your fingers crossed. In the meantime check out these cool ass sites:


The Killer Beside Me: The Jim Thompson Resource Page

Bleeker Books' Page On Thompson-Lots of good links on this one
at 10:11 PM

Oh BTW, The Kill-off(JT does Peyton Place) is a very good film.