Mug Shots #9: Gene Tierney AKA The Nothing Woman 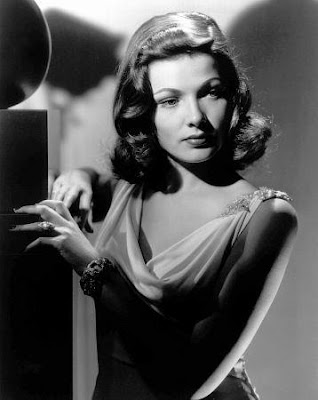 She was exquisitely beautiful, but there was also something oddly distant about her, a vacancy that was its own attribute. We see it on display in her two most famous roles: in Laura, she is perfect as the blank canvas others project themselves onto, her passivity becoming a point of obsession for the rest of the cast. In her career-best performance in Leave Her To Heaven, John Stahl uses her emptiness to personify a vast pit of obsessive neediness as Tierney places one of the most shockingly cold-blooded femme fatales on record.

Best of the Rest:
Night And The City
Where The Sidewalk Ends
Whirlpool
Advise And Consent

Tierney had a complicated and tragic private life--guilt over an institutionalized daughter, a descent into mental illness--that is a rebuke to the lesser problems of many celebrities. Here's a documentary on her life.
at 7:20 AM 1 comment: 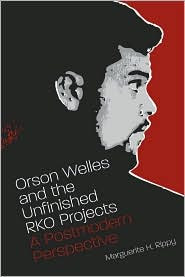 I recently had a chance to interview scholar Marguerite Rippy about her fascinating new book Orson Welles and The Unfinished RKO Projects. It's not every director who can inspire a critical appraisal of works that never reached fruition, but, Welles wasn't just any director. You can check out my interview with Marguerite Rippy over at Wellesnet.
at 7:20 PM No comments: 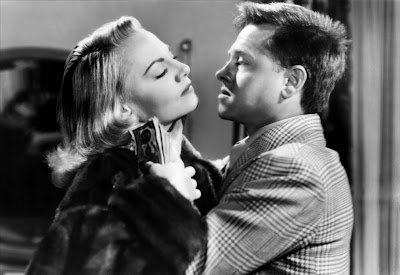 For most of its running time, Quicksand marches in lockstep precision toward its protagonist’s doom. That the film sputters out of gas toward the end is too bad, but Quicksand is hardly unique in that respect. Many of the films we call noir have the same failing. What is unique about this movie, however, is that while most noirs chart the gradual disintegration of their characters’ fortunes, few do it with such exactness.

The film stars Mickey Rooney, just three years after his penultimate Andy Hardy movie, as a regular guy mechanic named Dan Brady. In the opening scene Dan is eating at a greasy spoon and explaining to a couple of buddies why he’s been blowing off his girlfriend, Helen. He's just not ready to settle, he says. Then another woman walks through the door. She’s blonde and beautiful, and as cold as midnight. Her name is Vera, and like all women named Vera in film noir, she seems to have just wandered in from Hell looking for a man to take back with her. Dan volunteers to go with her because he’s too dense to see that all Vera really wants is a two thousand dollar mink coat. He can’t even afford to take her out to the boardwalk, so he lifts some money from the cash register at work. That sets into motion a nightmarish chain of events. Every move Dan makes only gets him in deeper and deeper, but most of the time his decisions seem to make sense. His mistakes are huge, but it’s easy to see how and why he makes them.

Quicksand is richly populated with nice character parts, a testament to the strong original script by Robert Smith (99 River Street). Peter Lorre plays Vera’s old boss—a sleazy boardwalk operator with whom she clearly had more than a working relationship. If Dan was smarter, he might ask himself why Vera would lead him to Lorre’s arcade on their first date. Art Smith plays Dan’s boorish boss, a guy who starts out as a jerk and ends up as a villain. And Taylor Holmes issues a curious performance as a lawyer near the end of the film. His character seems slightly sinister--something to do with the way he intones lines like, “Men don’t die easily. They take a lot of killing.”

At the center of the movie is Dan’s relationship with both the bad girl and the good girl. As Vera, Jeanne Cagney (baby sister of James no less) is a piece of work. She’s beautiful, but she’s got a hard edge from the beginning. Vera couldn’t fool just anybody, but she twists poor Dan Brady to her will without breaking a sweat. When the time comes for her to sell him up the river, it only seems natural.

As the good girl, Helen, Barbara Bates gives the film’s oddest performance. Helen isn’t just a sweet gal in love with a dope, she seems genuinely like a masochist. Near the end of the film, Dan confesses to a series of crimes that should send even most the lovelorn girlfriend screaming to the cops, but Helen responds by declaring a love for her man that lapses into delusion. She seems like one of those sad women who write love letters to imprisoned serial killers they’ve seen on the news. In real life, Bates suffered from a crippling depression which eventually led to the end of her career in films and later to her suicide in 1969. She makes for a sad, strange screen presence.

As Dan Brady, Mickey Rooney manages the difficult task of distancing himself from his iconic cheerfulness. He had been Hollywood’s biggest (albeit shortest) star for much of the thirties and forties, but by 1950 the country had taken a turn for the noir, and Rooney tried to go with it. At the time, the public wasn’t having it, but as the years go by I wonder if his noir work (Drive A Crooked Road, Baby Face Nelson) will have more longevity than his light thirties fare. Rooney never had a Wizard of Oz-sized phenomenon like Judy Garland, and I don't think he's had the staying power of Shirley Temple. (Does anyone watch Andy Hardy movies anymore?) Part of what Rooney brings to Quicksand is a little man’s insecurity and bluster. Dan’s a dope and doesn’t know it, and that’s exactly as it should be. I can’t tell how much of this quality is intentional and how much of it is Rooney’s forced attempt to be taken seriously as a leading man, but either way the results work.

Until the end, the entire movie works. Director Irving Pichel directs with style and restraint. The scenes in Lorre’s cheap arcade have the stink of cigarettes and sweat on them, and the big robbery scene is a taunt piece of suspense. Pichel keeps an oddball cast going strong, and the movie nearly makes it across the finishing line. Alas, it stumbles a bit at the end with a goofy deus ex machina (the lawyer’s final speech is pure hogwash), but like any good film noir, Quicksand has already made its point: an ordinary man can make one mistake that sets into motion a chain of events that will destroy him. Point taken.

You can watch the film here.

Rooney's chances of being remembered for his thirties work might be hurt by the fact that a huge part of the modern audience for old fashioned song-and-dance flicks are gay men. And Mickey's been vocal about not liking gay folks too much. Here he is expressing some political/social views that are unlikely to endear him to friends of Dorothy.