As near as I can tell, there's no one quite like Cullen Gallagher out there mixing it up on the internet. Gallagher is better known to hardcore noir geeks as the brains behind the blog Pulp Serenade, a treasure trove of old and new crime fiction. On a nearly daily basis, Pulp Serenade churns out reviews of long (looooong) lost pulp novels and spotlights offbeat contemporary authors. Gallagher is a perceptive critic and a dogged archivist/historian. His joy in discovering a new dusty old dime novel is palpable and infectious.

Just last week, he unveiled a new series he's doing on critical perspectives, looking at the original reception of classic crime fiction. His first entry was an overview of writer Day Keene.

Lastly, Gallagher also contributed the fascinating essay "A History of Pulp" to the new anthology Beat To A Pulp: Round One.

Email ThisBlogThis!Share to TwitterShare to FacebookShare to Pinterest
Labels: books 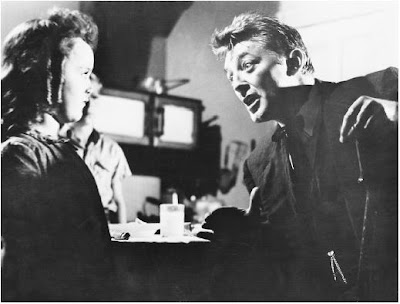 The opening scenes of The Night of the Hunter play like something out of a Flannery O’Connor story—a Southern Gothic spin on film noir—but by the end it has turned into something much more. It is a rich, scary, brilliant movie.

Robert Mitchum plays a woman-murdering preacher named Harry Powell who travels the countryside with LOVE tattooed on one hand and HATE tattooed on the other. He gets tossed in jail for theft and while he’s there he shares a cell with a condemned murderer named Ben Harper. Not long before he’s executed, Harper talks in his sleep and discloses the existence of some money he left hidden with his young son and daughter, John and Pearl. After Powell is released from prison, he heads off to find the children and the missing money.

He’s lucky to find the kids living with their widowed mother, and luckier still to discover that she’s played by Shelley Winters, that embodiment of needy cluelessness. It doesn’t take him long to convert her into a guilt-ridden religious fanatic and seduce her into marriage. Once he’s moved into the house, he goes to work on the kids to find out where they’ve hidden the money.

John and Pearl are played by Billy Chapin and Sally Jane Bruce. Among the interesting things about The Night of the Hunter is that it is one of the rare noirs about children. Most kids in noirs are props, exploited as symbols of domestic tranquility. In this film, however, the kids are a little weird. Neither Chapin nor Bruce are cute in a conventional sense and neither of them give cute performances. The movie features them as protagonists in a stylized nightmare, and in some ways The Night of the Hunter looks and feels like a child's storybook--albeit a weird one.

Consider the plot from their point of view. Their father is a crook, executed for his crimes. They are outcasts among other children because of this fact. Their mother means well, but she is lonely and sad. Then a man shows up. He marries their mother and moves into the house. But he always wants to be alone with them. Every time their mother is away, he goes up to their bedroom. He interrogates them in different ways. He puts the little girl on his lap, flirts with her almost. He makes the boy stand in the center of the room while he hurls abuse at him. He warns them not to tell their mother. This is our secret, he tells them. She wouldn’t believe you anyway.

In setting up Mitchum as the tormentor of two young children—and having him hide behind his privilege as an adult, and his privilege as both their stepfather and as a man of God— The Night of the Hunter gives us the perhaps the first real portrait of a child molester in American cinema. Even more than Peter Lorre’s turn as the child killer in Fritz Lang’s M, Mitchum’s child-terrorizing preacher is a dark portrait of a very real monster.

The Night of the Hunter situates this monster inside a highly stylized landscape of shadows and Expressionistic sets. It is a completely artificial world where even nature feels unnatural, and where everything is shot to accentuate artificiality rather than obscure it. This movie simply looks unlike any other movie ever made, a combination of Flannery O’Connor and Dr. Caligari. The whole thing is so fake, so scary and eerily beautiful, it feels like a children’s movie directed by a pederast--OZ with an evil Wizard.

My essay on the film—like most writing about it—has revolved around Mitchum’s crazy preacher, but it is worth noting that the final third of the film involves the children seeking protection with an old lady played by Lillian Gish. Mitchum and Gish square off at the end, HATE and LOVE battling for the lives of two young kids. Years ago, when I first saw this film I didn’t quite understand the function of Gish. The scenes at her idyllic country home seemed to go on too long after the plot had resolved itself. I was wrong. Watching the film many times over the years, I began to see these scenes as the culmination of the film’s vision, their artifice an integral part of the artifice of the film as a whole. Gish’s final speech, in particular, seems like a fairly direct comment on the barely submerged theme of child abuse.

The Night of the Hunter was, famously, the only film directed by the great actor Charles Laughton before his death in 1962. What a shame. Who knows what else he might have done? In a way, though, this sad fact only serves to make Laughton’s film all the more special. I don’t know what compelled him to make this haunting children’s nightmare, but its uniqueness only adds to its mystery.

The Night of the Hunter gets the CC treatment 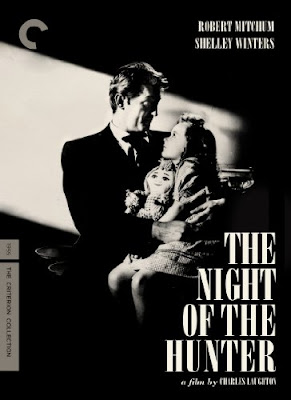 On November 16th, one of the greatest of all noirs, Charles Laughton's masterpiece The Night of the Hunter gets the Criterion Collection treatment. The package looks to be all that such an important film deserves: a newly restored digital transfer, a discussion with Laughton biographer Simon Callow, and most impressively--two and a half hours of outtakes and behind the scenes footage enticingly titled Charles Laughton Directs The Night of the Hunter.

Laughton's film unfolds like a child's nightmare, with Robert Mitchum playing a woman-murdering child-terrorizing preacher named Harry Powell. I'll post an essay on the film in a few days. For now, check out the movie's page at the Criterion Collection.

Eddie Muller of the Film Noir Foundation just hipped me to an article by David Kehr of the New York Times entitled "The Ballad of Blu-Ray and Scratchy Old Film." It's an incisive look at the odd relationship between movie studios and the priceless film libraries they're letting disintegrate on their shelves. Will Blu-Ray and DVD be the savior of classic films? Not necessarily, according to Kehr.