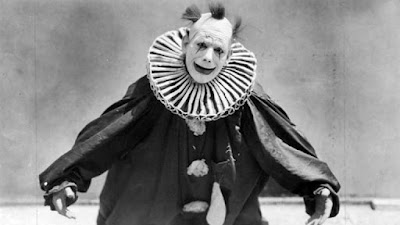 In the unrelenting hellscape that was 2020, we all had to seek our comfort where we could find it. One place I've been very happy lately is in the world of silent film. I've always liked the silents, but over the last year or so I've been watching more and more artifacts from the strange and mysterious world of the pre-sound era. Sadly, most movies from the silent era are lost (anywhere from 80% to 85% most estimates say), yet what remains is a rich treasure trove and much of it is available online. YouTube in particular is a good source of silent film, oftentimes with new kinds of musical accompaniment.

Here are some of my favorites:

1. 7TH HEAVEN (1927)- Director Frank Borzage's masterpiece is, simply put, one of the most beautiful movies ever made, a sweet and touching romance with Charles Farrell and Janet Gaynor. This one always makes me cry.

3. THE PASSION OF JOAN OF ARC (1928)- Movies don't get much more intense than this harrowing recreation of the trial and execution of Jeanne D'Arc. One of Dreyer's signature films and certainly one of the most fascinating films about religion ever made. (Is it a testament of faith? A condemnation of fanaticism? Both?) The central performance by Renee Falconetti is as unsettling as any ever put on film.

4. HE WHO GETS SLAPPED (1924)- How odd that one of the darkest Hollywood movies of the silent era (maybe THE darkest, come to think of it) was made at MGM. But then again it was directed by Victor Sjostrom during his brief time working in the US. The story of a heartbroken man (Lon Chaney) who takes a job as a circus clown whose masochistic gimmick is that he gets repeatedly and viscously slapped and heckled by the audience, it is as strange and disturbing as it sounds.

5. GREED (1924)-Fun fact, Frank Norris's 1899 MCTEAGE is the novel that I've read the most times. Erich von Stroheim famously tried to put all of the book on screen, resulting in a 10 hour epic called GREED. Chopped down to a more manageable running time by MGM (MGM again!), it's the story of money and murder, and, of course, greed. The climax in Death Valley is an unforgettable vision of hell on earth, a damnation sought and earned by simpleminded dentist turned killer McTeague (Gibson Gowland).

6. INTOLERANCE (1916)- DW Griffith's epic ain't for everyone, but I genuinely love this film. It's 3 1/2 hours long with four intercut storylines told across different time periods, all on the theme of "love's struggle throughout the ages." It is entirely possible that this 104-year old film might be the most artistically ambitious movie you've ever seen.

7. SUNRISE (1927)- A film as beautiful as 7TH HEAVEN and, in its way, as daring as GREED or INTOLERANCE, this is FW Murnau's grand tale of love and temptation. George O'Brien, Janet Gaynor (who ran back and forth between this and 7TH HEAVEN) and Margaret Livingston comprise the greatest love triangle in silent film.

8. THE CABINET OF DOCTOR CALIGARI (1920)- I mean, what can you say about Robert Wiene's horror classic? It didn't singlehandedly invent German Expressionism, but it is undeniably the consummate example of it. The sets--twisted, slanted, angular, unreal yet real--are as important as the story of insanity and murder itself.

9. STEAMBOAT BILL JR (1928)- There aren't a lot of comedies on this list, in part because I tend to think that comedy is over represented in considerations of silent film. (There are a lot of reasons for that, chief among them being the relative ease with which slapstick translates across cultures and time periods. A man falling on his ass is pretty much funny to everyone.) Here's my favorite silent comedy. There are other Buster Keaton films that get more attention, but this one makes me laugh the most and also contains his greatest death-defying gag, wherein he drops the front of house on himself.

10. IN CHIEN ANDALOU (1928)- To sort of borrow what I said above about CALIGARI, this film didn't invent Surrealism but remains its primary cinematic artifact. The work of filmmaker Luis Bunuel and artist Salvador Dali is a 21-minute drug trip of arresting imagery. Nearly a hundred years later, its impact has been somewhat dulled as Surrealism has been absorbed by more of the mainstream, but the film itself remains fascinating. As with CALIGARI, part of the appeal is the fact that it's both physically palpable and wholly unhinged from our waking world.

There are a lot of big classics and important figures I've left off this list (no PHANTOM OF THE OPERA or NOSFERATU? no Charlie Chaplin or Fritz Lang?), but the list isn't intended to be either definitive or objective. This is just what rocks my boat the most.

One film I'd like to mention is one I'm still watching. LES VAMPIRES (1915-1916) is a ten-episode French crime serial about a gang of outlaws led by a sexy femme fatale named Irma Vep (played by the actress Musidora). I'm on episode seven, and I'm having a blast. It's funny to see how this serial influenced, oh just about every crime movie you've ever seen. It's got it all: severed heads stashed in boxes, rooftop escapes by costumed figures, poisoned rings, poisoned pens, faked deaths, real deaths, evil hypnotists, chloroform, gun fights, swapped identities, and a sequence where thieves pump gas into a ritzy meeting of swells that reminded me of similar scenes in both Tim Burton's BATMAN and Christopher Nolan's TENET. Filmmaker Louis Feuillade made LES VAMPIRES as the central film in a trilogy of crime epics, between FANTOMAS (1913-1914) and JUDEX (1916). I haven't seen those yet, so I guess I know what I'll be doing as I'm heading into 2021.