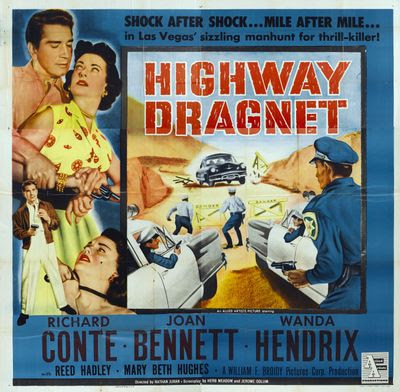 The main reason to see HIGHWAY DRAGNET is to get a glimpse of something you don’t see in a lot of classic Hollywood cinema, a great female movie star in her middle age. Many of the great male stars of the golden age were allowed to age onscreen. People like Bogart, Gable, Cooper, and Stewart did some of their best work in their forties and fifties. John Wayne didn’t really become John Wayne until he’d shed his youthful beauty and became an autocratic authority figure.

Actresses, however, had a tougher go of it. Even more than their male counterparts, they were valued for their youth and beauty. They were symbols, above all else, of vitality. Middle-aged actresses, on the other hand, were usually accorded no sexual identity. As they entered their forties and fifties, they were often turned into mothers or maids, even while their old costars like Bogart and Cooper were paired with younger and younger women. Bette Davis and Joan Crawford delayed this demotion longer than most, but even those two titans finally made some kind of peace with the grim reality that they’d lost their prized commodity—their youth—and became grotesqueries for hire in horror movies like WHAT EVER HAPPENED TO BABY JANE?

Joan Bennett had a tougher time than most. She’d been a huge star in the early forties—and was particularly adept at playing bad girls in films like SCARLETT STREET—but when an adulterous affair ended with her husband shooting her lover, Bennett’s career came crashing down. A sex scandal and middle age were a bad combination at the box office. Bennett’s days as a star were over. She didn’t find steady work again until the late sixties when she nabbed a supporting role on the hit show DARK SHADOWS. (Later, she would take her own BABY JANE-like turn toward the grotesque in 1977’s SUSPIRIRA).

In 1954, however, Bennett appeared in an interesting little sunbaked noir called HIGHWAY DRAGNET. The film stars Richard Conte as Jim Henry, a Korean war vet who gets into an argument with a blond barfly (played by Mary Beth Hughes) in a Vegas casino. The next morning, the girl turns up dead. Implicated in the murder, Henry escapes the cops and hitches a ride with two women, a pretty young model named Susan (Wanda Hendrix) and a surly photographer named Mrs. Cummings (Bennett).

Movie logic dictates that one of these three people is the killer. Since we know it’s not Conte, and since Wanda Hendrix exudes a purity as fresh as newly fallen snow, that pretty much leaves us to watch Bennett. The plot twists in the final act of the film are outlandish, but Bennett remains as fascinating a presence as ever. What’s most striking about her here is how she operates outside of the sexual arena she used to dominate. Writing for the journal NOIR CITY, the scholar Foster Hirsch pointed out that she “is cast here as a post-sexual character, a woman pushed to crime because she has been romantically ostracized.” What Bennett brings to the role is the cumulative weight of her screen persona—the danger she embodied in her Fritz Lang films, the world-weariness she exuded in HOLLOW TRIUMPH when she told Paul Henreid “It’s a bitter little world.” In HIGHWAY DRAGNET we get to see that persona further down the road, the post-sexual femme fatale, a little worse for wear but still pissed off and still defiant.