Some thoughts on the Longevity of THE WIZARD OF OZ (1939) 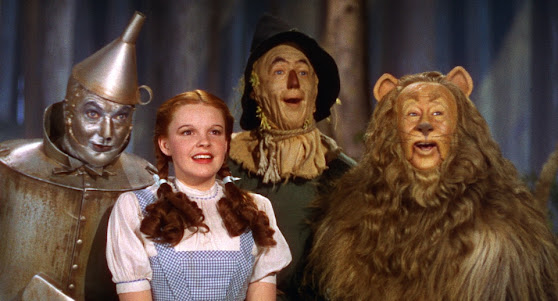 The other day in the film aesthetics class I teach, we watched THE WIZARD OF OZ. Everyone in class had seen it, but no one had seen it since they were children. The viewing made for a fascinating experience.

For one thing, the movie doesn't just hold up well, it possibly holds up better than any movie ever made. If that seems like an outsized claim, consider the following:

1. What other film from the 1930s would a room full of teenagers in 2022 already have seen? (I recently learned that in this same class, about a third of them had never seen the original STAR WARS.) They'd all seen OZ, and they'd all seen it around the same age, between 5-10 years old.

2. Because it's a kids movie, it doesn't really age. The reason that most movies from the 1930s or 40s have trouble connecting with modern audiences is they're time capsules of old attitudes and styles. (I've found some of my students to be resistant to the pre-Method style of movie acting, as well as black and white cinematography.) THE WIZARD OF OZ, though, was created to be a live action cartoon, a storybook come to life. It's artificial from start to finish, with a mythic context. The acting, music, dancing, art direction--it's all integrated and pitched at the same level of unreality. This separates it, even from most kids movies of its time, which tried to at least wink at the parents or teens in the audience. Not OZ. It knows who it's for: kids. The irony is that, because we were all kids--because we wanted to run away from home at some point, and then wanted to return, and because we were scared of adults, and loved our pets, and because we felt misunderstood--it's for all of us.

3. Look, I'm a Judy Garland obsessive, so of course I'm going to say it's all because of Judy, but it's impossible to imagine anyone else doing what she does in this film. She's a teenager playing a little girl (which, like everything else, adds to the movie's air of otherworldly weirdness). She's plucky without being annoying, scared of evil witches and flying monkeys but always able to rise up and defend herself and her friends. And, of course, she's the greatest musical comedy performer in movie history. That helps, too.

MGM originally wanted Shirley Temple as Dorothy, but Temple, though talented and adorable, was an actual child and would have grounded the movie in a reality at odds with its aesthetic. And while she could sing, she sang, well, like a kid. She would have been, in a word, cute. Judy isn't cute in OZ, she's touching, and that's the difference.

4. That brings us to "Somewhere Over the Rainbow." Famously, the scene of Judy singing her signature song was almost cut for fear that the Kansas opening was too long. But it is, of course, the heart of the movie. The song, melodic and simple, and imbues the movie with a strange sense of melancholy. The more you know of Judy's life, of course, the more meaning the song has.

5. The level of craftsmanship here is exemplary across the board. The makeup and costumes of the Wicked Witch, the Scarecrow, the Tin Man, and the Cowardly Lion are still impeccable. The Technicolor still pops. The sets by Cedric Gibbons still enchant. It's all great.

I'm tempted to say that THE WIZARD OF OZ is a perfect movie, but I can't because I hate the Lion's song "If I Were King of the Forest." It slows us down right when we want to get to the Wizard himself, and the song itself is a dud, a three-minute slog through Bert Lahr's mugging.

That one quibble aside, though, OZ really is pretty close to a perfect creation. It shows the studio system operating at its zenith, all the parts working in concert to create a masterpiece, one of the true works of cinematic art.