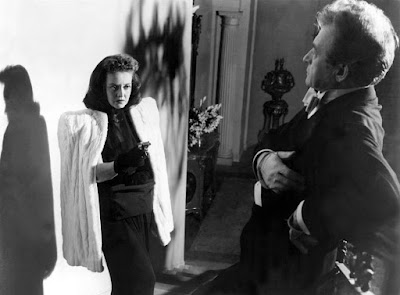 A woman walks out of the rain and into a university concert hall where a cellist is just finishing a performance. The students swarm around him to proclaim his greatness, but then he and the woman lock eyes. They are long lost lovers, separated by the war, each assuming the other was dead. The cellist is Karel Novak (Paul Henreid) and the woman is a pianist named Christine Radcliffe (Bette Davis). They embrace and go back to her place to plan their wedding and start their lives over again. Everything’s going great until Karel notices that Christine has a nice place. A curiously nice place. Where, he wonders, does she get the money to afford such a swank apartment with such an impressive view of the New York skyline?

Christine tells Karel that she gives piano lessons to rich pupils who reward her lavishly. Karel doesn’t believe that, but he tries to make himself believe it, at least until a massively successful and world-famous composer named Alexander Hollenius (Claude Rains) busts into their wedding reception in a jealous fury.

DECEPTION is a noir melodrama as opposed to a noir crime film. There are no gangsters or bank heists, no femme fatales or hardboiled detectives. This is a love triangle, with two men in love with same woman. One man is good (though capable of jealous rages) while the other man is a possessive, egotistical psychopath. The woman, it must be said, is a liar, albeit a bad one. She tries her best to juggle these two guys, along with the several different stories about her true relationship to each one of them, until everything comes crashing down.

While DECEPTION is no masterpiece, it is a perfectly good star vehicle for Bette Davis. This is the kind of film that demonstrates why Warner Brothers might have made, on average, more good movies than any other studio during the Golden Age of Hollywood. MGM was the biggest studio, and Paramount was the most “classy,” but the average run of the mill production from Warner’s was usually tighter and more fun than those of its competitors. Highly capable, if not particularly inspired, direction from Irving Rapper, economical scripting from John Collier and Joseph Than (adapting a play by Louis Verneuil), and gorgeous cinematography from Ernest Haller, all make for a film that knows what it’s doing. What kicks things up a notch, making this a superior example of the Warner Brothers output, are the music of Erich Wolfgang Korngold and the performances of Bette Davis and Claude Rains.

Along with Max Steiner, Korngold defined the sound of Warner Brothers in the 30s and 40s. (For a few years in the mid-40s, they were joined by the great Franz Waxman.) Steiner was the studio work horse, often forced to compose an entire score in only a few weeks, eventually tallying about 185 scores over the course of thirty years at the studio. Korngold, on the other hand, was treated like a prize horse, given months to work out his elaborate compositions, usually at the rate of about two movies a year. (A former child prodigy who had matured into one of the most respected composers in Europe until the rise of the Nazis forced him to flee to America, he ended up being the “prestige” composer at Warner’s.) For DECEPTION, Korngold composed a cello concerto for the film’s climax, wherein Hollenius tortures Christine and Karel with the promise of a masterful new concerto to showcase Karel’s skill and launch his career in America. Korngold’s composition is such a moody triumph that he expanded it into a full-length work, his Op. 37, the Cello Concerto in C.

To be honest, Paul Henreid almost always leaves me a bit cold, and his performance here is merely serviceable when another performer could have made Karel a truly haunted figure. He’s outmatched by Bette Davis, who holds the screen as well as any actor ever could. Whether she’s lying, making love, or just thinking, you can’t really take your eyes off of her. Having said that, however, the film is stolen right out from under its headliner by Claude Rains as the mad composer Hollenius. At his best, as he is here, there was really no better actor in the 1940s than Claude Rains. Whether he was the lovable crooked policeman in CASABLANCA or the murderous husband in NOTORIOUS (to name just two of his many, many supporting roles), he was always smoothly urbane, undeniably corrupted, and unmistakably human. Here he makes a Hollenius a tiny tower of insecurity, brilliance, and nonchalant cruelty. He’s the best thing about the movie.