Commentary Track for WOMAN IN THE DARK 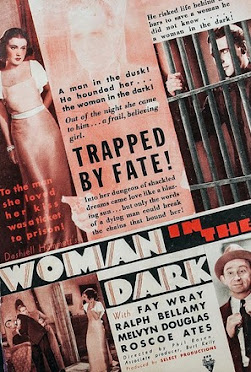 Well, here's some fun news. I had the opportunity a few months ago to record my first commentary track, for Flicker Alley's Blu-Ray release of the Dashiell Hammett adaptation WOMAN IN THE DARK. The film is included in a box set called IN THE SHADOW OF HOLLYWOOD: HIGHLIGHTS FROM POVERTY ROW.

It was interesting to try something new, to work in a entirely new medium. I've been teaching film studies for a couple of years now, and I've been writing about film for much longer, but recording audio commentary is a whole other animal. Trying to juggle historical context and shot-by-shot analysis while also trying not to jumble my words or repeat myself was a fun challenge. I can tell you one thing: it certainly gave me an even greater appreciation for guys like Eddie Muller and Alan K. Rode who make this shit look effortless. It is tricky, damn tricky.

Go check out the box set and support Flicker Alley, which is doing excellent work cleaning up and releasing works that fall through the Criterion cracks.