Talking During The Movie 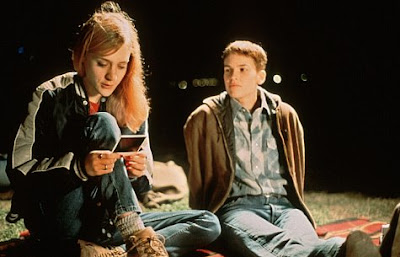 Unless you live in a big city with access to a good repertory theater, or you are independently wealthy, you probably experience most older films (and many newer films) for the first time on DVD. This presents all manner of problems, of course. For most of cinema history, movies were specifically created to be projected on a huge screen in the dark. To watch them on the small screen, or on a computer, is a fundamentally misleading way to experience the intentions of the filmmakers.

But this isn't a lamentation about the loss of the romantic culture of arthouse theaters. You gotta work with what you got, and I've seen more great movies on DVD than on big screens. The quality of DVDs vary, of course, but for the hardcore movie geeks the DVD offers one exceptional benefit: the commentary track.

Now, I'm guessing most hardcore movie geeks already like commentaries, but I know that many people (especially casual movie fans) are less inclined to sit and listen to people talking about a movie.

In the right hands, however, the commentary isn't simply an addendum to a DVD package, it provides an entirely separate experience involving the film. I once heard Christopher Hitchens say that you never read the same book twice because you are always different when you come back to the text. This is doubly true of the DVD commentary. The commentary track makes you not only watch the film again, it gives you a guide who directs your eye or distracts your attention at any given moment. The film ceases to affect you as a story and becomes instead an object of study. It's the difference between reading a book on your couch and studying the book in class with a teacher. If the home viewing experience robs us of the communal enjoyment of watching a film with other people, the commentary, if done well, can give us an experience quite unlike any we're likely to have at a theater.

Of course, as with the picture itself, quality varies. There are certain things of which to be leery when it comes to commentaries:

1. Actors. I love actors as much as the next geek. I fall in love, hard, with actors and actresses. I see them in my dreams at night. But they rarely add much to a discussion of a film's qualities. There are exceptions to this: Willem Defoe adds interesting insights to The Last Temptation Of Christ, and Brad Pitt is straight up funny on Ocean's Eleven. Most actors, however, just don't have much to say.

2. A crowd of commentators. When you see that a commentary track has twelve people listed, it usually means that you're going to have to endure some banal anecdotes from the technical folks on the crew. I've never heard a sound editor add anything to a discussion of a film. I'm not saying these people aren't important; I'm saying they're dull. Moreover, they are usually telling you something you don't care about. On the commentary for Castaway, for instance, a sound guy talks over the reconciliation scene between Tom Hanks and Helen Hunt. It's a fine scene, delicately written, directed and acted--and the commentary track is literally a monologue about the level of hum coming from the refrigerator. Another example of overkill is LA Confidential. There's no good reason they shouldn't have simply let Ellroy and Hanson do the whole thing.

3. The brilliant but clueless academic. I love Peter Cowie's writing on the Swedish director Ingmar Bergman, but his commentaries for the director's films usually involve him describing what's happening onscreen.

Having sent up those white flags, here are a few of my favorite commentaries:

Crime Wave: James Ellroy and Eddie Muller watch the great De Toth noir together. Muller knows more about noir than anyone alive and Ellroy is Ellroy--profane, funny and brilliant. After listening to them talk about this movie, you'll want to go out drinking with these guys.

Eddie Muller is, in fact, the best man around talking about noir. If you see his name on a commentary track, it'll be worth a listen. Even when he's watching a stinker like The Racket, he's a wealth of information. He's also, importantly, an affable and lively guide. His commentary on Wise's Born To Kill is splendid--and his story about almost being decked by an elderly-but-still-crazy Lawrence Tierney is priceless. See also: Somewhere In The Night and Where The Sidewalk Ends.

Citizen Kane: Roger Ebert is another tour guide who is a winning combination of affability and knowledge. Citizen Kane is the rare movie which has something interesting to note every ten seconds and Ebert does a fine job of catching most of it. The DVD also has a commentary by Peter Bogdanovich which is less professorial and energetic but which has the added virtue of Bogdanovich's friendship with Welles. Ebert watches the film like an obsessed fan, and Bogdanovich watches it like a friend. See also: Ebert's track on Casablanca and Bogdanovich's track on The Lady From Shanghai.

The Last Temptation of Christ: Scorsese, Schrader, Defoe, and Jay Cocks all weigh in on their controversial adaptation of the Kazantzakis novel. The result is a fascinating discussion of the themes of the film rather than the usual here's-where-we-put-the-camera.

Boys Don't Cry: This is the single best commentary I've ever heard from a filmmaker. Director Kimberly Peirce sits down and tells you how to make a movie. She's as serious as her film, but her observations are never less than fascinating.

Blue/White/Red: Kieslowski's colors trilogy is dissected with palpable glee by the academic Annette Insdorf. Not for everyone's taste, but if you like the movies to begin with, you'll probably want to hear what Insdorf has to say.

Notorious: Marian Keene's assessment of Hitchcock's romantic masterpiece is academic. Really academic. As Oscar Wilde said, it's the kind of thing you like if you like that kind of thing. I like it, though I must say that I've always longed for the brilliant scholar Robin Wood to do a Hitchcock commentary track. As I mentioned above, Vertigo has never gotten the treatment it deserves. (To digress further: Most Hitchcock films still haven't gotten the five star treatment they deserve. The bulk of his American films appear to still be the property of Universal or the Hitchcock family or some similar controlling authority. Very nice versions of these films have been released, but these films deserve a package along the lines of the Criterion treatment. Whoever controls the Hitchcock films staring with Rope needs to realize what they've got. Go big, people. Movie geeks like me will shell out fat cash for a great package of Rear Window or Marnie or The Birds or Psycho or Vertigo. Bring on the academics and the obsessives. Pat Hitchcock seems like a very nice lady, but I don't think she has a lot to add to a discussion of her father's films.)

Some more movies in need of a good commentary track:

1. Chimes At Midnight-like many of Welles' films this is still waiting for a proper DVD release

4. Too Late For Tears/Pitfall-both of these Lizabeth Scott masterpieces need a proper DVD release and someone knowledgeable to talk about them. Bring on Muller!

5. Detour-since this movie is in the public domain it's difficult to get a company to pony up the cash to pay for a decent treatment, but it's an irreplaceable work of art that needs to be honored. Bring on Muller!

6. The Big Sleep-this one baffles me. Everyone loves this movie. Everyone. C'mon, Warner Brothers, do it right. Bring in some Hawks experts and Bogie experts and Chandler experts.

7. High Noon-westerns often get shafted when it comes to commentaries. Right now, High Noon has a boring track featuring the aging children of the stars and crew members. Bring on the movie geeks!

8. The Man Who Shot Liberty Valance-an overlooked film in many ways, this deserves the full treatment as well.

Finally, here are some fun sites that deal with commentaries. I don't agree with everything on them, of course, but they're helpful guides:


Let me know if I've missed a particularly informative or entertaining commentary.
at 11:20 AM

Great article. Agree with most of your choices. Funny story -- I met Eddie Muller at the LA book expo last year. I was talking with the author Christa Faust, and she mentioned that Eddie was there, too. I then heard is voice, unmistakable after seeing so many of his commentaries. When I introduced myself, I said 'It's a pleasure to meet the man who've I heard talking in my apartment all these years.' He laughed and said that was the 'most original' complimet he's ever had ...

I hope you meant 'lamentations" as lamination is actually something I'd like to do to people who talk during not movies (not commentators).

Do you know where one can find "The company She Keeps"?

Ha! It's like Wilde said, a writer can overcome any problem except a typo.

If you send me your email address, I can give you some info on The Company She Keeps.

That's a great story, Carole. I had a similar meeting with Muller about six months ago when I attended the Noir City in DC. It's always funny to meet someone with whom you've already spent a lot of time.