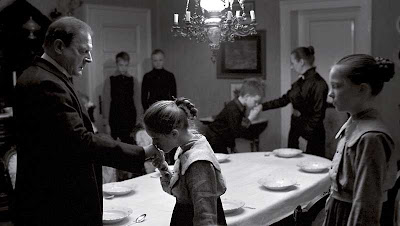 Some thoughts on current releases:

1. Shutter Island-Martin Scorsese has spent the better part of the last fifteen years in a lull. The Departed was a crackerjack entertainment and No Direction Home was a terrific documentary, but otherwise you have to go back to Casino to find a truly great Scorsese film. Shutter Island is an enjoyable potboiler starring, once again, Leonardo DiCaprio (it's starting to feel like the director is afraid to make a movie without Leo). It's a taut thriller with a trick ending, but every bit of it feels superfluous. Part of the problem is that Scorsese is always going full throttle. This quality gives his best work the feel of real urgency, but it makes his lesser films annoyingly insistent about nothing. The worst thing about Scorsese these days is the way the marketing boys have decided to use his past glory as a selling point for sub-par new movies. I'm happy that this great American artist--who made some of the finest films of the 20th century--is finally enjoying fame and fortune, but we shouldn't act as if he's making the kinds of films that made him such a legend in the first place. Watching a film like Shutter Island is like listening to one of those duet albums by an aging icon like BB King or George Jones where the old genius noodles away with some overawed younger artist. The old guy gets to make a buck, and the young guy gets to say he played with a master, but no one much cares about the result.

2. The White Ribbon-It's probably not good for my feelings about Shutter Island that I saw it on the same day I saw Michael Haneke's chilling and brilliant new film, The White Ribbon. It's about a series of odd occurrences in a small village in Germany in the years leading up to WWI, and it is as quiet and disturbing as Bergman's The Silence. Haneke's camera moves only when it needs to, seeming to pin us to images that unfold pitilessly in front of the camera. The director, working with cinematographer Christian Berger, shoots in a pristine black and white that reflects the sterile surface of this society. Underneath that veneer is an interwoven community choking on secrets and lies, all given shelter and power by the sanctions of class and religion. This is the kind of film that rarely raises its voice but still had my hands sweating--and people gasping throughout the theater. The theme of the film, ultimately, is the way in which children are always at the mercy of adults, regardless of the quality of those adults. After all, no matter how cruel, stupid, or untrustworthy they may be, everyone becomes an adult by virtue of living past the age of 18 or so. That disjunction has been the cause of untold misery since the world began, and it will never go away, yet we so rarely see it acknowledged in art. Haneke's film, brutal in emotion but never explicit in effect, is a masterpiece. If you can see it, you should.

3. Crazy Heart-Jeff Bridges has been underrated for so long it's somewhat surprising that he finally won an Oscar. The prize is beyond meaningless, but, hey, I'm happy for him. His performance as washed-up country singer Bad Blake is indeed the best reason to see Crazy Heart. The film's as a predictable as a one-night stand, but Bridges plays the role with a bone-weary charm. Craggy and whiskey-voiced, he strides through the film even as the plot puts him through the motions.

4. The Book of Eli-It's odd that Denzel Washington has waited until this point in his career to start making pure action films. This film is no one's idea of a work of art, and its last minute attempts at psuedo-religious profundity border on insulting. Still, it's fun while it lasts. Mila Kunis is pretty bad as his girlfriend--playing a woman raised after a nuclear devastation, she looks like she'd rather be shopping--but Gary Oldman chews on the scenery, which is always fun, and Denzel kills more people than cancer.

5. The Ghost Writer-In this thriller (and likely last film) from Roman Polanski, Ewan McGregor plays a British ghost writer hired to pen the memoirs of a controversial former Prime Minister (Pierce Brosnan) after the previous writer died in a mysterious ferry accident. He takes the job just as the PM is being indicted by the ICC for war crimes in his role as an enabler of American torture policy. The script by Robert Harris snakes through all manner of personal and international intrigue, and Polanski remains a potent filmmaker (I particularly love the shot that follows a folded note through a crowd until it arrives at its intended victim). Somehow, though, things here are a little dry. McGregor doesn't seem to have recovered from his incarceration in George Lucas's green screens--the wild charisma that he exuded in Trainspotting or Moulin Rouge seems, with each new role as a Hollywood leading man, more and more like a distant memory. And Pierce Brosnan is a handsome, bland engima. That quality should work for this role, but somehow it doesn't. The best performances in the film belong to Olivia Williams as Brosnan's wife and Kim Catrall as his assisstant/mistress. Neither is exactly what she seems, and the actresses, knowing that they represent the center of the drama, take their roles and run. A good film, though you can be forgiven if you don't feel like taking Roman Polanski's advice for what consitiutes good international law.

(Something curious: The Ghost Writer was clearly rated R before someone decided it needed to be a PG-13. Several variations on the expletive starting with the letter F--used alternatively as a noun, verb, and adjective--have been unconvincingly cleaned up and substituted variously with shit, screw, and freaking. Maybe once Polanski went to the slammer the studio panicked and decided to turn this decidedly middle-aged thriller into something more sixteen-year olds could get in to see--just in case Avatar was sold out, I guess.)

Lastly, I just saw the Red Riding trilogy. It's top-notch work, but I need to mull it over before I write about it. More on it sometime soon.
at 12:00 PM