The Making of THE NIGHT OF THE HUNTER 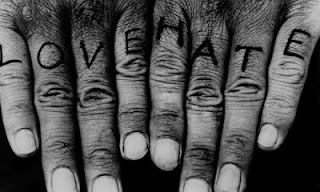 Check out my new essay on the making of THE NIGHT OF THE HUNTER. It's excerpted here from the new issue of NOIR CITY. For more info on the journal click here.
at 11:54 AM No comments: 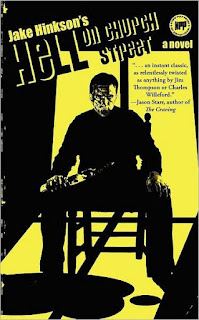 Here's some great news. The Poisoned Pen bookstore in Scottsdale, AZ has selected HELL ON CHURCH STREET as its Hardboiled Discussion Group pick for August. For those who may not know, The Poisoned Pen is huge deal in mystery geek circles. It's one of the few remaining bookstores (I could stop the sentence right there, sadly) that specialize in crime fiction. It's more than a bookstore, though. It's a near legendary hub for the crime fiction community, which has real power in the Southwest. I'm thrilled that they would pick my little book to discuss. Here's hoping it goes well.

To find out more details about the discussion group, and this great store, click here.
at 11:49 AM 1 comment: 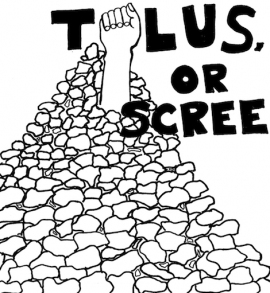 1. You can listen to my new interview with Patrick Culliton and Jay Varner over at Talus, Or Scree. We discuss Hell On Church Street, the definition of noir, and more. It was a fun talk. I love those guys.

2. One feature of the new issue of NOIR CITY that I wanted to point out is the long interview with Film Noir Foundation president Eddie Muller.  It's a fascinating nuts-and-bolts look inside the process of rescuing and restoring America's noir heritage. Muller has long been a hero of mine--and I suspect he's a hero to many of the regular readers of this blog--and this is probably the best interview I've ever read with him. He's fighting the good fight, racing against time to rescue as many classic noir films as he can. The interview captures Muller's frustrating relationship with the corporate entities that own these films and don't realize, or don't care, what they have deteriorating in their vaults. You can get the new issue with the Muller interview (and about a hundred pages of new writing on Gloria Grahame, John Garfield, and much more) when you head over to the Film Noir Foundation.
at 12:11 PM No comments: 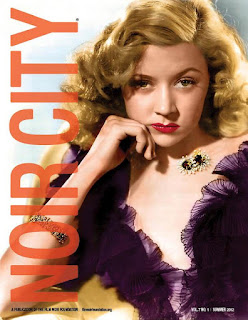 The new issue of NOIR CITY arrives today. It features great articles by Eddie Muller, Vince Keenan, Mark Fertig, Carl Steward, Anne Hockens, and many others. I have two pieces in this issue: one is a look back at the making of THE NIGHT OF THE HUNTER, with a special emphasis on the author of the original novel, Davis Grubb. I also have a shorter piece on the film THE BREAKING POINT, starring John Garfield.

This new issue is a big deal. It has a lot of interactive features: trailers, film clips, slideshows of posters and stills, and even some 3-D photos. The Film Noir Foundation is now working in affiliation with TCM and Warner Brothers, so you'll be able to purchase copies of the films written about right from the magazine itself. This month also marks NOIR CITY's debut on iTunes as a iPad app. We're hitting the big time, people. And we're bringing the best of classic noir with us. 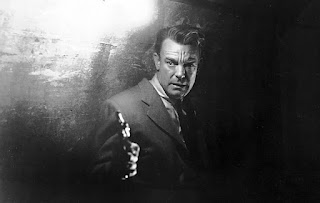 There was something insubstantial about Dennis O’Keefe. He starred in a slew of film noirs—more than almost any other leading man, in fact—but the impression he made didn’t go very deep. That probably sounds like a tougher criticism than I mean it to be. O’Keefe was rarely ever bad in a film, and in films like RAW DEAL and ABANDONED he stepped up and delivered strong performances, but most of the time he was more of a sturdy workhorse than a star player.

Look at a film like CHICAGO SYNDICATE. Here O’Keefe plays an accountant named Barry Amsterdam who is recruited by the cops to infiltrate the criminal empire which has sprung up in the wake of Al Capone’s arrest and conviction. This new syndicate is run by a powerful behind the scenes player named Arnie Valent (played smoothly by Paul Stewart). Since the gangster recently let his accountant go, at the end of a gun no less, Amsterdam works his way into the organization, impresses Valent, and starts to gain his trust. He also meets two women hovering around Valent. One is a singer named Connie Peters (Abbe Lane), the kind of washed-up showgirl who’s a couple of days past her expiration date and doesn’t know it yet. The other woman is a mysterious gambler named Sue Morton (Allison Hayes) who may not be what she seems. Neither woman likes Amsterdam very much, but Valent takes an immediate shine to him. Soon the soft-spoken gangster is entrusting Amsterdam with his private books, offering him a cut of the proceeds, and even taking him to the old neighborhood to meet his devoted mother.

Most of this is pretty standard fare, albeit done well. Director Fred F. Sears was a journeyman director and bit-part actor who churned out a lot of low budget westerns and the occasional crime flick (he directed O’Keefe in INSIDE DETROIT). Alas, he’s also the man who gave us the camp classic TEEN-AGE CRIME WAVE, so he could go bad when he had weak material. Here, though, he moves scenes at a brisk pace, and he ends the film with a chase that’s actually quite well done. O’Keefe and Stewart have a shootout that extends through a factory, down into some tunnels beneath the city, and ends in the old neighborhood right under Mama Valent’s window—it’s a beautifully shot sequence with some nice twists and turns.

Still the script feels like a rush job. As Valent, Paul Stewart probably gives the film’s best performance, but his character isn’t allowed any real breakthrough moment. Stewart started out on the stage with Orson Welles in New York and moved to Hollywood for CITIZEN KANE. His aura as an actor was an almost lethargic sleaziness, as if he couldn’t be bothered by the pretense of decency. CHICAGO SYNDICATE seems to set up his character for an emotional showdown with Amsterdam—after all, in their relationship, Valent is the honest one—but the film never does anything with this. Likewise, as his washed up girlfriend, Abbe Lane works hard, but her part is so underwritten that a later scene in which she’s tortured lacks the power that it should have.

At the center of it all is Dennis O’Keefe, sturdy and bland. He had a classic fifties face, suspicious of emotion but weakened by booze and cigarettes. He’d started out in films as an extra in the early thirties, and he’d stayed in the business for the better part of forever without ever really becoming a star. CHICAGO SYNDICATE was well over the two hundredth movie of his career, and like a lot of people on the B-list in the fifties his days in features were numbered. The studio system was starting to break up, and with it died the classic B-movie. O’Keefe found himself on television where he had a short lived comedy series costarring Hope Emerson. His legacy in film comes down to the glut of crime flicks he made in the forties and fifties, and yet even in noir he never achieved the following of someone like Robert Mitchum or Sterling Hayden. In truth, he lacked Mitchum’s style or Hayden’s glorious artlessness. What O’Keefe had was a professional’s consistency. It wasn’t a sexy quality, but it got the job done.