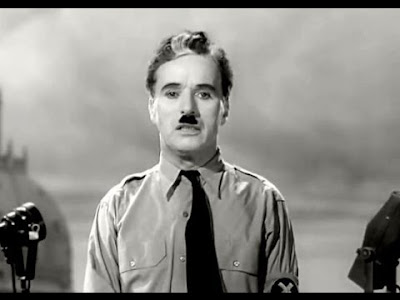 Charlie Chaplin's THE GREAT DICTATOR is an amazing piece of art made all the more amazing by the fact that it doesn't really work. Of all of Chaplin's major films, it is the most disjointed, the one that least holds together as a unified production. Tellingly, after this film, he would struggle to find his footing in a world and an industry that kept changing.

And yet, paradoxically, few people would argue against the supposition that THE GREAT DICTATOR is one of Chaplin's most important works.

The film, of course, was Chaplin's courageous stand against Hitler and Nazism. Context is everything in appreciating the film today, so it is important to begin any discussion of THE GREAT DICTATOR by pointing out that when Chaplin wrote, directed, produced, and financed the film, Hitler was at his zenith. America was officially neutral in the matter of the "war in Europe" and many Americans (more than we like to remember) supported Hitler's racist vision of the world, or, at the very least, thought that the Nazis should be of minimal concern to the US. When Chaplin released his film, then, he wasn't satirizing the biggest ghoul in our history books, the monster who has come to personify evil in the modern world. He was satirizing the Chancellor of Germany, a seemingly ridiculous little man, albeit a man whose ambitions were growing by the day and whose murderous rampage against the people of Europe had only just begun.

All of this makes THE GREAT DICTATOR a source of immense fascination today. Even more than most films, it is an historical document. It was never, ever, just a movie. This was the most famous movie star alive making a desperate plea to stop a rapidly unfolding tragedy.

Yet it is also, of course, just a movie. And as a movie, it is flawed. By this point, Chaplin had been directing movies for three decades and had done the bulk of his work in the teens and '20s. In the '30s, he had directed only two films: CITY LIGHTS (1931) and MODERN TIMES (1936). Now, those films are arguably his best works as a director, but by 1940 he was a long way from the time when he had dominated American film (or, really, world film). At his peak, he might well have been the biggest star that the movies ever produced, and he was as respected a director as any filmmaker alive, but he was also, in 1940, a middle-aged man who had become a star when movies themselves were just being formed, a director from a different era.

THE GREAT DICTATOR shows signs of his age. It is a curious mix of tones and styles, a fractured artistic statement. The comedy that we remember the film for is the broad satire of Hitler, with Chaplin playing "Adenoid Hynkel" as a preening buffoon spewing hate while he pours water down his pants. Much of the humor is big and simple, with the little dictator doing pratfalls or bumping his head. This tepid take on Hitler is, if you will forgive the comparison, somewhat akin to making fun of Donald Trump's hair. It has no bite, and it's not satirizing anything of consequence. At other times, however, the film's humor is darkly pointed, as in the scene where Nazi-like stormtroopers attempt to lynch a Jewish barber also played by Chaplin. Doing a lynching scene as slapstick is, to put it mildly, a tricky business. Yes, it's making fun of the hateful idiots with the rope, but the underlying reality of the scene is disturbing. Atrocities like this, as Chaplin well knew, were actually happening in countries across Europe and they had their analogue in the rampant racial violence in America.

All of this points to an uneasy balance of concerns for the filmmaker to juggle throughout THE GREAT DICTATOR. Chaplin, in his heart, was a vaudeville performer hustling for laughs (and, in a larger sense, for love). There's a scene where the little barber, in the midst of an anti-Semitic attack, gets bopped on the head and does a little wobbly shuffle up and down the sidewalk. This is the kind of gag that we've seen in Chaplin shorts, the enjoyment of which is based on our delight in the performer's fleet-footed dexterity. But that delight is impossible to reconcile with the actual setting of the action. It's as if Chaplin is stopping his dark satire of Nazism to say, "Aren't I still the cutest thing you ever saw?"

The most famous comic bit in the film is dictator's ballet with a bouncing inflated globe of the world. If some of the movie's slapstick is flatfooted (the sluggish opening scenes set in WWI seem to drag on), this scene showed that the old master was still able to create indelible images. There's something sweetly ridiculous in the mad little monster playing with the world, only to have it pop in his face when he gets too excited.

By the end, however, "sweetly ridiculous" isn't a tone Chaplin could bring himself to conclude with. Of course, the filmmaker didn't know the extent of Hitler's madness, nor could he have even conceived of the horrifying complicity of Hitler's people. But enough had transpired already that Chaplin chose to end his film by abandoning comedy altogether and giving the Jewish barber a lengthy speech of striking prescience and power.

He tells the Nuremberg-like rally:

"I don't want to rule or conquer anyone. I should like to help everyone if possible; Jew, Gentile, black man, white. We all want to help one another. Human beings are like that. We want to live by each other's happiness, not by each other's misery. We don't want to hate and despise one another. In this world there is room for everyone, and the good earth is rich and can provide for everyone. The way of life can be free and beautiful, but we have lost the way. Greed has poisoned men's souls, has barricaded the world with hate, has goose-stepped us into misery and bloodshed."

This passionate speech, deadly serious and delivered with blistering intensity by the actor, has no organic reason to be in the same movie with goofy pratfalls and old "he doesn't realize he's hanging upside down" gags, but it is, of course, the most important part of the film. This isn't Chaplin making fun of Hitler's mustache or overblown rhetorical style. This is Chaplin calling out Hilter for being a violent hatemonger. This is Chaplin begging the world not to tear itself apart.

THE GREAT DICTATOR, then, is the kind of movie that never really coheres into a unified whole. It's a collection of disparate elements: sight gags, social comedy, drama, and political commentary. It's also a statement by an aging star-director who still had some spring in his step and saw that he had a responsibility to speak out against the rapidly growing influence of an ideology that was marching the world toward disaster. It's not a perfect movie, but it is, in all the ways that really matter, a great film.
at 12:25 PM No comments: 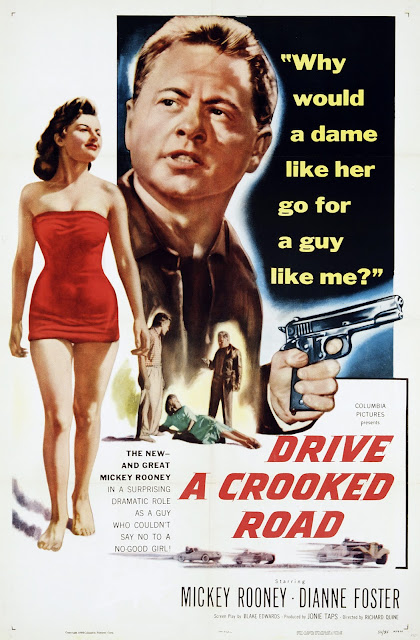 Noir City Chicago returns to the Music Box Theatre August 25th to August 31st. Eddie Muller and Alan K. Rode will be on hand to introduce an eclectic group of films that will center around this year's theme of "The Big Knockover." I love caper films so I'm especially excited by this year's selections which include classics like THE ASPHALT JUNGLE and KANSAS CITY CONFIDENTIAL, as well as lesser known (but equally excellent) heist flicks like PLUNDER ROAD and DRIVE A CROOKED ROAD. The latter film, in my opinion, is one of the great underrated noirs. Maybe I'll run a piece on it before it shows. 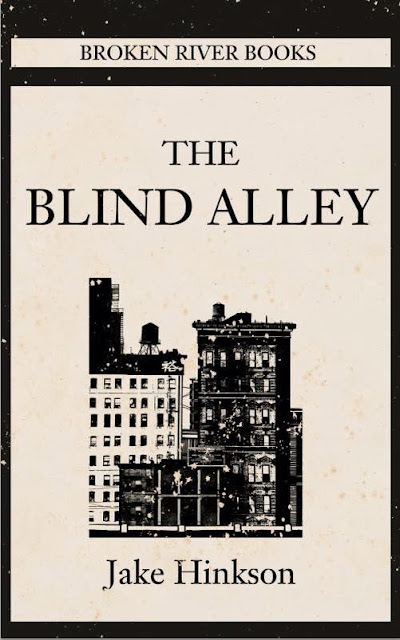 I'll be at the Bryant Park Reading Room on Monday July 17th at 12:30 to discuss my book THE BLIND ALLEY. Author Scott Adlerberg, the host of the Reel Talks program , and I are going to talk all things noir, so if you can make it, I hope you'll come by and say hello.
at 11:00 PM No comments: