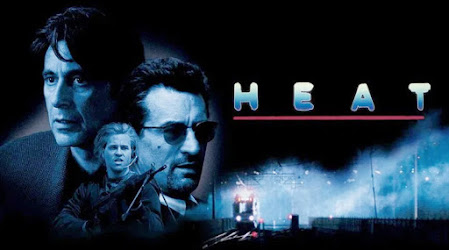 I managed to piece together a few visits to drive-ins last year. I saw JAWS and A NIGHTMARE BEFORE CHRISTMAS. It was fun, but drive-ins are more about the experience of going to a drive-in than the experience of seeing a movie (if you follow my meaning).

Music Box Theater opened up with reduced capacity earlier this year, and I saw a handful of films (NIGHT OF KINGS from the Ivory Coast, and Almodovar's new short film THE HUMAN VOICE along with his classic WOMAN ON THE VERGE OF A NERVOUS BREAKDOWN). All of this was good for me, a nice gentle return to the warm refuge of the movie theater.

This week (ironically, the week that the CDC dropped their big announcement that vaccinated folks could go maskless in public) I returned to the Music Box for their series on heist films. I saw HEAT, OCEAN'S 11, and RIFIFI.

These were movies to soothe the soul, at least if your soul is as weird as mine. HEAT (1995) has achieved the level of beloved classic for a lot of people, a status it deserves. It's such a precise movie, so careful in its construction and deft in its execution that it is easy to overlook that it's a flawed film. Its handling of the love interests of the two leading characters is unconvincing and burdened with cliche in a way that the rest of the film is not. For most of its running time, though, HEAT is able to transcend the cops and robbers conceit by leaning into it, by seeming to gather the entire crime genre into its loving embrace. It's the modern crime film by which all others are measured, for good reason.

OCEAN'S 11 (2001) is a lark, a fluffy confection of handsome men (and one pretty woman) running around Vegas in nice clothes, exchanging witty banter, while the director sets up an amusingly convoluted switcharoo. Funny enough, the Vegas pastime that the movie reminds you of isn't gambling, it's magic. Watching the film is like watching a slight of hand trick. It takes you in, diverts your attention, and you forget about it as soon as it's over.

RIFIFI (1955) is about as far away from OCEAN'S as you can get, considering the surface similarity of their plots: an ex-con puts together a crew for one last big job. But OCEAN'S does what most big budget heist movies do these days: it sets up an impossible fortress to penetrate and then unveils vaguely explained technologies that make it possible to penetrate. (This is the plot of every MISSION IMPOSSIBLE movie so far.) RIFIFI on the other hand gives us hard work in place of gadgets. This gang of crooks has to do hard manual labor to break into a jewelry store, bypass the alarm, and break into a safe. (All done in a long masterful sequence with no dialog.) No one in OCEAN'S ever breaks a sweat. In RIFIFI they sweat their asses off.

RIFIFI is preeminent among heist films, for good reason. It does everything a heist film is supposed to do and does it better than most, but it also dramatizes the underlying ethos of the whole genre. Heist films are working class films. They're rarely about passion (the way, say, the femme fatale plot is always about passion). They're about people trying to earn a living, any way possible.

It was such a joy to be back in the theater, watching these films. Here's hoping we can all get safely back to going to the movies soon.