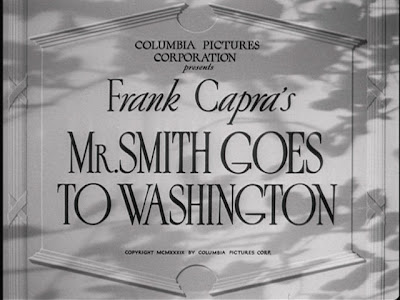 What we tend to remember about the films of Frank Capra is the sentimentality of their belief in distinctly American values, what Orson Welles once called Capra's "sweet Saturday Evening Post" quality. What we often forget, however, is that at the center of most of his major work (Mr. Deeds Goes to Town, It's a Wonderful Life, Meet John Doe) there is an ineradicable tension between those values and the darker forces of American society. In fact, that tension is the very subject of most of his best films.

This is certainly true of Capra's signature film, Mr. Smith Goes to Washington. Starring Jimmy Stewart as Jefferson Smith, a small town youth leader unexpectedly appointed to a vacant Senate seat by an opportunistic governor, the film is Capra's take on the Washington establishment. Smith comes to DC only to find it overrun with crooked political hacks like his mentor, Senator Paine (Claude Rains), and alcoholic reporters like the cynical Diz Moore (Thomas Mitchell). His only real friend in town is his assistant, Ms. Saunders (Jean Arthur), and even she thinks he's a bowlegged doofus when he first shows up. Gradually, though, his good-natured honesty wins her over even while it's raising the ire of his state's main power broker, Mr. Taylor (Edward Arnold). With all of Washington's power leveled against him, Smith sets out to expose the corruption he's uncovered. The film ends in a justly famous sequence in which Smith takes to the floor of the Senate and, with the insider coaching of Ms. Saunders and some sympathetic gaveling from the Senate Majority Leader (Harry Carey), he essentially saves democracy.

To watch the film again is to be reminded once more what a powerful screen presence we had in Jimmy Stewart. There was something innately humorous about him, of course, but there was something fragile, as well. After the war, that fragility would grow dark and paranoid in films like Vertigo and The Naked Spur, but in either a comedy or a drama something about Stewart pulls you in. He seems normal--an odd quality, actually, for a movie star--and because of that he seems vulnerable to all the things which we the audience are vulnerable to. He's joined by the glorious Jean Arthur as the world weary Ms. Saunders. Capra's favorite actress, Arthur played a similar role opposite Cooper in Mr. Deeds Goes to Town. Blonde and beautiful, she nevertheless had a perfect just-us-boys quality, a kind of spunky, wised-up tomboyishness that stood in contrast to the wide-eyed virgin aura of her male leads.


The film is every inch a fable, and since it came out it's been co-opted by Democrats and Republicans alike. Most American mythology surrounds great men doing great things--Washington defeating the British, Lincoln abolishing slavery, Roosevelt shepherding us through the Depression and WWII, Martin Luther King leading his people in the most successful civil protest in history--but we don't have many tales of Senators launching into heroic filibusters. Mr. Smith Goes to Washington creates a hero out of the procedural workings of Congress, not an easy feat, and it's clear why the film is a favorite of the very Washington establishment it skewers. Everyone likes to think he's the underdog outsider against the powers that be, and every politician tries to sell himself that way, no matter how absurd the claim may be.

If nothing else, this shows the limits, and even the inherent dangers, of democratic mythology. If everyone runs as an outsider, then who is on the inside? If every candidate for office claims the title of Mr. Smith, then how are we to know the real Mr. Smith when he shows up?

This is exactly the point, however, on which Mr. Smith Goes to Washington has something valuable to say, because if we think of Capra as a gullible sentimentalist then we overlook the very essence of his work. His sentimentality is always singing a counterpoint to a deep suspicion of American financial and political institutions. It's not simply that he gives us a behind-the-scenes power broker in the figure of Mr. Taylor, it's that Mr. Taylor is a wholly believable creation. This owes a lot to the flawless performance of Edward Arnold, one of the best actors in our cinema and a man who exuded cold intelligence. His performance here goes hand in hand with his work in what was perhaps Capra's darkest film, Meet John Doe with Gary Cooper. Arnold is joined by the invaluable Claude Rains as the corrupt Senator Paine. Together these two men head a vast and seemingly all-powerful combination of private wealth and political muscle. This film cannot be fully appreciated without acknowledging that it was created during rise of the fascist era--and it is always worth remembering that fascism at the time was a completely legitimized political option. Capra's portrait of a rich media tycoon bamboozling a credulous public into crucifying a well-meaning everyman remains a sobering image.

It was an image he had already mined in Mr. Deeds Goes to Town and one he would return to, for its starkest expression, in Meet John Doe. It is Capra's vision of the American people, in fact, that remains the most potent aspect of his cinema. Yes, he enjoys our good humor and our love of family and faith. Yes, he paints an affectionate view of our culture. But more than any other director of his period--even more than Welles--Capra painted a scary picture of society. In a Capra film, a crowd is always a potentially dangerous entity, its enthusiastic support or violent opposition being wholly fungible. Capra's vision of the American people as simple, decent folks is nearly always balanced by an anxiety about their susceptibility to rhetoric and political grandstanding. Simplicity has a dark side, he seems to be telling us, and we should never forget it. (The current media landscape, in which information is controlled by bigger and bigger corporations while at the same time being more easily disseminated, probably would have scared Capra to death.)

So Mr. Smith Goes to Washington is a fable, yes, but it's more in keeping with the fables of seventy years ago when parents didn't flinch from telling their children horror stories before bed. Just as fairy tells used to be violent and scary, Capra's fable has rough edges. It has a happy ending, but its big bad wolves are very big and very bad, indeed.

Here's an fascinating look at the film's impact in Washington since its controversial premier in 1939.

And you can watch the movie here.

A brilliant commentary on one of my all-time favorite films. Thank you.