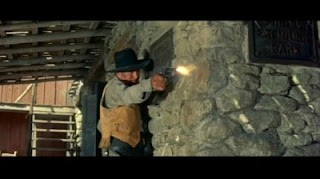 Man of the West was Anthony Mann’s last foray into the Old West before he began the third phase of his career. He'd started out as one of the best noir directors of the classic era (Raw Deal, Railroaded!), moved on to a lucrative and artistically successful collaboration with Jimmy Stewart on a cycle of Westerns (The Naked Spur, The Man From Laramie), and ended his career as the force behind a series of epics (The Fall Of The Roman Empire, El Cid). It was an amazing career, one of the best in the history of movies. In fact, it shows the depth of Mann’s work that a masterpiece like Man of the West has been overlooked by so many people.

The film is, in many ways, the best one Mann ever made. It is certainly one of the two or three best Westerns I’ve ever seen (up there with The Searchers and Unforgiven). It’s a dark and violent story about a man named Link Jones (Gary Cooper) who begins the film as an affable everyman traveling by train to find a schoolteacher for his little town of Good Hope. After a botched train robbery, Jones is stranded in the wilderness with a saloon singer named Billie Eillis (Julie London) and a card shark named Beasley (Arthur O’Connell). Together the three of them stumble into the hideout of the train robbers, a rough band led by an old outlaw Dock Tobin (Lee J. Cobb). Turns out Dock and Link know each other.

At the time Man of the West was made, the Western was at its peak. It had been the dominate genre in Hollywood (and, really the world) since the thirties. Indeed, there’s an argument to be made that the Western built Hollywood (after all, the desert is where you shot these horse operas). The genre would remain supreme until the seventies when the combination of Watergate and Star Wars killed it as a viable commercial force. On the one hand, institutional corruption threw the Western’s right-leaning worldview into disrepute. On the other hand, the space opera became the industry’s bread and butter. The frontier moved into outer space. The Western seemed old and hokey. It’s continued, of course, and good Westerns are still produced, but its day has passed.

Chief among the pleasures of the genre is a dark gem like Man of the West. As the film opens, we think we’re in one kind of film, but once Link and Dock square off their confrontation becomes a riveting drama. Mann had always been interested in violence as the result of thwarted masculinity and that theme finds its fullest expression in this film. There’s an extraordinary sequence in which one of Dock’s thugs, a psycho named Coaley (a young Jack Lord), holds a knife to Link’s throat and forces Billie to do a striptease. It’s a horrifying scene of symbolic rape (one aimed, really, at Link), and it is followed by an astonishing scene later in which Link beats Coaley and strips him naked, thus returning the symbolically sexualized assault.

This is dark stuff, but the film is deft in marrying its darkness to the bright form of the traditional Western. Look at the shootout in the ghost town of Lassoo near the end of the film. This sequence works on a richly symbolic level: while Dock thinks the town is a bustling mining community with a fat bank full of cash, it turns out to be an abandoned scattering of shacks. In this ghost town, Dock's hopes for the future are destroyed, and Link is able to confront his violent past. The sequence works as a piece of symbolism, but it also ends in a hell of a great shootout, up there with the gunfights in High Noon, Butch Cassidy And The Sundance Kid, and Open Range.

You can feel Mann’s presence throughout the film—and his direction was never better—but due credit must be given to the film’s other two main creative forces. The script by Reginald Rose (from the novel The Border Jumpers by Will C. Brown) is simply terrific. Every character has a distinct voice, and Dock Tobin in particular is fun to listen to as he gets excited and gives praise to God for the robbery the gang is about to pull off.

The other major player here is Gary Cooper. He had always been an actor uncommonly comfortable with silence, imbued with the screen actor’s greatest gift: his face registered thought on camera. Orson Welles once explained to Peter Bogdanovich that while Cooper knew nothing of craft, he simply showed up on camera. On the set, Welles explained, Cooper seemed to be doing nothing. Once his performance was projected onscreen, however, it turned out the camera had caught some magic not visible to the naked eye. By the time he made Man of the West, Cooper was nearly at the end of his life. He had pretty much created the Western hero with his performance in The Virginian in 1929, helped Capra define the Everyman in Mr. Deeds Goes to Town and Meet John Doe (the director once said, “Gary Cooper just looks like America to me”), helped create the screwball comedy with Lubitsch in Bluebeard’s Eighth Wife and Howard Hawks’ Ball of Fire, was Hollywood’s biggest male star in the forties, and gave his iconic performance as the beleaguered lawman in Zinnemann’s High Noon in 1952. His career was a towering body of work, and Man of the West is probably the best performance he ever gave. Watch him at the beginning, affable but withdrawn from the other characters, then watch his worry deepen, his inwardness turning dark as the film progresses. This is film acting of the highest caliber.

Cooper has long been one of my favorite actors, up there with Bogart and Mitchum, but he’s something else: he’s my favorite cowboy, more sensitive than Wayne but less neurotic than Stewart. With this film, Anthony Mann and Reginald Rose gave him one last great cowboy part to play.
at 9:48 AM

Jake,I don't remember much about Man Of The West- it must be 25 years since I last saw it- but I'll try to track it down now. Great article.

Sounds like I need to track down this movie! Thanks for sharing your insight.