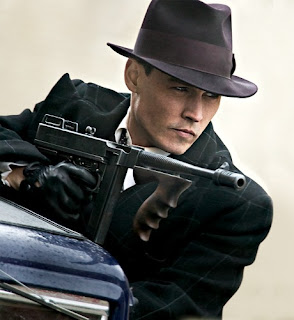 The gangster flick has had a curiously blessed history. Unlike the Western, which saw itself diminished with the passage of time (and usurped by the sci-fi movie), the gangster movie has continued flourish. Part of reason for this is that the genre has proven surprisingly supple when it comes to adaptability. We all know the landmarks in modern gangsterism: Coppola's The Godfather I and II, Scorsese's Goodfellas and Casino, and David Chase's sprawling 86 hour masterpiece, The Sopranos. To see how the genre can adapt, just track the difference between Howard Hawks' Scarface in 1932 and Brian De Palma's iconic remake in 1983. I'm not a fan of either Scarface, but it's interesting to note how eternal the basic storyline of the rise and fall of a criminal mastermind seems to be in American film. If you want to find the real progenitor for Pacino's over the top performance in Scarface, though, don't start with Muni in Scarface, go to the original badass, James Cagney in William Wellman's The Public Enemy (1931). In this film, Cagney pretty much defined the gangster: spitting against the wind, railing against the law, going down in a blaze of gunfire, only to survive and end up dying ingloriously on his mother's doorstep. It's the greatest pre-Godfather gangster flick.

Now comes Michael Mann's Public Enemies. It has no relation to Wellman's film except the title, but I have very high hopes for it. Based on the book Public Enemies: America's Great Crime Wave and The Birth of the FBI 1933-34 by Bryan Burrough it tells the story of the sudden rush of criminal enterprise in the 193os and the way it gave rise to J. Edgar Hoover. Here are three reasons why I'm very excited about this movie:

1. It's based on an excellent book. Burrough's history of the period is a page turner with shootouts, vivid characters, and compelling insights into the people and the period. At the center of the book is the fascinating figure of John Dillinger, a true gangster who nevertheless was seen by many as a kind of Robin Hood.

2. The film is directed by Michael Mann, currently our best filmmaker interested in crime stories. Mann isn't perfect, but his talent is undeniable. Miami Vice was a stinker, but Collateral was a strong piece of work (until the final ten minutes or so), and his 1995 Heat is as good a cops-and-robbers picture as anyone has made in the last twenty years. At least in theory, he's the exact right choice to make this film.

3. The cast is superb. Johnny Depp plays Dillinger--which is an inspired choice, I think. Depp first began to emerge as a serious actor in Donnie Brasco, and it'll be interesting to see what he does with John Dillinger. He's supported by Christain Bale, Billy Crudup and Giovanni Ribisi.
It's a great cast, but all eyes will be on Depp. He follows in the footsteps of Lawrence Tierney, Ralph Meeker, and Warren Oates. Oates, in particular, will be a hard act to follow, but I have high hopes that Depp will pull it off.

Being a bit out of the loop, i'd never heard about this until today.Sound good though.