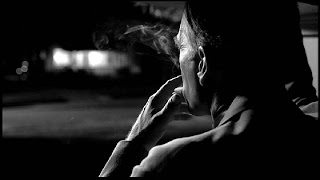 I've come to the conclusion that the most lasting imprint of film noir on modern cinema is its stylistic elements. This is mixed news. On one hand, style is surface-deep. It's a silver sheen that can be duplicated by any yahoo with black and white film stock, a fake gun, and a pack of cigarettes. Style can be ripped off.

On the other hand, style is important. Style is essential. The best noirs are often the most stylish. Watch the best of the best (Act of Violence, The Prowler, Angel Face, Pitfall, The Asphalt Jungle--just to name a few), and you'll see the style of noir as its meant to be seen.

Yet the best noirs don't coast on beautiful visuals. They use the noir style of b&w, slanted angles, and rain-slicked streets to create a dreamworld (or nightmare world) of sin and consequences. What modern filmmakers have to grasp is how to use the visual elements to tell stories that can be told no other way. Noir was invented out of necessity, after all.

The most famous recent experiment in noir was Richard Rodriguez's Sin City, adapted faithfully from Frank Miller's graphic novels. I liked the film, but like most hardcore noir geeks I know, I was underwhelmed by it. (warning: digression ahead! I blame most of that on Miller's source novels, which are fun as far as they go, but, again, seem too obsessed with surfaces. Great noir novels are great underground literature. Miller wrote one great book--Batman: Year One--and then seemed to give up trying to create literature. Maybe I'm wrong, but I've always loved looking at his books rather than reading them.)

Of course, the best elements of noir live on in retro noirs like LA Confidential, Devil in a Blue Dress, and Hollywoodland, and in neo-noirs like Se7en and Transsiberian, so there is always still hope that goof movie makers will keep the tradition alive.

Which brings me to the subject of short experiments in noir style. Maybe because the genre, more than any other genre, is known for its visuals, you can find many small productions tinkering with its basic elements. Here's a little sampling of some of these forays into the style and, maybe, substance of film noir:

(note: all these films contain graphic violence, cussin', or nudity. Which is fine by me, though it invites a discussion for another time: does part of the power of noir come from its limitations in these areas?)

Here's a little seven-minute film from directors Andrew Rowe and Jake Dunbar. It owes more to Sin City than classic noir, but it's interesting.

Here's a short film called Planet Man, a fifteen minute professional short film from director Andrew Bancroft. It's from that little known genre of homoerotic New Zealand sci-fi noir. Of these short films, it's by far the weirdest and least noirish (it's in color, for one thing), but it actually does the best job of building on the themes and visual set ups of noir. It also has the best acting.

Finally, here's an 18-minute short noir called Siren from writer-director Andrew Mandapat. It's a fun little working over of a common noir story: the love triangle turned bloodbath.
at 4:25 PM