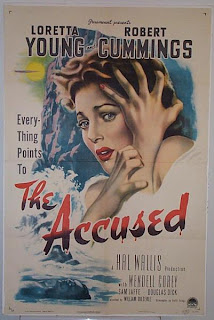 Movies are time capsules. When we look at them, we don’t just see vanished hairstyles and clothing. We hear modes of speech—and detect modes of thinking—that are as antiquated as old furniture. This is true of all films, of course, but film noirs are different from the usual Hollywood fare from the forties and fifties. Unlike most movies from Hollywood’s classic age—which were concerned with creating glittering dreams for audiences to lose themselves in— noirs are about the cracking apart of façades, the falling apart of dreams. They are mementos of disintegration. A film noir makes for a weird time capsule.

Take a movie like The Accused. It tells the story of a spinsterish psychology professor named Dr. Wilma Tuttle (Loretta Young) who takes a ride up to the ocean with a brilliant but troubled young student named Bill Perry (Douglas Dick). He’s bad news and out there alone on some cliffs overlooking wave-beaten rocks he tries to rape her. She kills him and then covers it up by pumping salt water into his lungs and tossing him over the bluffs. She makes her way back home and waits for Perry’s body to be found. Within a few days some fishermen find the dead boy, and soon Wilma has to contend with Perry’s legal guardian (Robert Cummings), as well as a smart cop (Wendell Corey), neither of whom believe Perry’s death was an accident.

The film is, for a while, surprisingly up front about its subject matter. The opening scenes with Wilma and Perry are the strongest parts of the picture dramatically. To be honest, I’ve never been a big fan of Loretta Young (there’s always something of a blank quality to her performances). Here, though, she’s quite good, giving Wilma both real intelligence and real fragility. You can feel, and believe, both her attraction to and revulsion from Perry. And Douglas Dick is excellent as her disturbed young student. Dick was one of those actors whose career never amounted to much (which you could say about most of the performers in film noirs), but in his brief time onscreen in this movie, he creates a scary portrait of arrogance, entitlement, and narcissism. It’s our loss that more opportunity didn’t materialize for this guy’s career.

Alas, The Accused is never quite as good after Wilma dumps him in the drink. It starts to throw a lot of psychobabble at us—a common failing in crime pictures at the time. While the cast is uniformly good (Wendell Corey is as dependable a performer as the sun), the film’s remaining suspense is Wilma’s attempt to outrun detection for her crime, and somehow director William Dieterle isn’t able turn up the heat enough. Dieterle was a competent journeyman director, but he wasn’t one to push more out of a script than was already there. His problem with The Accused is that the script by Pulitzer Prize-winning playwright Ketti Frings (based on June Truesdell’s 1947 novel Be Still, My Love) turns conventional just when it’s getting interesting. It’s good to see a film noir with a female protagonist, but the film’s female perspective seems constricted, perhaps because the film never fully deals with Perry’s attempted rape and Wilma’s self-defensive murder.

Most likely the culprit of this failure to engage with the dark side is producer Hal B. Wallis. Wallis was the man with the real control over the production and, just as importantly, he was a man interested in showmanship above art. Perhaps he felt a movie in 1949 time couldn’t deal head on with the realities of rape. The façade was still in place, I guess.

But the cracks were starting to show.
at 6:19 PM

Possibly Wallis' and Dieterle's male mind-set of the time prohibited the concept of a 'real' rape? A lot of men during that era (and there are still some lingering dinosaurs around the world) simply didn't believe that a woman could be raped if she didn't 'really' want to be. Notions like that could have blinded Dieterle and Wallis to the dramatic potential of the script. Also, it sounds like the role of Wilma would have been a better match for a stronger actress, such as Stanwyck or Davis.

Good call, Corey. One interesting element of the movie is that after Wilma kills her student, she's tormented by her guilt and pursued by a relentless male detective.

It's always interesting to look at these films and try to discern if we're projecting our own values back on them (i.e. do we read sexist films as narratives of empowerment, or vice versa, because of our modern mindset). Always a good question to ask. You might be on to something to suggest the the makers of the film were simply insensitive to the idea of real sexual violence. If you see the film, let me know what you think.

It wasn't Wallis or Dieterle's "mind-set about the film;" it was the Production Code and Joe Breen at the PCA's censor office that prevented the presentation of Loretta Young actually being raped in the film. She was attacked and killed her attacker before he could rape her, but what would have happened was implicit. The filmmakers weren't blinded to anything- it was what the censor (and the movie going public of that time) would tolerate.

Disagree about Stanwyck or Davis. This is more interesting than one of their vehicles precisely because Loretta Young isn't as hard or strong a persona. She has much more insecurity. The only issue with her pictures is that she often ends up acting foolishly, getting overwrought. There is another picture Cause For Alarm, which traps her in an even worse dilemma. Once again she seems to opt for hysteria and irrationality. The Welles film the Stranger victimizes her similarly, as she finds out she married a Nazi modeled after Martin Bormann.

I don't know why I don't get notifications when someone leaves a comment. I always see these things randomly years later. Anyway... Just now saw the comment about how it was Breen and the Production Code that prevented the film from really dealing with the subject of rape. This is half true. The Code did have many restrictions on this subject matter, but it was up to producers to push the Code and make their film. A year after THE ACCUSED, Ida Lupino made OUTRAGE, which did confront the subject head on. Same Code, same restrictions, but a different producer/director with a different artistic vision and goals.