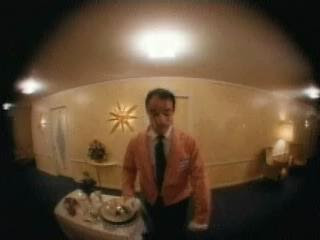 Jim Thompson’s novels have had a good shelf life. The Killer Inside Me has been made twice. The Getaway, twice. A Hell of A Woman and Pop. 1280 were both adapted in France. 1990 was a great year for Thompson; After Dark, My Sweet and The Grifters were both neo-noir masterpieces faithfully adapted (more or less) from two of his best books. Of course, Thompson had been dead at that point for about twenty-three years, but somehow that injustice seemed fitting. Thompson always said he’d be famous after he was dead.

Maybe it’s a good thing he didn’t live to see Steven Shainberg’s Hit Me, a loose adaptation of A Swell-Looking Babe. Thompson’s book—the story of a hotel bellhop caught up with gangsters and a beautiful woman—was no masterpiece itself. It’s a second-tier work that is never wholly convincing. Still, the book had some good qualities, as well. It worked some of Thompson’s favorite themes—namely incest, betrayal and doom—and he clearly drew on his own experiences as a bellhop in a sleazy hotel to help him flesh out his story.

Shainberg’s film, on the other hand, jettisons the incest and many of the nuances (such as they were) of Thompson’s story. Now understand, it is fine with me if an adaption takes a book and changes it. A filmmaker need feel no fidelity to a text. My problem with Hit Me, however, is not that it’s a bad adaption of A Swell-Looking Babe, it’s that Hit Me sucks all on its own.

The film stars Elias Koteas as Sonny, a bellhop at the Stillwell Hotel. He works the lonely night shift, sells bottles of booze out the backdoor, finds prostitutes for businessmen, and goes home to his mentally disabled brother (Jay Leggett). One night Sonny is called up to the room of a disturbed but beautiful woman named Monique (Laure Marsac). She slits her wrists more or less in front of Sonny, but when he tries to call a doctor she stops him. It’s just a cry for help. Sonny, being the protagonist in a film noir, falls immediately in love with her. In addition to Monique, however, Sonny has other problems. He biggest problem is that he owes money to the hotel’s head of security, Cougar (Kevin J. O’Connor). He’s also in danger of losing his brother to social services. His problems get worse one night when Monique seduces him on the floor of her hotel room (in a scene that strives for sexiness but fails because you can’t keep from thinking about how damn dirty that carpet must be). Right after they have sex, she lets out a piercing scream. Sonny, it seems, has been set up.

He’s bailed out of this situation by a friend named Del (Bruce Ramsay). Del says he’ll settle the situation with Monique, but then he ropes Sonny into a scheme he’s cooked up with Cougar to rip off a big-time gangster (Philip Baker Hall). Complications ensue.

In the broad outlines, this is a film noir plot. In execution, however, Shainberg’s film (with a script by the novelist Denis Johnson) is an utter bore. It tries very, very hard not to be boring, but therein lies the problem. This movie bores you senseless with its weirdness. What is the tone supposed to be here? It doesn’t work as a piece of suspense. The big robbery set piece, in which people are killed and the world falls apart around Sonny, doesn’t work. It’s pitched too high. This is the kind of film where the actors scream at each other in a fruitless attempt to approximate intensity.

It’s also the kind of film where everyone is odd. Koteas, a gifted actor, gives an incomprehensible performance. What is wrong with this guy? How is the audience supposed to feel about him? Is this supposed to be funny? (if I have to ask, by the way, then it’s not funny) Sonny’s twitchy and odd. It’s impossible to believe his erotic fixation on Monique because it’s impossible to believe in him as a sexual being. He’s a loose collection of tics and mannerisms and screaming fits. The rest of the cast doesn’t fair much better. Leggett’s unbelievable as the mentally disabled brother (he comes across like an actor playing a mentally disabled guy). Marsac is supposed to be sexy and sad, but she mostly seems depressed. Even great character actors like William H. Macy and Philip Baker Hall can’t get much traction with their brief roles as, respectively, a cop and a gangster. The only good performance in the movie comes from O’Connor as the nerdy-looking thug, Cougar. His weirdness actually works, maybe because it’s an understated weirdness.

Hit Me is, more than anything, a failure of tone. It’s not a long movie—only two hours—but it is a long experience.

For more on Thompson's books and movies, check out this page.
at 7:35 PM

never heard of it. for good reasons, by the sound of it.