THE POSTHUMOUS MAN Reborn! (and we're giving it away) 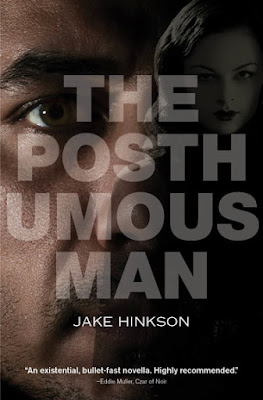 THE POSTHUMOUS MAN has gotten a makeover courtesy of David Cranmer, the mastermind over at Beat To A Pulp, who enlisted the brilliant designer Michael Kronenberg to retool the cover.

We're so excited about the new edition of THE POSTHUMOUS MAN we're doing a giveaway. Just comment on this thread and answer this question: What is your favorite film noir? (Neo or classic, don't matter to me. I'm a DETOUR man myself.) We'll put all the names of the people who respond into a hat and draw seven random names.

The new edition will drop early next week, so respond soon.

Not sure if Blue Velvet is counted as Neo but that film sent me in all sorts of directions. Eventually I found my way to White Heat which I guess covers the Classic!

Congrats on the re-launch. I love the new artwork. I have a soft spot for "Where The Sidewalk Ends". I first saw it when I was attending UCLA. They had a Preminger retrospective in the early/mid 80's. Free for students!

Cape Fear, I've gotta say. Of course, I liked the JDM book it was based on even better.

Neo-noir,Chinatown. Classic, Oct of the Past.

Classic - Out of the Past, Contemporary - Hard Eight

Hi,
I have to choose: The Narrow Margin, because it was thee first Film-Noir I ever saw somewhere in the eighties on the TV. It always stayed with me and and I became a fan of Charles McGraw later on in life....

Blade Runner is my favorite noir. It has all the classic elements (especially in the voice-over version) but with a totally unique take on the genre.

The Asphalt Jungle - great heist/caper film with one of the best casts in film history.

I'm going to have to go with Born to Kill.