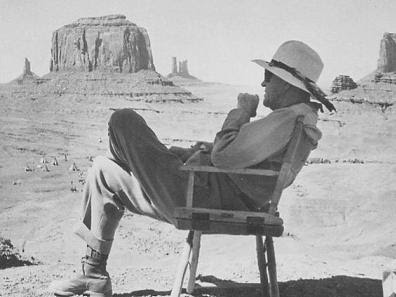 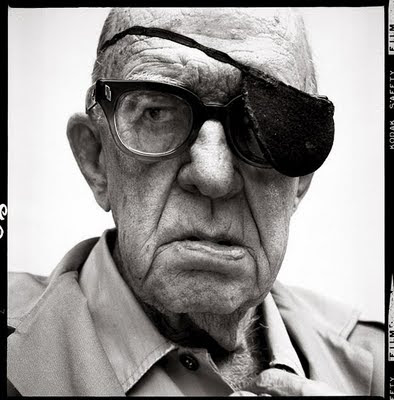 I want to begin this look at Peter Bogdanovich's excellent reworking of his 1971 documentary DIRECTED BY JOHN FORD with a grim observation followed by an even more despairing prediction. The observation: John Ford's reputation has been greatly diminished by the passage of time. The prediction: I don't think it's coming back.

One of the interesting oversights of Bogdanovich's fascinating documentary is its failure to deal with the reality that for new generations of filmmakers John Ford is more of a historical footnote than an inspiration. The Western genre--once the unquestionable champ of the box office--is all but washed up, replaced by science fiction. The myth of the American frontier has been replaced by the superhero narrative and the space opera. With the Western goes much of Ford's appeal to new audiences.

Watching DIRECTED BY JOHN FORD you wouldn't know that his reputation, and the future of his work, stands in such peril. Bogdanovich originally made the film in 1971 when a generation of up and coming directors (including Martin Scorsese, Steven Spielberg, and, of course, Bogdanovich himself) considered Ford to be the grand master of American films. The new reworking of the film mixes new interviews with Scorsese, Spielberg, Clint Eastwood, and Walter Hill along with older interviews with John Wayne, Henry Fonda, and Jimmy Stewart.

If that description makes the film sound like a glorified DVD extra (like the excruciatingly fawning "documentary" that accompanied the DVD of THE SEARCHERS) it shouldn't. Bogdanovich has made a real documentary, one of the best I've seen in fact, on the art of directing film. He avoids the usual talking head platitudes and focuses instead on the creation of scenes, such as a riverside dialog scene between Jimmy Stewart and Richard Widmark in TWO RODE TOGETHER. He includes Spielberg's funny anecdote of meeting Ford and receiving a gruff lesson in how to frame a shot. Ford's advice to the young director about where to put the horizon is unromantic, practical, and brilliant.

As good as the material on directing is, the material on Ford the man is just as interesting. Something about Ford that is easily overlooked given his stoic reputation is that he was, in many ways, a very weird guy. He dressed like a bum, walked around chewing a handkerchief, and picked out random people for vicious public humiliations. This film gives you a sense of the man's oddness. And while several Ford biographies over the years have reported an affair between the director and Katherine Hepburn, Bogdanovich provides a remarkable artifact: a piece of audio accidentally recorded between Ford and Hepburn in private during their last meeting. You almost feel wrong listening to something so obviously personal.

Bogdanovich has long been a personal favorite of mine. THE LAST PICTURE SHOW, WHAT'S UP, DOC? and SAINT JACK are three tremendous films, and PAPER MOON is, frankly, one of great joys of my movie-watching life. It's comfort food, a film I can keep going back to, again and again, like TO HAVE AND HAVE NOT, NOTORIOUS, THE TRIAL, or OUT OF THE PAST. Bogdanovich was right to go back and rework his earlier version of DIRECTED BY JOHN FORD--though I wish the two films would come packaged together. We can be happy we have this look at Ford's career.

Which of course brings us back to the man and his movies. One thing Bogdanovich's film makes clear is that Ford was a master of the movie visual. His images pop with vitality, even though he rarely moved his camera unnecessarily. I had always considered Ford a master craftsman, but I didn't really appreciate his direction until I saw STAGECOACH and THE SEARCHERS at the Film Forum in New York a few years ago. You simply have to see Ford's films on the big screen. He was thinking in terms far, far bigger than a television screen. Monument Valley looks pretty on TV, but on the big screen, in THE SEARCHERS, it becomes a barren landscape of mausoleums, the great emptiness swallowing the puny echo of gunshots. Human emotions, so hot and uncontrollable, are ultimately placed into a historical framework that renders them tragic in their uselessness.

So, yes, Ford was a great director, but he was a far more flawed director than Bogdanovich's documentary would seem to indicate. He was an unabashed militarist for one thing, and his films--with some notable exceptions--undeniably glorify combat and war. His treatment of Native peoples is, by and large, pretty terrible. Native Americans in Ford's films come in three varieties a) inhuman targets, b) comic simpletons, or c) noble savages. His one attempt to deal with them as people--CHEYENNE AUTUMN--is a few days late and quite a few dollars short. Moreover, Ford was a sentimentalist. Whitewashing violence and then doting on virginal mother figures, Ford can be, in the worst sense of the word, archaic. After all, it's a good thing that films seldom treat war like a knee-slappin good time anymore. And it's a good thing when films give women more to do than keep the homes fires burning while the boys go out and booze and bond. John Ford was a director of massive, undeniable skill. His eye for composition was impeccable. He gave us moments and movies that should be seen and treasured. But his work is aging, aging faster than the work of Welles or Hitchcock or Hawks, because it has a fidelity to a discredited myth. We've moved on in many ways, leaving much of Ford's life's labors to sit in the sun like the spires of Monument Valley.

Directed By John Ford is available on Netflix.

Here's a brief clip from the film. I don't know why there are subtitles in the clip. Subtitles don't appear on the DVD version.

I've written briefly about Ford and The Searchers before.

Here's an overview of Ford's career at Senses Of Cinema. They have have a nice career overview of Bogdanovich as well.
at 7:49 PM