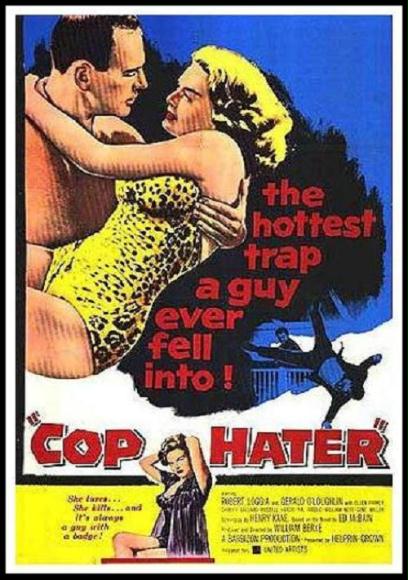 If I’m honest, I have to admit that I don’t view every film objectively. One tries, of course, to approach each new object of art—be it a composition by Beethoven, or a play by Shakespeare, or a B-movie potboiler by a hack director—without a lot of preconceived notions. After all, the joy of discovery far outweighs whatever meager satisfaction comes from having a negative perception confirmed. Or put another way, I’ve had enough amazing experiences uncovering forgotten, dusty old movies (GUILTY BYSTANDER, TOO LATE FOR TEARS) that I always try to hold out hope.

Take COP HATER. Here’s a movie with one of those titles that’s so stripped down and blunt it inspires a laugh. It’s based on Ed McBain’s first 87th Precinct novel, and it features a young Robert Loggia in his first starring role. So far so good, but the film is also directed by William Berke.

This is where my preconceived notions come in. This is where my attempts at objectivity smash up against the rocky shore of my experiences. William Berke is a director who directed some 90 films or so over the course of a career more notable for quantity that quality. His best work was B-grade; most of it was Z-grade. Optimist that I am, I have wasted more time than I would like to admit dredging Berke’s filmography looking for a diamond in the dunghill.

Well, COP HATER is definitely not a diamond but it is a curious object all its own, like a weird little rock you pick up just because it looks interesting. The story revolves around a series of cop killings that seem to have no motive and no connection to each other. Robert Loggia stars as Detective Steve Carelli, one of many cops on the case. Our focus on Carelli seems almost random. He pursues leads, none of which are very strong, and we tag along. We meet his partner Detective Mike Maguire (Gerald S. O’Loughlin) and Maguire’s wife Alice (Shirley Ballard) who seems to spend her every waking moment lounging by the window in her underwear. We also meet Carelli’s pretty and chipper girlfriend Teddy (Ellen Parker). These characters are surrounded by a gallery of cops and hoodlums and opportunistic reporters and whorehouse madams.

If you’re accustomed to the lean and mean plotting of many low budget crime films, it’s not immediately clear why all these pieces are being moved into place. You have to remind yourself (at least I had to remind myself) that this is an Ed McBain story and that McBain’s great gift was to paint his crime stories on large canvas. This is not just a story about Detective Carelli, it’s a story about the 87th Precinct. The murder plot is just an excuse to meet new characters.

Berke’s direction is largely workmanlike. There are few shots that are memorable in and of themselves (though the wonderful opening sequence that follows a cop around his apartment as he gets ready for work is a notable exception), but the limitations of the production are rarely intrusive. If I can’t help wondering what a truly gifted director would have done with this same material, I must also admit that the movie works.

It not only works, it has its own curiosities. For instance, it is a surprisingly sexual film. Carelli’s relationship with Teddy is particularly interesting. She is deaf, but the film (unusual for its time) lets her be a real character. Though entirely silent, she is sweet and cheerful, and she and Carelli have an intense physical rapport. This makes a scene near the end in which she is sexually assaulted by a crazed maniac all the more disturbing. Ellen Parker, without speaking a word, gives the most memorable performance in the movie.

Most of the other performances in the movie are pretty good. Loggia makes for a perfectly human protagonist (like all the other cops in the movie, he drinks too much). And there’s a nice scene toward the middle when a young Jerry Orbach shows up as the leader of a gang of juvenile delinquents. Orbach’s only about twenty-two or so here, but he already seems to have seen everything twice and deemed it all bullshit.

COP HATER is well-worth checking out, a budget epic with good performances and a heap of sexual tension. Come to it with an open mind, and you might find yourself happily surprised. I know I was.

Sounds very interesting. I'll have to take a look. I love Jerry Orbach.

Just watched it because I am reading the books. Follows the book quite closely. I enjoyed the movie.