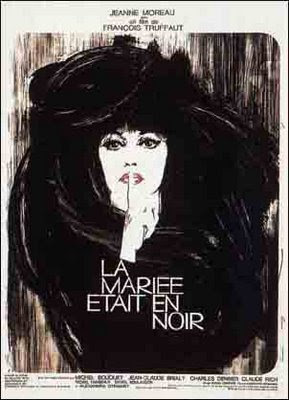 I'm almost always underwhelmed by the films of the French New Wave. That's a dangerous thing for a cineaste to admit, but I'm only reporting the truth of my experience. One approaches these movies with the knowledge that they revitalized cinema, that they were made for movie geeks by movie geeks, that they shattered taboos and changed the way movies were made. And yet I don't really love any film of the New Wave, and my appreciation for Godard, Rohmer, Rivette, and even Chabrol is mostly academic. (Although, interestingly enough, I do love films by Melville and Malle, two directors loosely associated with the movement.) I can study a New Wave film, but I can't seem to love one.

This is even true of the films of good old Francois Truffaut. For many people, Truffaut is one of the patron saints of cinema--an engaging, intelligent writer and critic, maker of some of the most acclaimed films of the New Wave movement (The 400 Blows, Jules and Jim). He was one of the early champions of film noir, and Shoot The Piano Player, his adaptation of Goodis' Down There was an important contribution to the rediscovery of the great forgotten writer.

One could say the same for The Bride Wore Black, an adaption of the novel by Cornell Woolrich (writing under the name William Irish) perhaps the most underrated crime writer in American history. The film stars Jeanne Moreau as a widow working her way through the men who murdered her husband. One by one she knocks them off, in increasingly complicated ways. Quentin Tarantino has stated that he didn't see the film before he made Kill Bill, but, consciously or not, he did lift some things from Truffaut.

The Bride Wore Black isn't a bad film--I particularly like the last ten minutes or so--but watching it recently on the big screen (at the AFI's Truffaut retrospective) I was struck again by my lack of enthusiasm for New Wave attempts at noir. There's something clinical about this film, an overly intellectual approach to the material that saps it of suspense or excitement. Moreau's first murder is filmed in a montage that strikes my eye as simply sloppy. The second murder is done in a coldly efficient long take, but the third murder (death by hall closet) seems hokey and takes forever.

On this last point--the amount of time Moreau takes in carrying out her revenge--I'd like to say another word. As a fan of long movies, I have no problem with a director stretching out moments or scenes or sequences for effect. Bring on the long takes, I say. But the stumbling block of a film like The Bride Wore Black is that as a member of the audience I'm incredulous at the planning of the heroine. Moreau's fourth murder--the killing of the artist--involves a plan that drags on and on for no discernible reason. Perhaps it's the boorish American in me, but I say if you're going to kill someone, then get on with it. (And as long as I'm being boorish, at forty years old in 1968 Moreau was too old for the role. She tells us that she and her husband had been in love since they were small children and never once looked at anyone else--so did they really wait so long to get married or is she supposed to be playing a much younger woman?)

The French New Wave was a great thing for cinema, especially American cinema. The writers and directors who came out of the movement were devoted fans of American filmmakers like Hawks, Hitchcock and Ford. They helped bring attention to Orson Welles at a time when American critics had written him off. And they reclaimed the crimes films of the forties and fifties, championed unknown directors like Edgar G. Ulmer and forgotten stars like Lizabeth Scott and Charles McGraw, and christened the genre Film Noir. God bless the French. But there is a certain tension missing from a film like The Bride Wore Black. Perhaps this is because noir is the result of a distinctly American tension--the balance between optimism and pessimism, a grim fatalism that descends on the thwarted romantic idealist.

I envy your being able to see it on the big screen. I haven't seen this in years, and while I remember liking it, your comments make me want to revisit and reevaluate.

I also share your enthusiasm for Louis Malle - I've always been drawn to his movies. I didn't know what the New Wave was when I got into him, but I appreciated how he could change styles to fit the stories and always seemed to try something different. That approach, in and of itself, separates him from the New Wave (much of which I like, actually). I think that is part of why his best movies continue to hold up - he didn't always put himself first.

MMMMmmmmmmm....maybe...but no, I love Breathless, so i do.

I agree with you, Cullen. Malle was like a shape shifter. It' shard to find a steady style, but it stuff was often amazing. I particularly love Au Revor Les Enfants. That movie kicks my ass every time I see it.