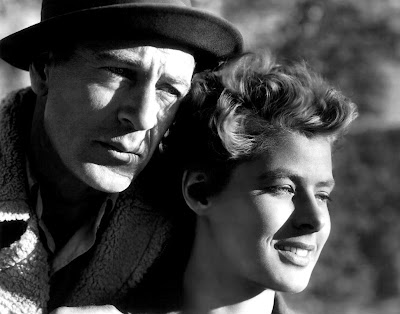 For Whom The Bell Tolls is a dated movie, dated in that way people mean when they say, "They don't make 'em like that anymore." It's a museum piece in a certain sense because it does indeed feel like a movie from a previous generation. It's a huge production with an overture and intermission, big love scenes and bigger action sequences, with a score that never lets you forget you're watching an epic. If you like that kind of thing, this is a movie not to overlook.

The film is an adaptation of Hemingway's 1940 novel about an American named Robert Jordan (Gary Cooper) fighting against the fascist forces in Spain in the thirties. Jordan meets up with a band of Loyalist fighters hiding in the mountains. His mission is to destroy a pivotal bridge before a major republican offensive, but he comes into conflict with Pablo (Akim Tamiroff), the drunken leader of the ragtag mountain fighters. Pablo's woman, the imposing Pilar (Katina Paxinou), sides with Jordan, and they become the de facto leaders of the group. Jordan also meets a beautiful but traumatized young girl named Maria (Ingrid Bergman). Jordan and Maria have only a few days together before the big battle, a battle so improbable it verges on a suicide mission.

The film was directed by a fellow named Sam Wood, an interesting figure in Hollywood history. Wood was a hardcore rightwinger who served as the president of an organization called Motion Picture Alliance for the Preservation of American Ideals (a group which included both Cooper and John Wayne, and which helped launch the political career of Ronald Reagan). Wood was instrumental in bringing the House Committee's investigation of "Un-American Activities" to Hollywood in the late forties, and he would very likely have pushed through a "loyalty oath" at the Director's Guild of America had it not been for the objection of notable artists with unimpeachable "patriotic" credentials, chief among them being John Ford*.

All of this makes it ironic that Wood helmed the adaptation of Hemingway's unabashed liberal novel, a novel in which the hero is fighting on the side of Communists. Of course, since the movie was made in 1943, it made for good wartime propaganda. Wood and his adaptors stripped the movie of any overt political content (aside from a few digs at Germany's and Italy's fascists). They focused instead on the stuff of big scale movie making: romance, comedy, action, and drama.

In terms of craft, the film isn't exactly perfect. There's some truly awful use of back projection, which is especially jarring in such a high dollar production. And the comedy, mostly coming in the form of a buffoonish Gypsy character played by Mikhail Rasumny, wears thin. As with many movies of the time, the "ethnic" characters here are played by actors from a variety of backgrounds. This is nowhere more apparent than the casting of the Swedish goddess Bergman as a 19 year old Spanish girl.

And yet for all those faults, For Whom The Bell Tolls strikes me as a triumph of old school movie making. For one thing, for all its grandiosity, the film is really about the gentle romance at its center. Cooper was never better as a leading man than here. A quiet, Montana-born outdoorsman, Cooper was perfectly cast** as the laconic Robert Jordan (and is it me, or does his look in the film--fedora, leather jacket, work clothes--seem like a forerunner to Indiana Jones?). At the same time that he cuts a dashing figure, however, Cooper's greatest attribute in the role is his slightly androgynous quality. Never as aggressively masculine as Wayne, there was something intrinsically gentle about Gary Cooper***. His pairing here with the exquisite Bergman is a cinematic gem.

As for Ingrid Bergman, there are times when I'm pretty sure she was the greatest movie star who ever lived. At other times, I am absolutely certain she was. It is very nearly impossible to write about her without talking about her beauty, but what of it? Movies are largely an excuse to stare at people for two hours. Who wouldn't want to stare at Bergman? She wasn't simply beautiful, she was also the best actress of her era, a performer who's face communicated every confusion and thought to the camera. She's miscast here only in the sense that she is in no way believable as a 19 year old Spanish girl. (But the classic Hollywood film always performed a weird magic, wiping away ethnic demarcations, translating the story and characters into the American idiom. For instance, the characters all speak English even though they're Spanish. Yet at one point, they have a discussion in which they make clear they're 'speaking' in Spanish. This is a hokey device, I suppose, but I'm not sure the implications of it have really been examined.) At any rate, Bergman's performance isn't about portraying a certain age or a certain ethnicity. She plays the character's fear and exuberance, her love for this man and her scars from the past. The scene where she tells Cooper about the atrocities committed against her by a group of soldiers is masterfully handled (and surprisingly candid for its time). When she tells him she's afraid he won't love her anymore, and tearfully promises him "but I was telling the truth when I said I never kissed anyone before you" Bergman is heartbreakingly vulnerable. Cooper's response to her is simply beautiful. This was the finest scene either of them ever played.

In addition to Cooper and Bergman, the film features pitch perfect performances from Akim Tamiroff and Katina Paxinou. Its final act is a terrific extended action sequence (where the special effects hold up remarkably well nearly seventy years later), and the action depends on constantly evolving characters. Tamiroff's drunken, murdering Pablo, for instance, is an unfolding mystery of a man right up until the end.

For Whom The Bell Tolls is a old fashioned epic full of big, sweeping emotions. It's not for everyone, but if you're in the market for a stirringly heroic story of love and sacrifice, it a prime specimen.

*To read a little about the fight between Sam Wood and John Ford over the loyalty oath--a fight in which Ford made pointed references to the leftist politics of Hemingway's story--read Joseph McBride's fascinating article, The Convoluted Politics of John Ford.

**Hemingway selected Cooper himself. The two were close friends, and some writers maintain that Hemingway even based aspects of Robert Jordan on the actor. A new documentary examines their friendship. View a trailer for it here.

***I've written before about this gentle quality in Cooper. Read here.

One final note: Wood reteamed with Cooper and Bergman two years later for a big budget rip-off of Gone With The Wind called Saratoga Trunk. It is, I'm sad to report, simply awful. Some biographers have maintained that the actors only made the movie in order to continue an affair they'd begun on FWTBT. I hope the sex was great, because the movie is dreadful.
at 11:49 AM

A film I own and have watched several times. I want to like it more than I do because I love the book. Hemingway as you can imagine hated it. He wondered how Coop could make love to Bergman with all those clothes on. Anyway, I would give it 2 1/2 stars outta four.

Hemingway totally hated it, though he loved Coop. His big beef, as far as I know, was the way the filmmakers stripped the story of its political content. A fair criticism, I think. According to Jeffery Meyers book, Gary Cooper: American Hero, Hemingway was also ticked off that Coop beat him to Bergman.

i've never seen this, but will now. watched a strange and sad film yesterday, "wild strawberries" by ingmar bergman. seen it?

also, have you watched the hemingway/cooper doc?

I like Wild Strawberries, but it's not my favorite Bergman. I always found it a little on the slow side frankly (Woody Allen borrowed the structure for his movie Deconstructing Harry, a movie I loathe). Ingmar is great, though. I'm a huge fan of The Virgin Spring, Scenes From A Marriage, The Passion of Anna, and his Silence of God trilogy (especially the last film, The Silence). And Persona is a weird and disturbing masterpiece of a movie.

I haven't seen the Cooper/Hemingway doc. As far as I know it is yet to be released. It was made a couple of years ago, but the website says it's supposed to be released sometime this fall.

I almost forgot, Hannah. You must see Bergman's film Autumn Sonata. It was his only film with Ingrid, and it costars Liv Ullman. It's terrific. Brutal and harrowing, but terrific. It's like a horror movie made up entirely of the terrible things a mother and daughter can say to each other.

ok, that sounds horrifying, but for you, i'll check it out.

speaking of brutal and harrowing films, this is a more recent one, but i'm curious if you've seen The Piano Teacher? jesus god.