A Voice From The Dark: Frank Lovejoy's Journey Into Radio Noir 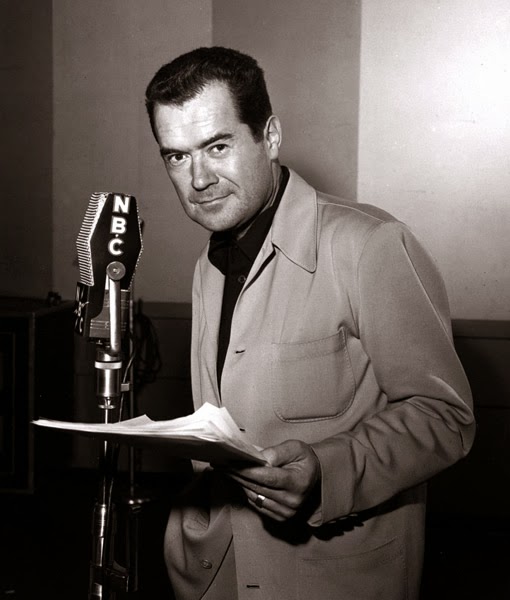 Note: This article first appeared in the Spring 2013 issue of the film journal NOIR CITY.


Before he got drafted into the movies (particularly film noir) in the fifties, Frank Lovejoy had a successful decade-long career in radio. He was a workhorse, appearing in thousands of broadcasts across a range of shows, and by the time Hollywood came calling he was already a star on the east coast.
He’d started out in the radio business as an announcer for the popular station WLW in Cincinnati, sometimes known as the “cradle of the stars” for all the on-air talent (Rod Serling, Red Barber, Doris Day, and Rosemary Clooney among them) who started there before springing into the big time. Like many others, Lovejoy made a name for himself in the Midwest and used it as a way to get to the larger stations in New York.

Once there, he quickly became a sought after voice man. Distinctive without being overly mannered, his work began getting noticed on crime shows like GANG BUSTERS, MR. DISTIRCT ATTORNEY, and THE SHADOW. He originated the title role on the superhero show THE BLUE BEETLE, portraying a young cop turned masked crime fighter. After 13 episodes (with titles like “The Opium Ring” and “Smashing the Restaurant Racket”), he passed on the mantle of the Blue Beetle to another, uncredited and anonymous, actor.

He stayed busy on the radio all through the 1940s. His weathered baritone made him a particularly good fit for crime shows: MR. AND MRS. NORTH with Alice Frost and Joseph Curtin, BOSTON BLACKIE with Chester Morris and Mel Blanc, THE MOLLE MYSTERY THEATER with Richard Widmark, MURDER AND MR. MALONE with Jack Webb. In 1945, he narrated the series THIS IS YOUR FBI and like virtually everyone else in radio he did work on the hit mystery series THE WHISTLER. When he wasn’t bringing his talents to bear on crime stories he did everything else on the dial from soap operas like BRIGHT HORIZON, MODERN ROMANCES, and BRAVE TOMORROW to war dramas like WORLDS AT WAR and westerns like DESTINY TRAILS.

The golden age of radio came to a close about the time Lovejoy packed up and moved out to California to go into the movie business. In the fifties, radio was hit even harder than movies by the rise of television. The days of the family gathering around the living room console to listen to stories was coming to an end. The smart money, everyone knew, was on the little box with the talking pictures.

Still, radio didn’t die overnight (though it declined steadily through the fifties) and, at least for a while, the practice of film-to-radio adaptation remained a lucrative business. Lovejoy already had practice at bringing movies to the air. He and Everett Sloane had starred in a 1941 adaptation of “Angels with Dirty Faces” for the PHILLIP MORRIS PLAYHOUSE, and after he became a bona fide movie star he was in even higher demand to do big name programs on the air. He starred in “The Deeper Shadow” with Ray Milland for THE FAMILY HOUR OF STARS in 1948. And for the LUX RADIO THEATER he did “The Treasure of Sierra Madre” with Bogart and Walter Huston in 1949, and “Strangers On A Train” opposite Milland and Ruth Roman in 1951.

From 1950 to 1952, he starred in his best series, the highly entertaining radio noir NIGHT BEAT. He played a reporter named Randy Stone who roamed Chicago at night looking for stories. In every episode (with titles like “Slasher” “Pay Up Or Die” and “Flight From Fear”), Stone met some new cast of characters, usually desperate souls in need of help. Sometimes Stone helped them. Sometimes he couldn’t.

What makes NIGHT BEAT such a treasure today is that it is a full on noir radio series. For one thing, it takes place in urban spaces devoid of daylight. In terms of style, the overall sound design is geared toward the insinuation of darkness. This means a strong emphasis on, of all things, silences. Odd moments play out in the dark when neither we nor Stone are quite sure what is happening. The show also makes inspired use of footfall, the clack of shoes conjuring the emptiness of city streets at two in the morning.

Perhaps even more importantly, NIGHT BEAT has a noir heart. Stone isn’t a hero or even a tough guy. He’s like a slightly more warm-hearted version of Weegee, the famous real life crime scene photographer who lived at night and chased his police scanner all over New York’s Lower East Side. In narration that Lovejoy reels off like a bleary-eyed David Goodis character, he recounts his “wanderings” through the city. And because Stone, even more than most noir protagonists, is a citizen of the night, his world of shadowy alleyways and late-night bars and all-night diners is inhabited exclusively by the distressed and the disturbed and the criminally inclined.

There’s real pulp poetry here. In an excellent episode titled “Julie the Jukebox Girl” Stone begins by telling his listeners, “I cover the night, and my beat is eight square miles of darkness. Every evening I start walking into it and let it swirl around me and let it swallow me up. Part of me relaxes and part of me becomes tense and weary.”

Summing up the people he meets on his nighttime sojourns he says, “The night is filled with its own brand of people—the lonely, lost, mixed-up, screwy people of the night, drifting out of the darkness like fragments of a nightmare.”

Tying it all together is the wonderful voice of Frank Lovejoy, slipping effortlessly from narrating his adventures to being in scenes with a supporting cast that included, at various points in the show’s run, his wife Joan Banks, William Conrad, Jeff Corey, and Parley Baer. His style is emotive yet restrained, demonstrating that he was almost as subtle an actor on the radio as he was in film. As early as the second episode of the series—“The Night Is A Weapon” from February 1950—Lovejoy had created a voice for Stone that was crisp and authoritative when it needed to be but which also gave the character a certain thoughtfulness and gruff compassion.

After the show ended in 1952, Lovejoy played Randy Stone on television in an episode of FOUR STAR PLAYHOUSE entitled “Search In The Night.” The character didn’t get his own series (instead, Lovejoy starred in MEET MCGRAW, a series which had also grown out of an episode of FOUR STAR PLAYHOUSE). Fans of the character were probably disappointed that Stone didn’t get his own show, but since NIGHT BEAT lives on in various formats on the internet, Lovejoy can still be found out there in the dark, looking for a story and getting into trouble.

I've listened to lots of episodes of Frank Lovejoy's Night Beat and agree it is a great series and very noir.
Thanks for reviewing Lovejoy's radio career.

I loved Night Beat and I loved your tribute to it. Thanks!