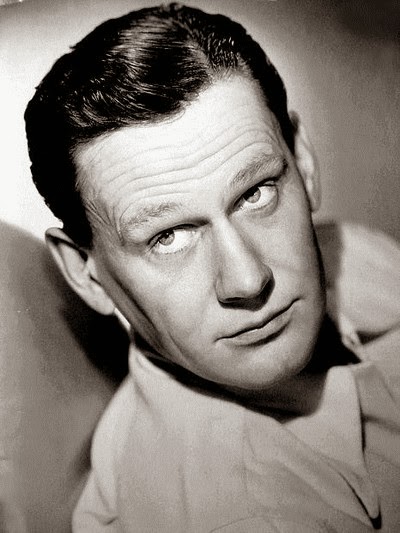 Today marks the 100th birthday of the great character actor Wendell Corey. Corey, who passed away in 1968, was an indispensable part of the classic crime film. With his sad eyes and world-weary delivery, he helped ground movies like Byron Haskins's I WALK ALONE (with Kirk Douglas, Burt Lancaster, and Liz Scott), William Dieterle's THE ACCUSED (with Loretta Young), Budd Boetticher's THE KILLER IS LOOSE (with Joseph Cotton and Rhonda Fleming), and Hitchcock's REAR WINDOW (with Jimmy Stewart and Grace Kelly).  In every case, Corey gave the proceedings an air of reality. He also costarred alongside Liz Scott, John Hodiak, and Burt Lancaster in one of the most hilariously bad movies ever made, Lewis Allen's masterpiece of awfulness DESERT FURY. It was Corey's first film. After that, everything must have seemed like an improvement.

The son of a minister, Corey worked in films until the end of his life, but he also dabbled in conservative politics. He ran for Congress in 1966, but lost the primary. When he died two years later, he was only 54 years old, but apparently a lifetime of drinking caught up to him early. You sometimes read that he was drunk onscreen, but--at least for me--whatever private demons he wrestled with only made his work more interesting. I'm always happy to see his name in the credits.

One of his best (and most underrated) noirs was the excellent HELL'S HALF ACRE with Evelyn Keyes and Marie Windsor. I did a write up of the film over at Criminal Element a couple of years back. Check that out here.
at 7:52 AM

I may be a minority in this, but I liked Corey's performance in The Furies, in which his low-key style is pitted against two acting powerhouses, Barbara Stanwyck and Walter Huston. I thought Corey made a good choice by underplaying in his scenes with them; you notice him because he's so quiet and self-assured, and he holds his own throughout the film.

It wasn't a noir film, but I really liked Corey in 'Harriet Craig.' When he finally gets wise to Joan Crawford, one gets a sense of how very underrated and underutilized his talents were.