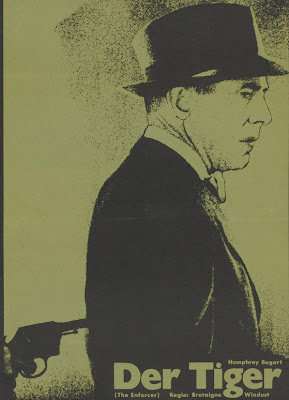 The Enforcer was one of those movies I saw before I ever heard the term film noir. In junior high, I discovered Bogart the way I suspect most people do, via Casablanca and The Maltese Falcon. Then followed The Big Sleep and To Have And Have Not, Key Largo and The Treasure Of Sierra Madre. Did anyone ever star in so many great movies? I haven’t even mentioned In A Lonely Place yet. You can dive pretty far into Bogart’s career without hitting anything short of a masterpiece. Sooner or later, though, you get to the second tier, but there awaits a nice surprise. Even Bogart’s second tier movies are pretty damn great.

The Enforcer maybe a second tier movie by Bogart’s standards, but for most other people it would be a career highlight. The film tells the story of a district attorney named Martin Ferguson (Bogart) who is quickly approaching a vital day in the trial of a man named Albert Mendoza. Mendoza’s accused of running an outfit called Murder Incorporated, a murder-for-hire service. Ferguson has a good case against Mendoza hinging on the testimony of a sweaty thug named Rico, one of Mendoza’s old lieutenants. Rico’s a nervous wreck, sure that he’s as good as dead. Meanwhile, Mendoza sits quietly in his cell, a confident smile on his face.

The film unfolds over a long night, with several flashbacks, as Ferguson tries to holds his case together. When Rico makes a clumsy attempt to escape and winds up splattered all over the sidewalk outside the courthouse, Ferguson makes a mad dash to shore up his case against Mendoza.

One of the most impressive things about The Enforcer is that although it’s billed as a star vehicle for Bogart, it’s really an ensemble piece about the murder for hire business. Mendoza is played by Everett Sloan, one of the great unsung character actors in classic Hollywood. Discovered by Orson Welles, he played the faithful Mr. Bernstein in Citizen Kane and the evil Mr. Bannister in The Lady From Shanghai, two roles which give some idea of the scope of the man’s talent. Here he’s a calm little killer whose confidence comes from the knowledge that he’s smarter than everyone else. Rico is played by the wonderful actor Ted de Corsia. In flashbacks we see him as cool killer, but by the end he’s coming apart at the seams. Sloan and de Corsia are joined by a parade of thugs: fat Zero Mostel, feral Michael Tolan, and cold-eyed Bob Steele. It’s a great cast, headed by Bogart at his hardass, no-nonsense best.

What most impressed me the first time I saw the movie, though, and what continues to impress me about it, is the feel of the thing. The film is dark and lean, with a cold surface. This really is a tough little crime picture with none of the usual Hollywood sweetener. Unfolding over a long night, full of murders and flashbacks to murders, with an endless supply of cigarettes smoked under hot overhead lamps, The Enforcer felt like noir to me long before I had any idea what the term meant. It’s no accident that the film has always been more highly regarded by the French than critics here in America (indeed, the film gets a great deal of attention in Borde and Chaumeton’s seminal work on noir, Panorama du Film Noir Amèricain).

The film was directed by an acclaimed Broadway director named Bretaigne Windust but also features substantial uncredited work by Raoul Walsh (who filled in when Windust fell ill during shooting). It’s difficult to say who the main creative force is here, but I’d point to producer Milton Sperling for assembling the cast and putting the focus on the hard-as-nails script by Martin Rackin. Due credit also has to be given to cinematographer Robert Burks, who gives us an evocative picture but never makes things pretty. Burks would go on to greatness as Alfred Hitchcock’s favorite director of photography, but this film shows him at ease in the hard world of noir.

The Enforcer is a tough little piece of work. It’s not a masterpiece, and no one won an Oscar here, but I’d rather watch it than The African Queen any day.

Nice review! This is one I have to see now.

But, I dunno, Bogey is so damned good as Charlie in 'African Queen.' A weasel who grows into manhood at a late age.

He's great as Charlie! I really like that flick actually, but I've always felt it was just a tad overrated. But hey, that just proves my point: Bogart made so many great movies it's hard to keep track of them all.

I know I'm spouting heresy but I think 'African Queen' was not Katharine Hepburn's best. That's my only quibble with that movie. Bogey was magnificent, but I can imagine Bette Davis and a couple of other actresses in the role of Rosie. I can't imagine anyone but Bogey as Charlie.

I agree that Bogart’s second tier movies are superb or maybe it's just him. Like Harrison Ford today or maybe Jack Nicholson they make the film better by showing up.

Corey, I think you're right that AQ isn't Kate's best, but I always liked her just fine in it. My quibble with that movie is the pacing. It's always struck me as a little slow. What is her best, btw?

David, I agree that those guys can all raise a film to a higher level by their very participation. Then you have those great character actors who always improve a movie. Here's a rule: any movie with Elisha Cook Jr. is worth seeing. I'm not saying the movie will be good, but it'll be worth seeing just to see that crazy little bastard do his bit.

Hepburn's best? Ee-eee... I generally prefer her in the lighter stuff, her dramatic roles (except maybe 'On Golden Pond') always seemed a little over the top to me. Loved her in 'Philadelphia Story,'Adam's Rib,' and such.

Good point about Elisha Cook, Jr. he was far and away the best actor in Kubrick's 'The Killing.'