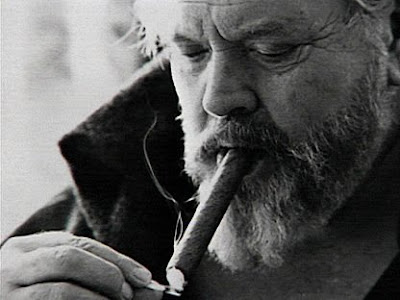 My obsession with Orson Welles seems to know no limit. He's not simply my favorite filmmaker, he's a daily personal fixation. I probably know more about the life and career of Welles than I know about any other single topic except, possibly, my own life. I'm not sure exactly how this happened. My first exposure to Welles occurred late one night when I was a boy and my mother made me watch Citizen Kane on PBS. I remember little of that night except the way Welles' mouth filled the screen as he whispered "Rosebud" and died.

Ah, Citizen Kane. "The Greatest Movie Ever Made." "The Mount Olympus Of Cinema."

That's bullshit, of course (what would it even mean? what definition of TGMEM could be satisfactory?) and no one on earth ever knew that better than Welles himself. Perhaps no other great director is as defined by a single work. This is a tragedy not because Kane isn't a great film--Kane is a joyous, beautiful film, after all--no, the tragedy is that Welles continued to grow as an artist, to experiment and reach. The tragedy is that more than any other director I know, Welles becomes more fascinating the more of his films you see.

He was a constant experimenter, an artist who loved to exist in the moment of creation. I'm reminded of Emily Dickinson here, a poet who wrote her poems on scraps of paper and the back of old letters and lived and died with the knowledge that much of her work might never be read by another human being. Welles began his career on the stage and on radio. He began as a performer who lived for the wild ecstasy of the moment, and something of that always stayed with him. All his films, even the films he made toward the end when he had no money or resources, have an energy and vitality. They pulse with the adrenaline of their maker at the moment of their creation.

These thoughts came to me recently because I stumbled across a video on YouTube, an interview with Welles by an unnamed interviewer. In the interview, the man insults Welles to his face by asking if he thinks his films are "shallow". You can see the controlled fury in the director's eyes. Some context for this clip is important.

There are basically two narratives about the career of Orson Welles. Narrative A says Welles made Citizen Kane and then slid into a forty-five year decline of waste and failure. Narrative B says Welles stayed in Hollywood as long as he could, then moved to Europe and became an independent filmmaker of increasing skill and accomplishment.

Narrative B has the virtue of actually taking into account the career of Welles after Kane. By my count, Welles made five masterpieces: Citizen Kane, The Trial, Touch of Evil, Chimes At Midnight, and F for Fake. You might also include the beautiful and butchered The Magnificent Ambersons, which is the cinematic equivalent of the Venus de Milo. The Immortal Story is excellent, and while the butchered The Lady From Shanghai isn't a masterpiece it's still a lot of fun, as are The Stranger, Othello, and Macbeth. Mr. Arkadin isn't a good movie, but it's an interesting failure.

Watching this YouTube interview you can see what it was like for Welles to try to labor under the burden of Narrative A. Curiously, it looks as if the interview is taking place on the set of Chimes At Midnight. Think about that. Welles is in the middle of making perhaps his best movie, perhaps the best Shakespearean adaption ever, and some asshole is asking him if he's shallow.

And here is the best response to the charge of shallowness: the Chartres sequence in F For Fake. If this isn't profound, then cinema has never produced anything worthy of the description.
at 12:23 PM