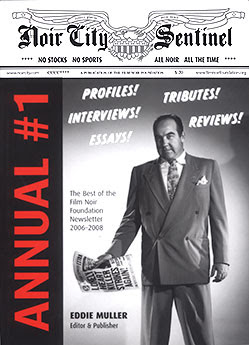 I've written before about the Film Noir Foundation, the nonprofit organization committed to rescuing and restoring the great noir films of the classic period. It's a wonderful organization that is responsible for the popular Noir City film festivals, including the DC festival I wrote about last November. Even more importantly, the FNF has funded or partnered in the rescue and restoration of films like Farrow's Night Has A Thousand Eyes, Byron Haskin's I Walk Alone, and Losey's indispensable masterpiece The Prowler.

The FNF also publishes a terrific electronic magazine on all things noir called Noir City Sentinel. The Sentinel features articles by a host of talented writers, including Megan Abbot, Don Malcolm, Eric Beetner, Vince Keenan, Marc Svetov, and Eddie Muller. Recent issues have featured articles on Robert Siodmak, John Farrow, "Gothic Noir", "Radio Noir", character actors like Don Beddo and Thomas Gomez, an extensive tribute to Ann Savage, and much much more. Your humble correspondent has published a few extended essays in the Sentinel, including a ranking of noir's best brawls (expanded here), a look at the ironic use of tacked-on happy endings, and a discussion of noir's religious undercurrents.

The Noir City Sentinel is available for subscription here. Kick in a little cash, get a great magazine, support a fabulous organization doing essential work. It's a win-win situation.

You can also order a copy of Noir City Sentinel Annual #1, an anthology from the Sentinel's first three years as a bimonthly newsletter.
at 10:24 AM