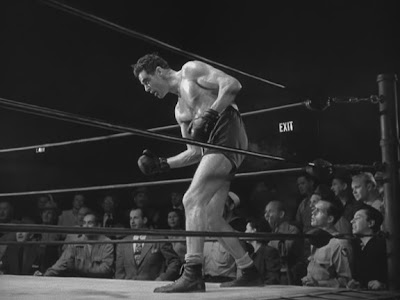 (note: an earlier version of this article appeared in the Noir City Sentinel, which you can subscribe to by becoming a member of the Film Noir Foundation. For more information of the FNF, click here)

Hollywood doesn’t make fight scenes like it used to, however odd that may sound in the age of CGI and advanced stunt work. Today’s blockbusters may spend millions on martial arts choreography and fiery set pieces, but often the action lapses into redundancy and mindlessness. The newest trend is to edit action scenes so quickly that watching them feels like staring into a strobe light.

There’s a lot to be said for a fight that takes place for a reason, between two guys (or three) messing up their suits and Brylcream, thrown together in cramped quarters in the sudden violence of a moment. When these slugfests occur in noir, there’s usually a motivation: one guy has loved another guy’s wife, or a criminal has decided a witness can be silenced, or a normal man finds himself eyeball to eyeball with a psychopath. Whatever the reason, the genre has had more than its share of notable brawls. Here’s a ringside seat to some of the most memorable:

10. Gene Nelson Vs. Timothy Carey in Crime Wave (1954)-This one’s short and sweet, but the sheer weirdness of Timothy Carey earns it a nod of recognition. Psycho Carey is trying to kill Phyllis Kirk when her husband Nelson busts in. The two men briefly tussle before taking a spill down a flight of stairs. The priceless part is watching perennial nutjob Carey leap into action. This guy even fights weird. (for my review of the movie click here)

9. Dana Andrews Vs. Craig Stevens inWhere The Sidewalk Ends (1950)-Another short brawl, but this one’s notable for a couple of reasons. For one, badass cop Dana Andrews gets to hand it to hood Stevens. Note to hoods: don’t sucker punch Dana Andrews. The other reason this tussle stands out is that it has repercussions. It’s after the fight goes bad that all hell breaks lose, so the outcome of this unexpected little altercation determines the course of the rest of the movie.

8. John Garfield Vs. Victor Sen Yung in The Breaking Point (1950)-Tough guy John Garfield was in more than his share of onscreen scraps, but the most desperate came aboard a fishing boat off the coast of Mexico in the middle of the night. Down on his luck, boat captain Garfield has decided to take a job sneaking some illegal immigrants across international waters under the nose of the Coast guard. When the gangster in charge of the operation, Victor Se Yung, tries to renegotiate the payment at the point of a gun, all hell breaks lose. Director Michael Curtiz was a master of action, and this was the most intimate fight he ever filmed.

7. Charlton Heston Vs. A Roomful of Punks in Touch Of Evil (1958)- Orson Welles was never a great physical actor himself, but the man could direct an action scene when he felt like it. He redefined battle scenes in Chimes At Midnight, and in Touch Of Evil he unleashed one of the great barroom brawls. Pissed off cop and worried husband Charlton Heston is franticly looking for his missing wife when his search leads him to a border town strip joint. He is unwilling to accept “We don’t know where she is” for an answer and proceeds to take the place apart in a storm of ass-kicking. It’s Heston versus a roomful of younger men. Guess who wins.

6. Steve Cochran Vs. King Donovan in Private Hell 36 (1954)-Director Don Siegel and writers/producers Ida Lupino and Collier Young kick off their 1954 bad cop drama with an almost comically destructive brawl in a drugstore. Still-honest policeman Cochran jumps a couple of punks trying to make a late night score. He shoots one and tussles with the other, in the process laying waste to the entire establishment. By the time they crash out into the street, there’s not much left to destroy. The proprietor of the drugstore might understandably wish he had just lost the night’s cash register receipts.

5. Dennis O’Keefe (with assistance from Marsha Hunt) Vs. John Ireland and Tom Fadden in Raw Deal (1948)-The seemingly messy three-man melee in the back of Grimshaw’s Taxidermy is another of Anthony Mann’s deftly choreographed and psychologically rich pieces of film violence. Once he had positioned his subtly moving camera under chairs or in closets, the director loved to slam the action around a room and then have it crash down as close as possible to the lens. You might dock the scene a point or two for having Marsha Hunt stand by too long as a frightened spectator, but she comes through at the end, delivering the coup de grace to Ireland and sealing her love for O’Keefe.

4. John Payne Vs. Neville Brand and Lee Van Cleef in Kansas City Confidential (1952)- Here’s an irony: John Payne might have been a pretty boy singer early on in his career, but in film noir he became a human punching bag. His three-film collaboration with director Phil Karlson is an extended study in the fine art of thumping skulls. Payne’s cinematic pugilism got off to a good start in Kansas City Confidential. The film is packed with action, but for sheer sweaty intensity there’s no topping his three-way brawl with thug king Neville Brand and rat-faced Lee Van Cleef. Payne comes out on the losing end of this one, but he would live to fight another day.

3. John Payne Vs. Jack Lambert in 99 River Street (1953)- Payne’s second film with Karlson, 99 River Street, is their masterpiece of brutality, a veritable cornucopia of beatings, slappings and bare-knuckle fisticuffs. The best fight in the film is a down and dirty number in an apartment between boxer-turned cabbie Payne and a gun-wielding thug played by Jack Lambert. Payne takes a beating in the early rounds, but by the end he’s turned Lambert’s face into tenderized meat. A great fight in an underrated film. (for my review of the film click here)

2. Charles McGraw Vs. David Clarke in The Narrow Margin (1952)-Close quarters fisticuffs rarely got closer than this scrap between cop and crook in the men’s lavatory of a moving train. Director Richard Fleischer uses a handheld camera and no stunt doubles as McGraw and Clarke beat each other senseless. The most impressive thing about the scene is how much movement it packs into a room that’s no more than eight feet wide. Fleischer has his actors utilize every inch of the space, but most importantly he plunges his camera into the action until it’s almost a participant in the fight. The camera hurls itself forward, rolls around on the floor with the actors, and even takes a couple of licks. This might be the most famous fight in noir.

1. Robert Ryan Vs. Hal Baylor in The Set-Up (1949)-The best fight on record has to be the bout between aging, down-on-his-luck boxer Robert Ryan and the much younger Hal Baylor in Robert Wise’s masterpiece The Set-Up. The fight has been fixed, but no one’s told Ryan he’s supposed to take the fall. When he starts to win, we start to worry because there’s a gangster sitting in the audience who thinks he’s been double crossed. The tension pulls us two ways. We want this broken down boxer to redeem himself against the young upstart, but we also want him to lose, to spare himself the gangster’s wrath. The bout lasts much of the film—which famously unfolds in more or less real time—and it is an exquisite piece of work. Wise was always a strong director of action and here he was working with two real fighters: Ryan held a college championship and Baylor was the California Heavyweight Champion. Together, the three of them created what is probably the best fight scene of the classic period of film.

I love film fights. Thanks for posting these.

"Kansas City Confidential" has been on my "to see' list for far too long. Time to finally do something about it.

Thanks for the list - it's quite something! Now you're making me want to go back and rewatch all the movies.

All these fights are good, but the Karlton/Payne movies are nirvanas of ass-kicking.