Why Do We Need A Remake of I Walked With A Zombie? 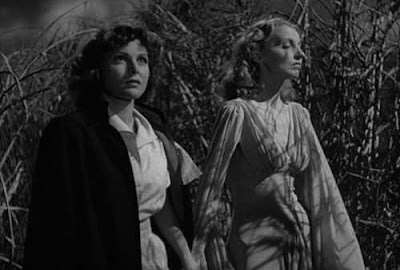 If you are part of the small but devoted cult who worships at the altar of Jacques Tourneur's 1943 I Walked With A Zombie you will probably be aghast to learn that RKO and Twisted Pictures (the people who gave the world the Saw movies) are planning a remake of the film to be directed by Adam Marcus, director of Jason Goes To Hell: The Final Friday. That's assuming, of course, that you're not a big Adam Marcus fan.

In all fairness to Mr. Marcus, I haven't seen his Jason movie because I assume it's a piece of shit. I could be wrong. I will freely admit that I do not know what I'm talking about when I talk about Friday 13th movies.

I am, however, a fan of I Walked With A Zombie. If you've never heard of this movie, the title will confuse you into thinking it's a conventional horror movie (which was, after all, the exact purpose of that title). In reality, the film is a reworking of the Jane Eyre story. A young woman (Frances Dee) is hired to travel by boat down to a Caribbean island to act as a nurse maid for the catatonic wife of a rich plantation owner. Once she gets there, she is drawn into two unfolding mysteries. The first is the family drama surrounding the plantation owner, his lush of a brother, his stern mother, and his catatonic wife. The wife is, of course, the second mystery--a frighteningly beautiful woman who never sleeps but never speaks or responds to anyone. What has happened to her? Do the people of the island know something about her? And what takes place off beyond the cane fields, where on windy nights the nurse can hear the faint sound of drums?

I Walked With A Zombie is a film about mystery, mystery in the deepest sense of the word. It's a film that is very much of its time--especially in its racial attitudes--but its presentation of ethnocentrism is part of what makes it fascinating. Here is a film from 1943 that postulates, however problematically, that white middle American culture might not have all the answers. It handles these issues with a great deal of atmosphere. I Walked With A Zombie was the second of three brilliant horror films Tourneur made for producer Val Lewton (the others were Cat People in 1942 and The Leopard Man). These were horror films that depended on mood and insinuation, that played with the contrasts between light and darkness, between sound and silence. In that sense, they are better thought of as Gothic dramas rather than straight horror films.

That is a distinction I fear will be lost in the remake. We'll have to wait and see, I suppose. In the meantime, I Walked With A Zombie is available on DVD, and it should be sought out. With this movie, Lewton and Tourneur made something that is tantalizingly close to being a horror noir.
at 2:55 PM

I saw this on a list of upcoming remakes and severely lost faith in the world around me. But maybe I'm just being narrow minded.