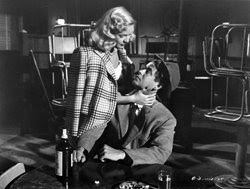 First things first: Janis Carter was unbelievably beautiful. Even among the breathtaking blondes who populate so many noirs, she was something special. Lustrous hair, high cheekbones, a great figure. She was a knockout. She was also one of the sickest dames who ever mixed up a dopey guy and sent him plummeting toward his doom.

In Framed, Carter plays a waitress named Paula. She’s having an affair with a married bank official named Steve Price (Barry Sullivan) and together they’ve cooked up a scheme to embezzle a quarter of a million dollars from his bank and then fake his death. The only thing they need is a fall guy, a warm body to stick in a burning car while they skip town under the cover of night. They get their fall guy when a broke mining engineer named Mike Lambert (Glenn Ford) shows up in town.

Working from a story by John Patrick, crackerjack screenwriter Ben Maddow (The Asphalt Jungle) lays on thick the twists and turns of the plot, so I won’t say much more about the way events play out. However, I will say that what is impressive about the screenplay is the way it proceeds through its complications without losing us. We know more than Mike knows, and we know more than Steve knows, but none of us know as much as Paula. Like any self-respecting femme fatale she’s pulling the strings on those around her and she’s pulling the strings on the audience as well. While Mike is struggling to find a job and make sense of the gorgeous waitress who seems to have too much disposable income, Steve is plotting embezzlement and murder with her. Paula, however, is operating out of a sense of selfishness that’s impenetrable and seemingly limitless.

The cast is great. Glenn Ford was always a good fit for the role of a seemingly normal guy with rage boiling inside. There’s something just a little off about him, a grumpy discontent that belies that decent, working man’s face. He’s contrasted nicely here with Barry Sullivan who exudes his normal smarminess and high self-regard as Price. This guy thinks he knows what’s going to happen next, but he doesn’t have Paula quite figured out.

That’s understandable, of course, given that she’s played by Janis Carter. Carter only had a short career in films before she retired to become a socialite in the mid-fifties, but during her brief time in the city of sin she etched out a notable place among the bad girls. While some femme fatales are misunderstood, even sympathetic, Carter excelled at playing women who seem twisted, maybe even perverted. Late in Framed, she commits a brutal murder, but watch her as she’s disposing of the body and you’ll notice there’s a little smile that creeps onto her face, a rush at being this bad. It can’t help but remind you of her brilliant turn as the deranged femme in Night Editor. Paula is a little more sane than that character—which isn’t difficult since that character was totally nuts—but she’s still a nasty piece of business. Carter can put this kind of unbalanced wacko across because she has charm to burn. She isn’t just good looking; she has a charisma that pulls you in—usually at your own peril.

In most films the script problems tend to occur in the last act, and it must be said that Framed makes some dubious moves in its final twenty minutes. A murder takes place and the suspicion falls on an old prospector (Edgar Buchanan, a man born to play old prospectors), but Mike knows the old guy didn’t do it and sets out to prove his innocence. At this point, the screenplay starts to panic a little and the implausibilities start piling up in order to bring the story to a conclusion (after you watch it, ask yourself how Ford managed to get into the bank at the end when every cop in town is looking for him). Just when the plot should be going into overdrive, it shifts gears and more or less coasts to a close.

So Framed isn’t perfect, but it is a terrific entertainment and a strong addition to the femme fatale roll call. Director Richard Wallace follows the strengths of the script and turns his cinematographer Burnett Guffey (In A Lonely Place, Human Desire) loose to do some typically excellent night shooting. Most of all, he lets Janis Carter do her thing.

That counts as a masterstroke.

Wow, you've got me drooling to see this pic.