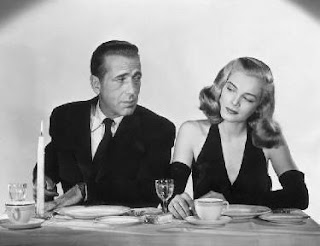 God, this movie is a miserable piece of shit.
DEAD RECKONING is so profoundly bad that it may take multiple viewings for all its badness to sink in, but I would not suggest you subject yourself to repeated viewings just to grasp how deeply it sucks. It may be worth seeing once, however, if just to know how low the genre can go.

Oddly enough, on paper, DEAD RECKONING sounds promising: it stars two of noir's greatest icons, Humphrey Bogart and Lizabeth Scott. It’s directed by John Cromwell, director of the brilliant CAGED. And the plot isn’t terrible: Bogart plays an Army captain just back from the war who is trying to solve the murder of his best friend. His search leads him to a sexy nightclub singer played by Scott. It also leads him to the sleazy owner of the nightclub (Morris Carnovsky) and a psychopathic goon played by Marvin Miller.

With those elements the movie should be good, so why it is so awful? Well, for starters, it never gets beyond the point of being a cobbled together mess of elements. The whole movie is warmed over Bogie highlights stolen without much skill from John Huston and Howard Hawks. As more than one fan of THE MALTESE FALCON has noted, DEAD RECKONING lifts entire passages out of that movie’s dialog (FALCON: “When a man’s partner is killed, he’s supposed to do something about it.” DR: “When a guy’s pal is killed, he ought to do something about it.”). It’s discomforting to catch Bogart attempting to be Bogart. At his best, there was no greater movie star, but Bogart could be shockingly lazy. He’s being really lazy here, rehashing old lines in bad copies of old scenes. He never really let go of this laziness, and throughout the rest of his career, he would alternate fresh triumphs like IN A LONELY PLACE with banal CASABLANCA-knockoffs like TOKYO JOE. His tendency to cannibalize his past successes began with this film.

Part of his problem here was that he just didn’t like Lizabeth Scott. At the time this picture was made, she was being billed by producer Hal B. Wallis as “The Threat”—or, as you might also put it, the “new” Lauren Bacall. Since Bogart had just married the old Lauren Bacall, it’s doubtful he was very interested in helping along Scott’s career.

Which leads us to the big problem with the film, the overriding problem which transforms it from being merely a cheap FALCON rip-off and turns it into something truly repellent. This is one of the most misogynistic movies ever made. If DEAD RECKONING has a theme, the theme is this: women are no goddamn good. It’s not just that Bogart makes a monotonous series of allusions to “babes” and “dolls” and treats every woman on screen like a slave on an auction block (he shuts the door of a phone booth in one woman’s face, and then cracks, “Sorry, gorgeous, I didn’t see what you looked like”). His dialog goes beyond chauvinism or objectification. This character is obsessively fixated on demeaning women. Besides the plot, it’s pretty much all he talks about. The low point comes when Bogart is given a long, creepy monologue wherein he relates his fantasy of shrinking a woman down and sticking her in his pocket to keep her quiet until he’s ready to have sex with her. It’s impossible to watch this scene without squirming. It is the nadir of the Bogart persona.

Tellingly, DEAD RECKONING is a movie populated almost entirely by men. Except for a brief appearance by Ruby Dandridge as a housekeeper, Lizabeth Scott has the only female speaking part in the film. This means that all of the film’s bile is directed at her. Scott responds by giving probably the worst performance of her career. By all reports, she didn’t like Bogart any more than he liked her, and the only time she seems to wake up in the film is at the end when she tries to kill him. What is sad about all of this, of course, is that Lizabeth Scott is one of the truly great women of film noir, yet because of Bogart’s star power, it’s a pretty safe bet that most people will see her for the first time in this movie. That’s a shame, and such viewers are urged to make haste to a copy of PITFALL or TOO LATE FOR TEARS or STOLEN FACE. Hell, even DESERT FURY.

The final point to make about DEAD RECKONING is to note how its misogyny grows out of its laziness. Someone involved in this movie obviously watched THE MALTESE FALCON and noted how tersely Bogart treats Mary Astor. What they failed to realize was that a) Bogart treats everyone in that movie tersely, b) his terseness is a defensive mechanism, and c) he isn’t mean to Mary Astor because she’s a woman, he’s mean to her in spite of it. That’s what makes him great. He can’t be swayed by feminine wiles any more than he can be frightened by goons with guns. Someone on DEAD RECKONING confused that stoicism with a contempt for women as blatant as an open sewer.
at 8:17 PM

To demonstrate how totally inept Jake Hinkson is at recognizing a great movie like “ Dead Reckoning “ with ALL of it’s great elements he has only a blog, something anyone can have, to spew his un intelligence through. Hinkson thinks “ Robin Hood” 2018 and Scorsese’s “ The Irishman” are what’s good! Simone