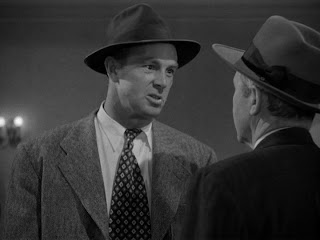 What makes Crime Wave a movie to cherish is the texture of the thing. Director Andre De Toth shot most of the movie on locations in Los Angles and populated his screen with a cast of great faces. His cinematographer Bert Glennon was an old pro, a favorite of John Ford and Josef Von Sternberg, but this cheap crime thriller is Glennon’s crowning achievement, a visual masterpiece that melds the atmosphere of chiaroscuro with the starkness of neorealism. Everything here works, and the look of the film is complimented by the use of audio grabbed on location by the sound team of Stanley Jones. If you’ve never seen Crime Wave, you’ve never seen a movie that looks, sounds, feels more like a film noir.

The film tells a fairly simple story. Three hoods bust out of jail, knock over a gas station, and kill a cop. One of them takes a bullet in the process, so the other two shove a wad of money in his pocket and send him off to get some help. The wounded man crashes in on an ex-con he knows, Steve Lacey, and drops dead. This is bad for Lacey. The cop investigating the robbery/homicide is hardnosed Detective Lt. Sims, and he thinks Lacey is mixed in with the crooks. Worse, the other two crooks show back up. They expect Lacey to help them knock over a bank and make their escape, and they’re no more interested than Sims in hearing that Lacey’s gone straight.

That’s the plot, such as it is. The film’s main flaw is that this storyline fails to ever really incite a great emotional response from the viewer. None of the characters are particularly well-developed, and while Lacey and his wife Ellen (played by Gene Nelson and Phyllis Kirk) are the ostensible heroes of the story, it’s impossible to ever care too much about their predicament. Their scenes together have a somewhat clunky quality.

But look at me spending four sentences describing the flaws of a movie this good. Nelson and Kirk have some unconvincing dialog, it’s true, but they both give strong performances as the only normal people in the movie. More importantly, the plot is dominated by the other characters, none of whom lay any claim to being normal. The two hoods who return to terrorize the Laceys are mastermind Doc Penny (Ted de Corsia) and his brawny henchman Ben Hastings (played by a young Charles Bronson, still working under the name Charles Buchinsky). These guys are terrific. De Corsia is one of my favorite noir thugs, a man who seems to have been born with a sneer and a head full of pomade. He’s a consummate performer, a man whose every line reading makes me smile. Bronson, on the other hand, has always been a performer who has underwhelmed me, but here he’s terrific. With a leering smile and biceps the size of chopped hams, he pushes Steve around and sizes up Ellen like she’s dinner. Filling out the bad guy roster, in two nice character parts, are a drunken doctor played by the great Jay Novello, and a violent oddball played by everyone’s favorite oddball, Timothy Carey.

The crooks are great, but the movie is dominated by Sterling Hayden as Lt. Detective Sims. Hayden was an amazing actor, a barking hulk of a man incapable of projecting subtext. A looming presence, all six foot five of him, he had a way spitting out dialog like he was just happy to get it out of his mouth (which he probably was; he hated acting). Somehow this all worked to his advantage because there was an integrity to his complete lack of affect. Playing a crook, he seemed like a simple-minded thug. Playing a cop, he seemed like a simple-minded lawman. When I mentioned texture earlier, I was thinking, in part, of Hayden’s face, his voice, his glower and gait. Here he fits in so well with the grain of the picture he seems like one of the pieces of local architecture.

Which brings me back to texture. Crime Wave is a gorgeous film from beginning to end. Some of the scenes look and sound as if they have been lifted out of neorealism. Watch the scenes in the Homicide Bureau, with Hayden reading reports and briefing his cops. These scenes were shot on location, and I doubt very much that a newsreel of the same thing would have looked or sounded much different. Yet these hyper-realistic scenes are blended seamlessly with the expressionist glory of a sequence like the one in which Bronson kills the drunken doctor and then escapes over a back wall and into the night. The bichromatic beauty of these images, with their white etched onto black minimalist audacity, creates a dreamlike aura. By blending this expressionism with the documentary realism, De Toth and Glennon create an aesthetic that is the encapsulation of what film noir is all about: a dream that feels more real than reality.

Here's an interesting interview with Hayden. I think you get a sense of what a character this guy was.

And here's a good interview with Andre De Toth, Crime Wave's director. In addition to this film he also made the masterpiece noir Pitfall. He discusses both films here.

Just wanted to add that the Noir Collection DVD of this had comentary by Eddie Muller and.... James Ellroy... what they have to say about the film is better than the film on it's own.

The film by itself is pretty great, but the commentary by Muller and Ellroy is absolutely terrific.