One More Word For Melissa Leo and Frozen River 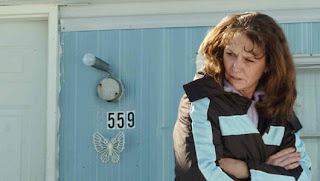 In a previous post, I gave a shout out to a wonderful film called Frozen River. It's small production, shot on a shoestring budget, starring Melissa Leo as a poor woman who starts sneaking illegal immigrants across the US/Canada border in the trunk of her car. It's a tremendous film with a touching and heroic performance by Leo.

Now Melissa Leo has been nominated for an Oscar. My attitude toward the Oscars is an apathy for the award itself, soured by a contempt for the pomp surrounding it. Having said that, however, one good benefit of the publicity of the awards shows is the attention it brings to a movie like Frozen River.

Roger Ebert has a little write up on his website about Leo's nomination. In it, he says that the films will be rereleased in theaters. If it opens near you, I highly recommend you check it out. It's a moving and exciting piece of work.

Here's a link to Ebert's original review of the film.
at 6:16 PM