Condemned: An Interview with Oren Shai 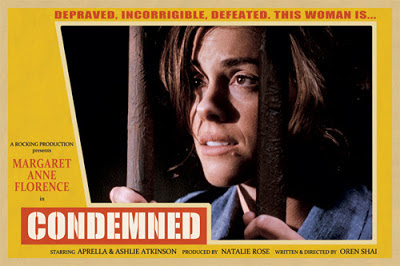 Oren Shai is an Israeli-born filmmaker living in Los Angeles. His short film CONDEMNED was recently screened at NOIRCON 2012 in Philadelphia. USA Today called the movie a “fun, haunting 14-minute flick” and that’s a pretty apt description. It stars Margaret Anne Florence as #1031, an inmate who fears she’s about to be killed inside an unnamed women’s prison. A stylish mood piece, the movie has the feel of a classic Women-In-Prison noir funneled through a postmodern sensibility. Although it’s a dark film (a bleak film, even), it’s got a nice gallows sense of humor.

I talked to Shai recently about his film. We discussed the evolution of the project and we geeked out on a shared love of Eleanor Parker and Jan Sterling. Read our discussion below, then be sure to click on the link and check out the movie for yourself.

Jake Hinkson: How did CONDEMNED come about?

Oren Shai: The idea of making a Women-in-Prison film came to me a few years before working on CONDEMNED, after I watched Jess Franco's 99 WOMEN. That got me on a genre kick that tracked all the way back to Cecil B. DeMille. For about a year I worked on developing a script for a feature WIP film with Roy Frumkes (STREET TRASH, THE SUBSTITUTE), but that ended up too expensive to realistically get off the ground.

Later on, I started working on a Master's in Individualized Studies (as in, choose your own adventure), and during my first summer, frustrated at how much time had past since my last short, I wrote CONDEMNED. Before the summer was over, and thanks to a really amazing crew, the film was in the can. I ended up taking advantage of the momentum and wrote my whole thesis about the history of the genre.

JH: How long did it actually take to write CONDEMNED? Did you always conceive of it as a one-set film?

OS: It couldn’t have taken over a week to complete a first draft, being so short, and it had been simmering in me for quite a while. I did conceive it as a one-set piece, so that I could keep the visual integrity of what I aspired to achieve and still be doable on a production-level. One of the determining factors in setting-out to make it was discussing the prospect of building a jail-cell with my production designers – who confirmed they could do it and ended up exceeding my already high expectations.

JH: One thing I really like about this film is that while it seems to be both totally aware of the Women-In-Prison genre, it actually doesn't contain a single clichéd moment. It's as if you're using the characteristics of the WIP flick, but you're avoiding a simple rehash of the genre. Was that a conscious choice?

OS: Absolutely. The last thing I wanted to do was make a throwback film. Clichés are overused conventions, and since this genre is effectively a dead one, if the film corresponded with narrative conventions that don't exist anymore it wouldn't appeal to anyone but its avid fans. I strive to work within a genre rather than look at its form - which means you need to reinterpret it in order to create a new experience for modern viewers.

If you distill all other elements, at the heart of this genre is a sense of desperation unique to the female experience. Male-prison films primarily deal with escape and individuality. The women had no hope for either. The early movies presented conforming to domesticity - another form of oppression - as the only solution for the criminal woman. In 1950, CAGED changed that to a tone of complete desperation - a system that punishes the criminal and corrupts the innocent. This theme was the main thing I worked around, for which I thought the visual language of Noir was befitting.

JH: Margaret Anne Florence is terrific as #1031. What kind of discussions did you have about the character?

OS: Margaret Anne was a godsend. We were about a week before the shoot without anyone cast as #1031. I was very close to calling the whole thing off. A good friend referred me to her in the nick of time.

I'm not sure I recall the specifics of our pre-filming discussions, but I tend to talk at length with actors about who the character is and make sense of anything that might not. Margaret Anne was dead-on. She has an innocent flair in her eyes that cries out from within the darkness. I found myself so mesmerized by her performance that many times I wouldn't yell cut, just to roll more film on it.

I also showed her CAGED, because Eleanor Parker was a big inspiration for her character. Hell, I showed it to everyone, it's the best Women-in-Prison film ever made.

JH: I totally agree. CAGED is a masterpiece, and it should be on any short list of the best noirs ever made. Part of what makes it so great is the way Parker transforms over the course of the film from timid victim to hardass convict—it’s as good a performance, frankly, as I’ve ever seen in a movie. In CONDEMNED, #1031’s transformation seems to be a similar kind of embracing of destiny and doom, though hers feels more like a disintegration. Her last line—“If you see the devil, tell him I’m comin’”—seems like a kind of surrender. Did you think of it that way? Did Margaret Anne approach it that way?

OS: Have you ever seen SO YOUNG SO BAD? It’s basically CAGED in a reformatory school. Considering they were made the same year, it’s amazing to see how similar they are. It’s a little more forgiving than CAGED (unconvincingly so), but pretty powerful, with one of the most brutal “hosing” scenes I’ve seen in those films. It shouldn’t be as obscure as it is.

As for #1031, you’re exactly on spot. It’s a mental and emotional disintegration that results in giving up. In accepting, maybe even welcoming, a destiny she’s too tired to fight. Whether this is caused by the actual events or her own twisted psyche, I left for Margaret Anne to choose for herself. The truth is vague, I’d like for the viewers to make up their own mind.

JH: I love how artificial the film feels. I'm thinking in particular about the prisoners' uniforms, which look like something Jan Sterling would have worn in the fifties in something like WOMEN’S PRISON (1955). Why did you go for that aesthetic?

OS: Jan Sterling is so good, between her and Ida Lupino I really wish WOMEN'S PRISON was a better movie.

JH: Yeah, there’s a lot of good stuff in that film, despite some pretty big flaws. I do love that in your film you give the Night Guard one of Sterling’s best quips, “You won’t like it here at first, but once you get used to it you’ll really hate it.” A fun homage for the noir geeks.

OS: Oh yeah, it seemed appropriate to have that line said to Laura, since she is somewhat inspired by the Jan Sterling-type. Even though it’s imperative not to let film references overshadow the story, there’s something satisfying talking to people who recognize them.

But yes, the aesthetic was very much influenced by the 1950s cycle of films, and also by the cover art of the era's paperbacks. In particular Robert Maguire's artwork for Vincent G. Burns' FEMALE CONVICT. I wanted CONDEMNED to feel like a cinematic companion to the experience of holding an old paperback. On one hand, highly-stylized, on the other, kind of gritty, with pages disintegrating in your hands.

I don't know that I'd define artificial as my intention, but I do tend to avoid realism. As a filmmaker, realism doesn't particularly interest me (although it could as a viewer). Almost every classic Hollywood genre dabbles in heightening realism, whether in lighting, acting style, art direction, etc. They all have a certain artificialness that is a part of their DNA. As a director whose passion lies in genre filmmaking, I suppose I like to create a world and use its aesthetic as language to assist its emotional impact.

JH: I saw some interview with Sam Fuller one time where he said “Reality is a bunch of bullshit.” His point being, I think, that “reality” in film (or art or literature) is as much a constructed thing, as much an aesthetic manipulation, as anything else. CONDEMNED has the feel you mention—stylized yet gritty, which is a pretty good way to encapsulate “film noir” into a single phrase. What kind of conversations did you have with your production team about this?

OS: Fuller said it better than me, then.

The conversations are generally about the aesthetic, the atmosphere, its meaning for the character, and how to implement it visually. We looked at references ranging from the era’s genre films, to still photography, to the paperbacks and artwork from Men’s Adventure magazines. It’s important to me that everybody’s on the same page, forgetting about contemporary notions of realism – for example, if a light scheme fits the emotional motivation, its practical motivation (where it is coming from) isn’t all that crucial. Ryan, my cinematographer, shot my previous film as well (HEAVY SOUL), and we have a pretty good rapport when it comes to that. We also shot on Super 16mm. The film grain adds to the “grit” naturally in a way that no post-effect could emulate.