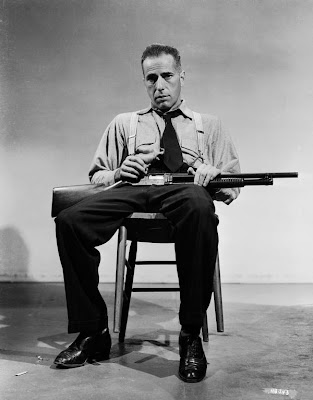 Consider for a moment the following list of films:


I would submit that this collection of films represents the single best run of performances by a male actor in the history of films. I love Jimmy Stewart, Cary Grant, and Robert Mitchum--each had legendary careers. But no one compiled a list of accomplishments like the one above.

Bogart had the good fortune to work with several top notch talents in their prime, an incomplete list of which would include Howard Hawks, Nicholas Ray, Michael Curtiz, the Epstein Brothers, Claude Rains, Ingrid Bergman, Nicholas Ray, Gloria Grahame, soul mate Lauren Bacall, and, of course, John Huston. Most importantly, however, Bogart managed to work with these people on A+ material. As if to prove how fickle greatness can be, he also worked with some of these same folks on crap as well (He, Rains and Curtiz followed up Casablanca with the forgettable Passage to Marseilles, for example), but the exceptions only demonstrate how hard it is to make a good movie, let alone a masterpiece. The best plan is to work hard and have good luck.

I discovered Bogart in high school and never again had to fake an interest in sports or cars. I was born again as a movie geek. The discovery of Bogart leads one deep into the mystery of cinema simply because he happened to be there a) at the center of Hollywood's Golden Age, and b) at the outset of its Noir Age. He's the pivotal figure in the overlap between the dream factory and it's postwar transformation into something darker. He died right about the time the studio system died.

He's one of the great noir actors--his best film is one of the greatest noirs of all, In a Lonely Place--but he was too heroic to really embody the noir ethos. For that you need Robert Mitchum. Bogart wouldn't play the sap for anyone. Mitchum had sap tattooed across his big handsome forehead. Michum, in other words, was an antihero.

Bogart was a hero in an antihero's trench coat. The Maltese Falcon and The Big Sleep and Casablanca aren't just great movies, they're instruction for how to live a life of integrity and style. That Bogart didn't always live up to these principals in real life is as ultimately inconsequential as John Wayne's dodging military service. As human beings, they made mistakes and fell short. As actors, their job was to act. Make us laugh or cry or cringe or--this is the tough one--make us aspire to a certain code of behavior.

He explored his dark side in films like In A Lonely Place, The Two Mrs. Carrolls and The Treasure of Sierra Madre, but he was first and foremost "Bogie" a figure as heroic and iconic as John Wayne or Gary Cooper. He was more urban than Wayne or Cooper, more gritty than Cary Grant. He fit, in many ways, Chandler's conception of the character of Philip Marlowe (whom he played in The Big Sleep) the tarnished white knight.

As I mentioned before, Bogie made his share of bad films. Many people I respect will defend Dead Reckoning, but I consider it perhaps Bogart's worst film (and, yes, I'm counting the one where he's a fighter pilot, the one where he does judo and the one where he's a vampire). Often he gave good performances in mediocre films. 1954's The Caine Mutiny is overlong and dull, but Bogie's terrific as the cowardly Captain Queeg. Likewise, his breakout film, 1936's The Petrified Forrest, is a sluggish speechfest starring Bette Davis and Leslie Howard, but the second Bogart turns up as a gangster on the lam he becomes the focus of every scene.
Every hardcore movie geek has their favorite B-list Bogart movie. The whole world loves Casablanca, but what separates the casual fan from the obsessive is knowing that The Enforcer is an underappreciated gem or knowing that Bogie is particularly good in the little seen anti-KKK drama Black Legion. My favorite b-list Bogart film, though, might be the WWII flick, Sahara in which he plays the commander of a tank squad in Africa. He and his boys end up having to defend an outpost against, oh, the entire German army. Spoiler: Bogart and his crew win. This is propaganda at its best.

The list goes on and on. An obsession with Bogart is a gift that keeps on giving.
at 4:49 AM

I won't quarrel about it. Bogey's performances are still holding up decades after his death, and after countless viewings. Still my actor of choice for drama, comedy (I love "We're No Angels"), and action.

I will say that behind him, I would list Paul Newman as having the second greatest run.

Good call on Newman. God, did the camera love Paul Newman. He was so beautiful that his craft gets overlooked sometimes. He only got better as he went along. His classic performances in The Hustler, Hud, Hombre, Cool Hand Luke, Butch & Sundance... Amazing. But then you get to his later years and in something like Road to Perdition he is so perfect, so controlled. Newman rules.

Splendid post. Bogart's body of work is amazing. Newman was no slouch, either.

I'm the type of person as such: If a Bogart film is on, I watch it. Same for Newman, Mitchum, Wayne and a few others.

The thing about Bogart, is in no way should he have been that good. The way he talked. Not overly handsome. Yet at the same time, those are things which made him so damn likeable. He was and is, one of those people who just have "it", whatever "it" may be.

I agree, Mike. Bogart had the ability to be the center of every scene, even when he wasn't the star.

The Kid In The Front Row said...

"I discovered Bogart in high school and never again had to fake an interest in sports or cars. I was born again as a movie geek."

I love that. You're awesome.