A Forgotten Masterpiece Restored: TOO LATE FOR TEARS (1949) 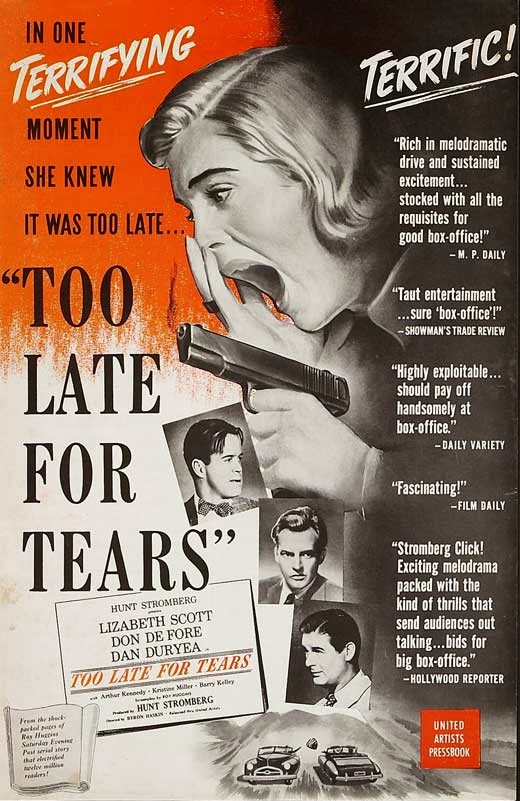 The set up is wonderfully simple. A woman named Jane Palmer and her husband, Alan, are driving home from a party one night when a bag full of money is tossed into their backseat from a passing car. The next day, they discover that the money is the payoff from a botched extortion drop. Alan wants to turn it over to the cops. Jane, alas, does not. That’s going to mean bad things for her husband.

So begins Byron Haskin’s TOO LATE FOR TEARS, one of the greatest—and most overlooked—of all film noirs. It was written by Roy Huggins who is best remembered today as the creator of hugely successful television shows like THE FUGITIVE and THE ROCKFORD FILES but who started his career as a hardboiled crime novelist in the vein of Cain and Chandler. This film, based on his excellent 1947 novel of the same name (first serialized in the SATURDAY EVENING POST), is a movie which has been nearly forgotten, even by many people who consider themselves noir fans. But while the film exists only in ragged prints and grainy DVDs, it remains an essential contribution to the genre.

It’s a femme fatale movie, but before we go further we need to unpack the phrase ‘femme fatale’ a little because femmes come in all shapes and sizes. Some are duplicitous girlfriends. Others are certifiable nutjobs who lure hapless men into their neurotic webs. Sometimes they’re sirens with a taste for married men, and sometimes they’re just bored housewives. What they all have in common is that they’re all bad news.

Jane Palmer (Lizabeth Scott) is definitely bad news but TOO LATE FOR TEARS makes the diabolical suggestion that there might be a femme fatale hiding inside the ostensibly happily married woman. Like DOUBLE INDEMNITY this film sees the married woman—the symbol of fertility and domestication in most American films of the forties and fifties—as a cold blooded murderer lying in wait. Jane Palmer and Phyllis Dietrichson could be sisters.

The truth is, most film noirs are about men. Even most femme fatale movies are told from the point of view of a man who meets a beautiful woman, falls in love (or lust) with her, and then suffers to his last breath. When Walter Neff sizes up Mrs. Dietrichson at the beginning of DOUBLE INDEMNITY, it’s his eyes we’re looking through. But in TOO LATE FOR TEARS we stay mostly with Jane Palmer. When we do leave her point of view, it is to drift momentarily to her suspicious sister-in-law Kathy (Kristine Miller) and Alan’s old army buddy Don (Don DeFore) as they attempt to bring Jane down. This, of course, builds suspense but also paradoxically strengthens our identification with Jane. She’s the smartest person in the movie. We’ve been with her from the beginning. When we eavesdrop on Kathy and Don plotting against her, we want to run off and tell Jane.

This identification with the femme fatale owes a lot to Lizabeth Scott’s performance, which alternates between desperation and cunning, and is perhaps the best one she ever gave. Part of what she brings to the role—and it is something that many iconic noir actresses (like Ann Savage and Marie Windsor) brought to their roles— is a sense of having been disappointed by life.. Scott was originally molded by studio executive Hal B. Wallis to be the new Lauren Bacall (just as Windsor was supposed to be the new Joan Crawford). When that A-list career didn’t materialize, she was relegated to B pictures, playing femme fatales and gangsters’ girlfriends. Something of her disappointment shows in her portrayals of women whose dreams have never come true, and this is especially true in TOO LATE FOR TEARS. No one in the audience could possibly root for her husband Alan (played by Arthur Kennedy as a befuddled bore). This poor sap comes across like a well-meaning prison warden standing guard over all of his wife’s dreams. We don’t yearn for his destruction, but we also don’t hate Liz for wanting to escape. And her escape starts to seem impossible once Ubervillian Dan Duryea shows up looking for his lost luggage.

With the possible exceptions of Kirk Douglas and Richard Widmark, no one ever played a son of a bitch better than Dan Duryea. And Duryea did them both better on one count: his raison d’être was terrorizing women. Inside the insular world of noir, Duryea was a woman’s worst nightmare: a charming, rakish ne’er-do-well who, when the going got tough, got tough with his woman. Duryea made this kind of thing watchable because he oozed sleazy charm and because he always wound up going to hell at the end. In TOO LATE FOR TEARS he turns on both the charm and the hard stuff, but no one slaps around Lizabeth Scott and lives to brag about it.

Ultimately, noir is built upon the themes of transgression and ruination. There is no doubt that Jane Palmer is a transgressor. She’s a thief and a cold-blooded killer. She earns her ruination. And yet the best noirs always find a way to implicate us in the guilt of the protagonist. Jane is eventually brought down by Kathy and Don, but while they’re supposed to represent the forces of normality, we never feel anything for them. Kathy is a bland cipher, and Don’s a smug asshole. We can easily imagine them sitting down with good old Alan for the most boring dinner party in the history of the world. And we can imagine Jane Palmer sitting there with them, suffocating on the inside and yearning for some excitement to drop into her lap.

***
For years TOO LATE FOR TEARS suffered the same fate of other noir classics like DETOUR and QUICKSAND. It was abandoned in the public domain —which means that you can watch this movie right now. Or you can buy one of many DVD copies (here's the best one). What you can’t do is find one in nice condition. This movie was dumped on the market, made ten cents, and then hit the market again as KILLER BAIT. As such it has been kicked around for fifty years, and once something is in the public domain any yokel with a disc burner could sell a copy. That made it impossible to find a copy that wasn’t washed out and covered in scratches. It also made it difficult to raise the funds for a restoration. The folks who pony up cash to refurbish obscure old movies understandably like to have the only product on the market (after all, unsuspecting buyers looking for a deal might buy the five dollar shit-version of the film rather than a decked out thirty dollar version). I remember speaking with Film Noir Foundation president Eddie Muller years ago about this film, and he hinted then that a restoration might be possible in the relatively near future. He knew as well as anyone that the film is indispensable, that it’s the Queen of Noir at her best, and it deserves the royal treatment. That restoration has come to pass, and on January 25 Muller and the Film Noir Foundation crew unveiled the new restored print of this great film. The movie will be on tour this year as the FNF does their annual NOIR CITY retrospectives around the country. Look for it.

One last word on Byron Haskin. A professional who worked in Hollywood as a special effects man, cinematographer, and director, Haskin is a mostly forgotten figure today. When he is remembered it is usually in conjunction with his extensive work in science fiction (he directed WAR OF THE WORLDS in 1952 and worked on the pilot episode of STAR TREK), but his contributions to noir are top rate. In addition to TOO LATE FOR TEARS he directed Liz Scott, Burt Lancaster, and Kirk Douglas in the terrific 1947 I WALK ALONE. He also directed John Payne’s best performance in the political drama THE BOSS in 1956. All these films are worth finding, and Haskin deserves to be remembered.

I have a feeling you'll be a happy man right about this time next year...

Never seen it but it loks great.

And filmed at the Republic Studio with Republic's staff working on the picture; Dale Butts, Howard & Theodore Lydecker, etc, etc.