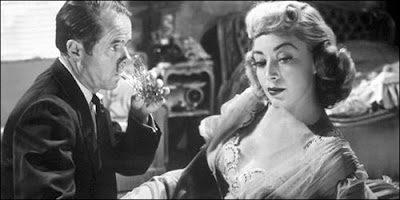 One note to begin: in our time we all play different parts. Just about every noir player has played the hero and the villain, the good girl and the femme fatale, the lead and the support. Yet over a career there are certain personalities that take hold. This is the first entry in a new regular feature of short sketches, a partial list of faces that appear over and over in noir, like thugs pulled into a police lineup:

Marie Windsor-The Black Widow: The worst wife in noir, to be married to her is to be cuckolded and maybe killed. Big-eyed and beautiful with a great laugh and a cold heart, she made a ton of noirs and excelled at nearly every role: from victim (The Sniper) to heroine (The Narrow Margin). She was always at her best, however, as the spouse-from-hell. In films like City That Never Sleeps, Force Of Evil, No Man's Woman and Hell’s Half-Acre she's a nightmare bride--unfaithful, backstabbing, even murderous. Noir is full of bad wives, of course, but Marie made it into an art form. She was the kind of gal who ended up gut-shot more often than not, but while she makes dying look good, she makes marriage look awful.

Windsor is featured in Dark City Dames (a rich irony of this book is that we get a pretty good picture of what a warm and devoted wife Marie Windsor was in real life. She was a hell of an actress and quite a lady.)

She was awesome in The Killing. A great little flick.

Just her name in the cast, you know you need to watch just to see how 'bad' her character will be. Even as a heroine in 'Narrow Margin,' she gave off that rotten-to-the-core vibe.

Smashing. some kind of a woman.