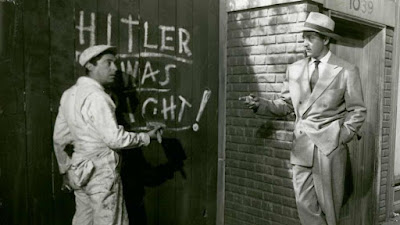 When director John Reinhardt returned from his military service after World War II, he began making films that were different in tone from the kind of movies he’d specialized in before the war. In his early days in Hollywood, Reinhardt had worked in the rather obscure world of foreign film production at big studios like Fox and Paramount, mostly making small Spanish-language comedies and musicals. During the war, Reinhardt had worked for the OSS under the command of John Ford. When he returned to movie making in 1947, however, Reinhardt began toiling in the world of low budget independent productions. His work from that time forward would be darker, suffused with a sense of paranoia, overhung by a deep pessimism.

His 1948 thriller OPEN SECRET is an underrated entry in the run of films dealing with anti-Semitism that were released after the war (and following the revelations of the Nuremberg Trials). Studio pictures like CROSSFIRE and GENTLEMAN’S AGREEMENT had already brought the subject into American movie theaters, but OPEN SECRET, in its low rent way, is a more honest handling of the topic.

The story follows newlyweds Paul and Nancy Lester (John Ireland and Jane Randolph) who have arrived in an unnamed town to visit Ed, Paul’s old Army buddy. When Ed goes missing, Paul and Nancy start poking around. Turns out Ed has some pretty unsavory connections to a gang of white supremacists who operate out of a nearby dive bar called The 19th Hole. Did Ed really fall for neo-Nazi claptrap? How does a local Jewish storeowner named Strauss (George Tyne) figure into this?

Like many of Reinhardt’s independent productions, OPEN SECRET has a quick running time (67 minutes), a notably small budget, and limited sets. Reinhardt uses the constraints to great effect, though, to create a mood of near constant oppression and claustrophobia. The very smallness of the film becomes a reflection of the smallness of the lives of the characters. Consider The 19th Hole. Strauss sarcastically calls it the “local country club.” What it actually is, though, is a dank, dimly lit box where a group of haggard-looking men sit around drinking and blaming the waste of their lives on “foreigners.” Beneath plumes of cigarette smoke they stare into shot glasses and grumble about their shrinking prospects.

If the film demonstrates the best qualities of Reinhardt’s work, it also bears some of his flaws as well. As is almost always the case, his female characters are weak and underdeveloped. Nancy Lester is a watery leading lady who is on hand mostly to wait around for her husband. The character actress Anne O’Neal lurks around corners as Ed’s landlady, but while her presence adds to the claustrophobia of the piece, there’s really nothing to her character besides her lurking. The one moment with a female character that rings true is an effective speech by Helena Dare as the abused wife of one of the gang members wherein she explains that he knocks her around to make himself feel big — tying his domestic abuse to the white male supremacy line his crew promulgates.

In a sense, of course, a film like OPEN SECRET was several years too late. Had this same film been released in 1940 it likely would have been so controversial it would have been the subject of Congressional hearings. After the horrors of Auschwitz and Dachau, however, any statement against anti-Semitism and Nazism was rendered rather toothless. You don’t get many points for being right after the fact.

And yet, what makes OPEN SECRET an interesting film is the very fact that it follows the defeat of the Nazis but exists in a world where racism and bigotry are ongoing plagues. (In 2017, it must be said, the film feels uncomfortably relevant.) Among Reinhardt’s noirs, this is perhaps his darkest film — quite literally, since cinematographer George Robinson blankets the picture in shadows. The film begins on the street at night, and it ends the same way. In between those points there probably aren’t ten minutes of daylight in the whole picture. In John Reinhardt’s noirs, it’s always midnight in America.

Postscript: A quick word about George Tyne. In this film, he plays the plucky storeowner who helps Ireland bring down the gang. A few years after making this film, however, he was himself brought down by the House Committee on Un-American Activities. He was named as a Communist by actor Lee J. Cobb, and when he was called before Congress he refused to name names. He was cited for contempt of Congress and indicted by a federal grand jury in New York City. After being blacklisted he didn’t make another film for thirteen years.

NOTE: The film has recently been restored and preserved by UCLA and will be showing on Oct. 14th and 16th at the Gene Siskel Film Center in Chicago as part of its UCLA Festival of Preservation 2017.