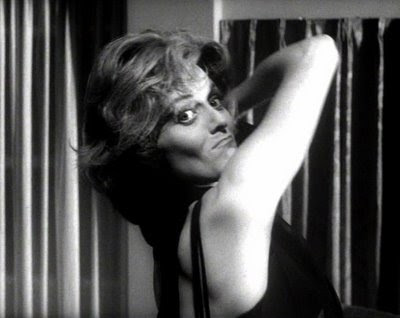 Among the great directors of film noir, Sam Fuller might be the one who most resembles a pulp novelist. His characters are stereotypes raised to flash point and his images pop off the screen like crisp, lurid prose. That’s nowhere more true than in his The Naked Kiss, a film with one of the all-time great movie openings. Without warning the movie starts: a woman is striking the camera as violent, jazz music boils away underneath. We realize she’s slapping a man around. He begs her to stop. They wrestle, and he grabs at her hair and a wig slips off her bald head. Now she’s really pissed off. After she’s beaten him senseless, she rolls him for seventy-five bucks. Then she picks up her wig, goes to a mirror and puts herself together. Then we get the credits.

It’s a hell of a beginning. The woman is a prostitute named Kelly. After she rolls the guy—who we later learn is her pimp—she skips town and winds up in a quiet little place called Grantville. It apparently has one cop, a plainclothes Captain named Griff. By all appearances, he hangs out at the bus station waiting for hookers to pull into town. He and Kelly have a twenty dollar fling (she talks him up from ten dollars), and then he tells her to get out of town. Nice guy.

Kelly doesn’t leave, though. Deciding to stick around and make a new life for herself, she takes a job at the hospital where she works in the sick ward for kids. She also meets the richest guy in town, JL Grant, a scion of old money who’s lucky enough to live in town that bears his family name. They fall in love—much to the resentment of Grant’s best friend, Griff the cop.

The film packs some big surprises in its last thirty minutes or so, and you are strongly urged not to find out anymore about the plot if you can avoid it. Fuller—who wrote, directed and produced the low budget film—takes his film into areas that are still shocking to viewers today. The last time I watched this film, I saw it with three friends who had never seen it before and during the scenes of revelation at the end, people actually gasped.

Fuller is film geek’s director—a man of uncontrollable passions and bedrock integrity. He made some fine films inside the studio system (Pickup on South Street, House of Bamboo), but he was simply too much of a loose canon and he spent much of his career trying to scrape up money for his low budget productions (like the amazing Shock Corridor).

The Naked Kiss was shot for about ten cents and looks like it, but Fuller works within these limitations like the pulp novelists he so closely resembled. Fast and efficient, he also had the good fortune not to be a perfectionist. His independent films are messy, but they’re not sloppy. He loved jarring visuals, and The Naked Kiss, with its ubiquitous shadows and slanted cameras, is noir down to its bones. Working without money or sets or stars, he nevertheless created a film that is, in its wild ass way, the visual superior of bigger budgeted and more politely directed movies.

He didn’t have stars, but he did have actors. The film is grounded by the fierce performance of Constance Towers as Kelly. This maybe the toughest broad who ever stalked through a film noir. With a soft spot for kids and old people, she is otherwise a block steel—with nice curves, of course. She kicks a lot of ass in this film—more perhaps than any female heroine who preceded her in American movies. Check out the scene where she goes to a brothel to slap around a madam who has been trying to recruit one of her friends. Kelly pounces on her and makes her eat twenty-five bucks in wadded up bribe money.

Fuller was after more than just cheap thrills, though. An iconoclast with a revulsion for hypocrisy, he casts his pitiless eye on small town America and consciously exposes the disconnect between reality and polite society’s view of itself.

Which is not to suggest that Fuller was a realist. Far from it. He liked grittiness for its own sake, and loved art’s ability to translate emotion and struggle from the shifting currents of life to a more manageable form. “Reality,” he liked to say “is a bunch of damn bullshit.” His theory, as least as I interpret it, was that since reality could never be less than everything and everyone all at once, the representation of reality in art was impossible. Thus an artist was not in business to put real life on screen; he was in business to recreate it in a way that made it interesting or insightful for the viewer.

This led to a style that is not for everyone. Fuller’s emotions are huge. Subtly is not a concept he understands or finds the least bit interesting. It’s not surprising to learn that The Naked Kiss—a film I admire and enjoy and which is highly thought of by many critics and directors—is in the book The 100 Most Amusingly Bad Movies Ever Made. Fuller doesn’t go over the top from time to time in this film. He blasts over the top in a rocket in the first scene and never looks back. The Naked Kiss is a thoroughly bizarre movie. Whether or not the viewer finds it great or terrible depends on the viewer, I suppose. But you should see it, either way. Fuller, love him or hate him, deserves to be confronted.

I'm in the it dept with Naked Kiss. I used to have a copy taped from TV in the 1990s (Must have been from BBC2 when they were good)