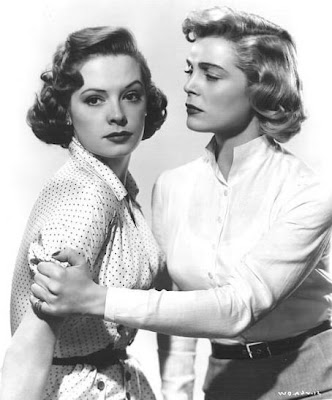 One of the ways film noir rewards obsession is to keep providing new combinations of your favorite ingredients. Something like John Cromwell's The Company She Keeps wasn’t designed to reward obsessive fans of Lizabeth Scott and Jane Greer by pairing them together—it should be remembered that neither actress was ever really a star and both were having career trouble by 1951—and yet here they are, two of the great women of noir locked together in a dark drama. For good measure, the movie even throws in Dennis O’Keefe and the cinematography of Nicholas Musuraca.

Alas, the resulting film is deeply flawed, if still enjoyable. Greer stars as Mildred Lynch, a parolee who relocates to a new town, becomes a nurse’s aide at a hospital, and sets out to steal Larry, the boyfriend of her parole officer, Joan Wilburn. She succeeds in whisking Larry away from Joan, but at the same time she gets caught up in a dragnet designed to catch her friend Tilly, a fellow parolee who has been stealing supplies from the hospital. Will she go to jail? Will Joan step in to help her?

This is all pretty low voltage stuff. Director John Cromwell could be an efficient enough craftsman—as he is here—but he never brought a lot to a movie. If he had a bad script (as with the execrable Dead Reckoning) he was helpless. Here the script is by Ketti Frings, a Pulitzer-Prize winning playwright who occasionally slummed it in Hollywood (she also wrote Dark City and The Accused). While her specialty was writing pictures featuring female protagonists, she never really distinguished herself at the job, and interestingly, the main problem with The Company She Keeps is that the roles haven’t been developed enough. This is particularly a problem in regards to Joan, the parole officer played by Lizabeth Scott.

As written, directed, and acted, Joan is just really, really nice. She seems to want to be Mildred’s friend, to help her, to show her the way to a happy life. Hell, Joan’s not even particularly upset when Mildred steals Larry (O’Keefe, serviceable in an underwritten part). She’s not mad at Mildred, and she’s not mad at Larry. She doesn’t even get mad when they announce they’re getting married. By the end of the film, you half expect her to be Mildred’s maid of honor.

There are a couple of huge problems with this, not the least of which is that she is supposed to be a parole officer. Did it occur to no one during the making of this film that parole officers are a bunch of hardasses? Scott could have played the role that way, certainly, but as written, Joan is a lovely, nicely dressed, well-mannered lady. Scott plays her like a Sunday school teacher. Dramatically, this makes Joan the weak link. When she finds out she’s been betrayed, the ball is in her court, but because she doesn’t do much except wish Mildred luck, the plot has nowhere to go.

Which is a pity because as Mildred, Jane Greer seems to be chomping at the bit to do something. In the late forties, she had been essentially banished from films for rebuffing the advances of RKO studio head, and chief ladystalker, Howard Hughes. The Company She Keeps was something of a comeback for her. Of course, the role of the selfish, coldhearted Mildred was also something of a punishment, Hughes’ way of casting her to “type” as a woman without a soul. Luckily, Greer was a trooper and excelled at playing these roles. The part of Mildred is underwritten—we’re never really sure what she has against her angelic parole officer—but Greer tears into it, making the character a wounded animal who is doing all she can to survive. It is a performance in search of a better script.

So what appears at first glance to be a match made in heaven—Scott! Greer! O’Keefe!—instead fizzles to a close. That’s the flipside of a noir obsession (and, I guess, life itself): all the missed opportunities. Still, even though The Company She Keeps has uninspired direction and a limp script, the fiery performance by Greer and the moody lighting of the great Nicholas Musuraca (Out of the Past, Where Danger Lives, Roadblock) make it a movie worth seeing.