VERTIGO, CITIZEN KANE, and The Greatest Movie Ever Made 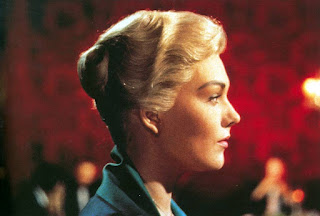 The big news of the week for cinephiles is that Sight & Sound has named Hitchcock's VERTIGO the greatest movie of all time, knocking Welles's CITIZEN KANE down to number two.

Let me say, first, that I called this. I predicted a few years ago that VERTIGO's march up the lists of all-time greats would eventually lead it to number one.

Interestingly, the two movies have a lot in common. VERTIGO, a flop upon its original release, was rediscovered by auteurist critics and has grown in reputation over the decades. It's seen as a personal film by a major director in full command of his craft. It's not a crowd-pleasing hit. Arty and inaccessible, featuring a brooding Bernard Herrmann score, it ends in a profoundly dark, even hopeless, climax. Everything in this paragraph could also be said of CITIZEN KANE.

Of course, all of this is ultimately pointless. As I never grow weary of pointing out, the very notion of "the greatest movie of all time" is an absurdity. Art is not a competition, no matter how many awards we concoct to make it look like one. Welles wasn't trying to make VERTIGO and Hitchcock wasn't trying to make CITIZEN KANE. Comparing them to see which one is "better" makes no sense. What would "better" even mean in this context? Is DUMB OR DUMBER better or worse than THE SEARCHERS? Is THE MALTESE FALCON better or worse than ABOUT SCHMIDT? The only rational response to these questions, it seems to me, is to ask why the comparison needs to be made at all. I suppose inside of genres you could build some comparisons (THE AVENGERS versus THE DARK KNIGHT RISES), yet I confess I'm still left wondering what the value of interposing a competition would be. Unless the two films in question are attempting to do exactly the same thing (which THE AVENGERS and THE DARK KNIGHT RISES are not) then the comparison says more about the viewer than it does about the viewed.

People like to debate--which is the only reason this debate exists in the first place. Proclaiming VERTIGO the greatest movie of all time is a way to assert your own authority in the question of greatness itself.  Not surprisingly, then, a backlash began the moment this new vote was announced. My own unscientific survey of Twitter and Facebook leads me to think that people who are invested in not being pretentious are taking this opportunity to shoot arrows into VERTIGO.

And this is precisely why, as a devoted Wellesian, I am thrilled that CITIZEN KANE has finally been booted off the pinnacle of cinematic Mount Olympus. Virtually every person I know who has seen CITIZEN KANE for the first time has come away from it disappointed. No movie can be all movies, so no movie can be the greatest of all movies. Different movies do different things, after all. Some are beautiful, some are sad, some are funny, and some are exciting. Some want to be scary, and some want to be sexy. Some get loud and some get quietly thoughtful. No one movie could be the "best" at all of these things at the same time. So for years people have brought different ideas of greatness, or just plain enjoyment, to CITIZEN KANE and have been let down--or worse, they have been confirmed in their suspicion that the highbrows who prattle on about greatness and art don't really know what they're talking about.

So let VERTIGO take its turn as the whipping boy in the battle between the snobs and the reverse-snobs. Hitchcock, like Welles before him, is enough of a giant to absorb the arrows. At least for a generation or two, when it will likely be Scorsese's turn.