Existentialism with a Happy Ending

Spoiler Warning: This essay concerns the way in which the endings of film noirs affect their meaning. As such, it gives away the endings of HE RAN ALL THE WAY, WHERE DANGER LIVES, THE DEVIL THUMBS A RIDE, and PITFALL.

Hardcore noir fans love an unhappy ending, and we all remember the best of the bleak. Everyone has their favorite doom-filled closer, but perhaps the most brutal final moment comes at the end of HE RAN ALL THE WAY (1951). John Garfield, fatally shot, stumbles down a sidewalk and drops dead in a rain splashed gutter. The End is his only epitaph, but Garfield is hardly the first noir antihero to go out this way. The downer final scene is as much a characteristic of film noir as tilted angles and cigarette smoke.

Which makes it all the more curious to observe how many noirs end on a high note. Crime pictures of the forties and fifties were, after all, no more immune to the dictated “Hollywood Ending” than were Westerns. Of course, manufactured cheerfulness was always the town’s chief export, but noir is defined, at least in part, by an opposition to the studio-mandated insistence that everything will work out fine. A major appeal of noir is that it tells the brutal truth about the end of things. Yet, many noirs are stamped with officialdom’s seal of approval: the last minute conversion to the cult of contentment.

What effect does this have on the films? After all, a story’s resolution is seldom inconsequential, and the right ending gives a film the aftertaste of perfection. Does it simply not matter when a film makes a swerve away from its tone and theme at the last minute? If the arc of a film is clearly bending towards doom, then how much do we discount its contortions to arrive at an ending designed to please a studio boss with his eye on the bottom line? 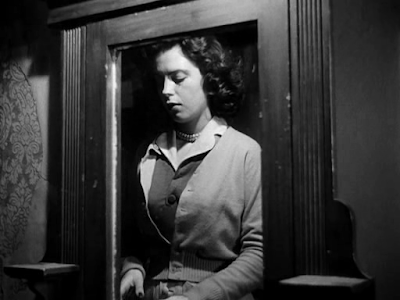 It depends, of course, upon execution. Often, a film will hurtle toward doom, and then at the last possible instant, it will swerve like a teenager playing chicken. Sometimes the film will even give us two endings, a downer followed by a burst of sunshine. In John Farrow’s WHERE DANGER LIVES (1950), a tacked-on happy ending steps on the end of a perfect, bleak finale. Robert Mitchum—everyone’s favorite fool for women—has spent an hour following beautiful psycho Faith Domergue (above) around Southern California as they run from the cops. At a sleazy border hotel, she decides she’s sick of him and, in a brilliantly staged scene, she smothers him with a pillow. Or does she? Since Mitchum made a career out of following sirens to his doom, the commutation of his death sentence here feels even more like an anticlimax. His last minute reprieve spares a foolish man the consequences of his attraction to a femme fatale, but we all know the movie would be better if Mitchum had died on the floor of that dirty hotel. The happy ending here is a clunky way to avoid the underlying logic of the story.

In the worst cases, the happy ending comes like a sloppy second thought. The end of Fleischer’s otherwise clockwork-tight THE NARROW MARGIN (1952) provides a particularly egregious example of the slapdash resolution. After revealing that gangster-girlfriend-turned-secret-witness Marie Windsor is actually an undercover cop, the film kills her off. Inexplicably, everyone in the movie promptly forgets about her. Charles McGraw and Jacqueline White stroll off sporting smiles, and Marie isn’t even cold yet. That cheerful final scene comes like a punch in the gut, but it does have the odd effect of making a rather dour point: nothing matters. You can die, but you will not be missed. In its way, the chipper last shot of THE NARROW MARGIN is as nihilistic as the final shot of HE RAN ALL THE WAY.

Of course, some happy endings function as ironic comments on the resolution of their plots. In THE DEVIL THUMBS A RIDE (1947), salesman Ted North is driving home to his loving wife when he stops to pick up a hitchhiking sociopath played by Lawrence Tierney. Now, Tierney— being Tierney—promptly turns North’s life into an unbearable hell. In the end, Tierney is gunned down by the cops, and we return to North in his car, this time joined by his wife. She giddily announces she’s pregnant—a cue for celebratory music and the fade out. It’s too late, though. North’s plunge into chaos, his glimpse of the void personified by Tierney, is only reinforced by the ending’s nervous reassertion of the power of family and middle-class security. Shakespeare, it should be noted, often followed a similar structure—just look at his proto-noir MACBETH. He begins with the kingdom in order, hurls it into chaos, and then, once the stage is awash in blood, he quickly reestablishes order just before the final curtain.

At its best, this reestablishment of order can be as complex and subversive as the chaos it seeks to replace. Perhaps the best example of the multilayered ending in noir comes at the end of Andre De Toth’s brilliant PITFALL (1948). We follow a married insurance investigator played by Dick Powell as he embarks on an affair with sexy Lizabeth Scott. Trouble is, Scott is being stalked by a psycho private eye played by Raymond Burr. One can easily guess that in 1948 the censors weren’t going to let adultery go unpunished, nor were they going to let Powell leave his wife. As De Toth told Alain Silver in an interview in 2000, "In PITFALL, we did have problems with the ending before the Hays Code would approve....You couldn't commit adultery…When the Hays office looked at the script, they said no, no Code Seal.” How the film finesses the end of its plot, however, is one of its more fascinating features. Scott shoots Burr, and Powell comes clean to his wife (Jane Wyatt). The film ends with Scott being led away by the cops and Powell reunited with his betrayed wife. The ambiguity here and the intrinsic sexism of the punishment is as complicated as a Douglas Sirk film. This is not an uplifting ending—it is neither happy nor comical—but it does satisfy the dictated reassertion of the moral code. Things are once again as they “should be” with the man returned to his family and the other woman being punished for tempting him, yet everything feels irreparably damaged. The film has met its obligation to censor and studio, but in doing so it has crafted a finale that is deeply subversive. This is appropriate. Despite some ostensibly “happy” endings, film noir’s business is exposing tensions, not resolving them. Beyond whatever tidy resolutions might be arrived at, we know there’s more trouble to come. This too seems fitting. As Orson Welles once noted, to arrive at a happy ending “it just depends on where you stop your story.”

A previous version of this essay appeared in the NOIR CITY SENTIEL ANNUAL #2.