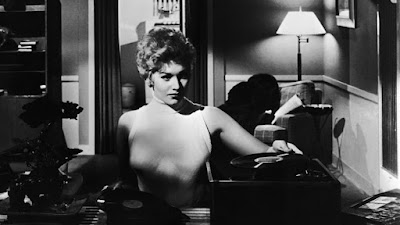 For much of her career, Kim Novak was considered little more than a Marilyn Monroe knockoff. Buxom, with a husky whisper of a voice, she was generally dismissed as another pretty blonde with no real talent. Then, as the years passed, something odd happened. Critics and filmmakers started talking more and more about that rather disappointing Hitchcock film she made back in 1958 with Jimmy Stewart called VERTIGO. More and more people started talking about how good it was. Its reputation grew to the point that today it is widely considered both Hitchcock’s masterpiece and one of the very best films ever made. Along with the reputation of the film, the critical consensus on Novak shifted. Maybe she wasn’t just another fifties-era hourglass figure, after all.

An excellent second stop on this road to reevaluation is Richard Quine’s excellent 1954 bad cop drama PUSHOVER starring Novak and Fred MacMurray. The film begins with a nicely choreographed bank robbery that plays without fanfare or dialog. Two men knock over a bank, and the robbery goes off smoothly until a heavy-footed security guard makes a clumsy attempt to stop them. They shoot him down and abscond with the loot.

In the next scene we see a pretty girl in a mink coat get picked up by a man outside a movie theater. She’s Lona (Novak) the girlfriend of one of the bank robbers. The man who picks her up is Paul Sheridan (MacMurray). At first he just seems like an overly confidant ladies man, but we quickly discover that he’s actually an undercover cop. His superior officer (hardnosed E.G. Marshall) wants Sheridan to get close to Lona so they can drop the net on her bank robber boyfriend.

The cops stake out Lona’s place. Sheridan is joined by his upright partner Rick (Phillip Carey) and a hard-drinking old timer named Paddy Dolan. These guys are not the best stakeout team. Paddy likes to leave his post to zip down to a nearby cocktail lounge for a snort or two, while Rick is overly interested in the pretty nurse who lives next door to Lona. He wants to ask her out, but he’ll probably have a hard time explaining to her that he developed a crush on her while peeking through her windows with binoculars.

The big problem, though, is Paul Sheridan. Unbeknownst to his partners, he’s fallen in love with Lona. And Lona, being no fool, has quickly pieced together the situation with the cops. She makes Sheridan a proposition: why don’t they kill her bank robber boyfriend when he shows up at her apartment and keep the two hundred grand from bank score for themselves? This plan will require Sheridan to juggle his lover, his superior, his partners, the bank robber, and the neighbors all at once. I hope I’m giving nothing away by saying that his attempt to keep all these balls in the air is a spectacular failure—spectacular in every sense of the word.

PUSHOVER is 100% hardcore noir. Richard Quine also directed the excellent heist film DRIVE A CROOKED ROAD, and with both films he shows a flawless grasp of the bleak world of film noir. He’s good with actors, keeping performances understated even when the material is heating up, and his handling of action and suspense is superb. Notice how deftly he moves the scenes between Sheridan and his drunkard partner Paddy as they head toward a collision with each other. Or note the excellent use of crane shots, like the one that follows three characters down a darkened city street to their doom. Most of all, notice the handling of mood—at once perfectly controlled on the surface and turbulent underneath.

The script was based on two novels—RAFFERTY by Bill Ballinger and THE NIGHT WATCH by Thomas Walsh—adapted by the enormously talented writer Roy Huggins. A novelist himself who also wrote many good films including the masterpiece TOO LATE FOR TEARS, Huggins took the bulk of the bad cop story from THE NIGHT WATCH and melded it with some of the cop-and-bad-girl material from RAFFERTY. The result is an ingeniously evolving plot (perhaps I should say devolving plot since things keep going wrong). The story is not a mystery, but Huggins plants clues as to where it’s going. Early on, we get a conversation between the cops that seems inconsequential, but later seems to be at the heart of things.

Rick: Money? It’s nice, but it doesn’t make the world go around.

Sheridan: Doesn’t it? Do you know anybody who’s happily married who hasn’t got plenty of it?

Sheridan: Yeah? My folks hated each other. Fighting all the time…and always about money.

The performances are all top notch. MacMurray is perfect as Sheridan, giving us an amoral cop who is nearly smart enough to pull off his master plan. Some people will disagree, perhaps, but I think this, not DOUBLE INDEMNITY, is MacMurray’s best noir performance.

And Kim Novak is stunning here. Firstly, and I don’t say this flippantly, she is staggeringly sexy. The filmmakers contrive to put her in so many sexy outfits it starts to get a little silly—one outfit is a sheer braless number that Quine goes out of his way to emphasize—but the essence of the character is, after all, her affect on men. She’s the kept woman of a bank robber, and she’s considering making the switch to being the kept woman of a crooked cop. She’s a femme fatale for sure, but Novak sells the role in the same way that Lona is selling more than just the promise of the greatest sex in the world. There’s always something a little sad about Novak. For a supposed bombshell, in fact, her sadness was always dangerously close to the surface. If Monroe made it seem like the party would never end, Novak made it seem like the end was just around the corner. You see it in VERTIGO, and you see it here. Her appeal isn’t just sex, after all, it’s need. I’m sexy, she seems to say, and I need you to take care of me. It’s very easy to see why a man might throw away his life trying to do just that.

PUSHOVER will be playing this Saturday at the Gene Siskel Film Center.

You can find "The Crooked Road of Richard Quine" my piece  on the noir career (and, in some respects, the noir life) of PUSHOVER director Quine (including his offscreen affair with Kim Novak) in my book THE BLIND ALLEY.

The British Film Institute officially replaced Citizen Kane with Vertigo at the top of it's All Time Best Movies List about 10 years ago. Richly deserved too!

Perhaps Novak was dismissed because she seemed so inaccessible – a quality that made her perfect for "Vertigo." I liked her in the Kirk Douglas picture, “Strangers When We Meet,” which was also directed by Richard Quine.

I think there's something to the idea that Novak was dismissed because she was inaccessible. She was so often guarded, as if concealing some old hurt. You look at her in something like 5 AGAINST THE HOUSE, which is not a great movie, where she is given little to do but be pretty, and she's still the most compelling person in the film. And, like you, I really dig STRANGERS WHEN WE MET, a project that grew out of her very public affair with the married Quine. They decided to tackle the Evan Hunter book after Quine left his wife for Novak during the making of BELL BOOK AND CANDLE. Despite Douglas's unhappiness with the picture, I think it's an interesting piece of work.

Concealing an old hurt, is very well put. I think you nailed it. But, the hurt seemed so deep that it kind of turned me off. Maybe men in the audience imagined cheering her up. – By the way, I liked “5 Against the House,” but what I mostly remember was the climax in that crazy parking garage. Phil Karlson really knew how to handle action.

Yeah, I like that climax, too. Did you see the fourth Mission Impossible (Ghost Protocol?) with the big fight in a crazy parking garage. Really made me wonder if Brad Bird likes 5 Against the House.

I have not seen that one. But now I’ll check it out.